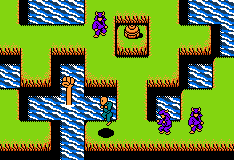 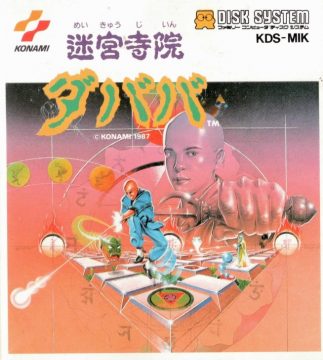 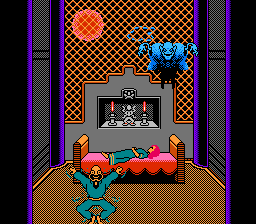 The story takes place in the village of Pataliputra in ancient India. The monk Vimara is in charge of guarding a temple, which has sealed the evil spirit Dababa. One of his disciples, Lydon, accidentally releases Dababa from his slumber, and disappears. Over the course of three years, young women from neighboring villages begin to vanish. Eventually, Tanya, the only daughter of Vimara, is kidnapped by Lydon. Vimara’s other disciple, an orphaned boy named Shiva, enters into the temple in order to save her, face off against his former training partner, and defeat Dababa. The game features a total of four areas, each with between six and 10 substages. 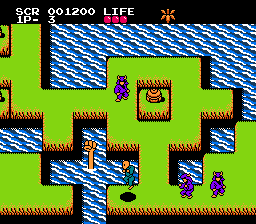 Taking the “square tile” based progression of many classic NES puzzlers to its logical conclusion, in Dababa, your character doesn’t move freely, but hops between squares. You can also hop over a single empty square, like water or a lava pit. You can also jump in place, which lets you trigger the tiles more easily (they have to be hit three times), but you can’t jump over enemies, as you remain on the same plane as them. This really changes the pace of the game, as you’ve got a sort of “stop and turn” mechanic going on, rather then the traditional twitch-based gameplay of your average overhead actioner. 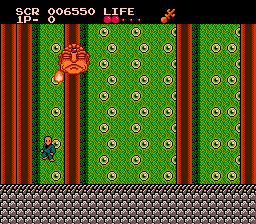 Apart from that, it’s very much a maze game, where you must find a trigger to open the door and then figure out a way to get to the exit. In the first stage of each area, this involves shooting all of the statues and/or trees, some of which will grant you power-ups, and one that will open the exit. In the other stages, you just need to reveal all of the “key” tiles, collect the glowing book, and then escape. Sometimes the game tricks you with fake exits, forcing you to restart the stage, or worse, sending you back to a previous level. Other times, the “real” exit is hidden, forcing you to experiment to find it. 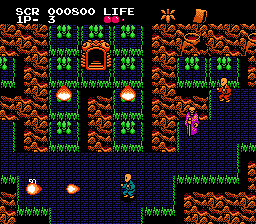 That’s not to say there isn’t action, though. You have to keep moving, as enemies keep spawning and attacking constantly, and the environmental hazards force you forward. The limitations of movement come into play with many of the puzzles, as well as the way you approach enemies. If there’s an enemy shooting at you, it’s not as simple as other games where you could just get a bit out of the way and then return fire. In Dababa, you have to move a whole square out of the way, then turn around, then go back. In many ways, the awkward movement and tile-hopping is a prototype for Nintendo’s Startropics. 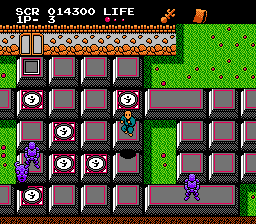 Given that enemies constantly respawn, it’s in your best interest to get through as quickly as possible. In some levels you’re forced to do this anyway, as the floor starts disappearing. Sometimes it can feel like one big chase scene, where you must make decisions and precise movements under constant pressure. At least there are plenty of upgrades to find. Additional weapons include arrows, fireballs, triple shots, and what appear to be similar to very large bowling balls. Your health can also be extended by several hearts, and a certain item will even halve any damage you take. Another item will kill all on-screen foes, although that only yields a temporary breather. 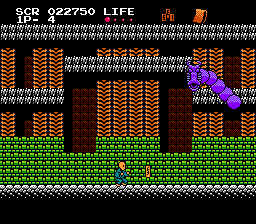 As the game moves on, you’ll have to use trial and error to understand a level and piece together solutions to each obstacle, all to be implemented in a single run. In later stages, there’s no time for exploring while “performing” a correct solution to a level – you’ll have to already know it and have practiced it to get through in time. It becomes one of those games where the best and sometimes only way to defeat it is with a “perfect” solution, moving in an exact pattern and modifying it only to avoid or take out enemies. It also gets a bit unfair, as some enemies can move in quite annoying ways and you have so few options to avoid them. Worse, you can get that old-school “enemy spawns randomly in the worst possible spot” situation, ruining your perfectly executed run through no fault of your own. Some foes are also invincible and simply must be avoided, despite their erratic movement patterns. Luckily there’s a save feature, as Dababa would be brutal without it. 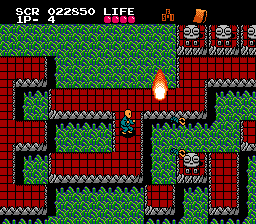 Boss fights break up the action, and are fought in side-view with floaty controls. It’s strange, seeing as your monk can jump up almost the entire height of the screen, but it’s required to more easily move around the area. It’s also aggravating that you can’t simply face left or right – you must hop in that direction, which is sure to cause extra damage. 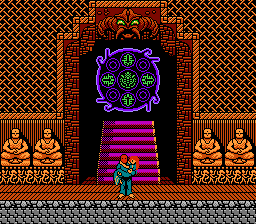 The graphics are quite pleasant while not spectacular, with nice details that give the whole thing character. The mysterious temple feel has been nicely captured, and the mixture of Hindu and Buddhist imagery is appropriately exotic. The soundtrack, as with most of Konami’s FDS work, is fantastic, with a series of great “Indian” sounding tunes that utilize the extra sound channel to great effect. There aren’t many tracks though, and with the large number of levels, it can get repetitive. 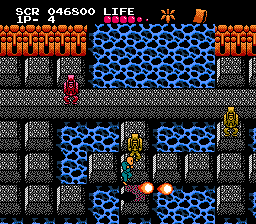 In the end, Dababa is another high quality effort on the FDS, and while not quite as much of a lost classic as Almana no Kiseki or Ai Senshi Nicol, it’s still a shame it wasn’t brought over to the NES.