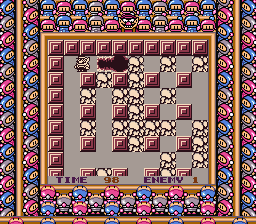 For Bomberman’s return to the Game Boy four years after Atomic Punk, things get strange in more ways than one. Known as Bomberman GB in Japan (the GB stands for “Great Battle” and “Game Boy” according to Director/Game Designer/Graphic Designer Norio Okubo), this entry completely changes the single player formula into something that more closely resembles the multiplayer mode and forgoes all previous story elements for a uniquely small scale scenario. And yet, that isn’t the strangest thing about Bomberman GB; when it was brought over to North America and Europe, it was renamed Wario Blast: Featuring Bomberman! and had Nintendo’s then-new villain shove Bomberman out of the leading role. The reason behind this crossover has never been explicitly revealed, but it’s reasonably likely to have been for marketing purposes, an idea that sounds like it worked considering the game was cited as the one of the “Top Game Boy Games of 1994” (#4 to be exact) in issue 68 of Nintendo Power. Norio Okubo has spoken about the game on Twitter, stating that Wario was chosen over Mario because blowing things up with bombs seemed out of character for Nintendo’s leading man. Despite being a new character with less than perfect morals, Nintendo still had very strict, Disney-esque rules for what Hudson Soft could and couldn’t do with the character. Even with all the effort it took to implement Wario, his presence doesn’t change much about the English versions, only resulting in some different visuals should you choose to play as him.

Bomberman GB tells a simple tale of Bomberman riding around on his new motorcycle, only to have it stolen from him by a group of Bombermen known as the “Madbombers” per the Wario Blast manual. Along with his new ride, Bomberman had four other power-ups stolen as well, so he’ll have to fight his mysterious foes in order to get them all back. In Wario Blast, Wario somehow finds an interdimensional portal that grants him access to Bomberman’s world. Being the greedy capitalist that he is, Wario sees the presence of the Madbombers as an opportunity to make money and enlist some additional labor by force, so his story becomes one of conquest similar to that of his debut role in Super Mario Land 2 but on an even more diabolical level.

Instead of having to work your way through mazes full of different enemies, every level here has you facing off against one, two, or three opponents. If you’re playing Bomberman GB or playing as Wario in Wario Blast, you’ll encounter the Madbombers in each world, but if you play as Bomberman in Wario Blast, you’ll fight multiple Warios instead, which looks pretty odd! For each level, the goal is to win two out of three rounds similar to how multiplayer matches play out. Because of this different setup, power-ups no longer carry over between levels, though they’re now common enough that building up your power levels is very easy to do. Power-up variety in general has been greatly scaled back, leaving only firepower boosts, bomb capacity increases, and the skull item. This paring down of options is contradictory to the multiplayer focus of this entry and results in most matches playing out the same way. Each area naturally has its own hazards to account for too, such as tiles that redirect kicked bombs, paralyzing gas, and teleporters that warp you elsewhere. After emerging victorious from three levels, the Madbombers (or Warios) will fuse together to become the area’s boss and these encounters play out exactly how you’d expect. While the bosses in this entry aren’t particularly exciting since most of them rely on the same idea of only being vulnerable during an attack, they do at least have some of the most bizarre designs yet, including a teacup monster and a stuffed animal that floats using balloons.

After clearing an area (up through the fifth area), you’ll be blessed with a permanent power-up that greatly changes the way you can approach stages. Some of these will be familiar to those who have played the previous games, such as the trusty bomb kick and line bomb powers, but some of the others include new options like the ability to dash by holding the B button (thus making up for the removal of the speed power-ups) and the ability to tackle enemies and stun them. The final power-up you get is the motorcycle from the intro, which lets you hop over hard blocks. This is a fun idea in how it gives you a stronger sense of progression than the series has seen up to this point, but the game isn’t balanced for it at all. Getting access to such a wide array of abilities while your opponents only get the bomb kick after a certain point means that you always have a tremendous advantage. The dash and motorcycle let you run circles around enemies and the tackle allows you to set up guaranteed kills. Simply tackle an opponent into a wall, drop a bomb where they are, and watch with glee as they find themselves unable to escape the blast. The AI of your opponents is pretty bad too; they’ll occasionally kill themselves for no reason and they’re oftentimes very passive to the point where they prefer to keep jumping into teleporters instead of trying to fight you. There’s an undeniable bit of pleasure from being able to dominate and toy with your opponents using your absurdly powerful arsenal, but it does result in a game that’s far more repetitive and simpler than the games that came before it.

Once you’ve gotten the motorcycle from area 5, the rest of the game plays out the same and completely lacks in surprises. That is, except for one somewhat novel surprise hidden within the game’s password system; by entering a specific code for Bomberman or Wario, you can partake in “The Battle”, which is an endless survival mode that pits you against opponents for as long as you can last. There’s not much to it since the opponents don’t change and it takes place in an empty arena, but it’s a good idea that the series has yet to try out. Despite some solidconceptshere and there, the repetitive structure, the low difficulty that can’t be adjusted, and the paring down of various features make Bomberman GB one of the weaker single player experiences in the series.

Bomberman GB makes some of the best use of the Super Game Boy out of any game to support it. Aside from the typical color enhancements and unique borders, using a Super Game Boy allows Bomberman GB to be played with up to four players, which is a pretty significant upgrade when compared to Atomic Punk. Though the battle mode suffers from the same limitations of the single player mode, it does at least let you toggle the five major upgrades on or off, allowing you to play a tamer game or one that allows everyone to zip around and tackle each other into oblivion. Battle mode, like many would expect from a Bomberman game, is the strongest selling point for Bomberman GB if you have a Super Game Boy as it provides a novel, though likely fleeting alternative for those who have bled the many options of Super Bomberman 2 dry. Bomberman GB was also featured in the Game Boy Bomberman Collection and the Korea-exclusive Bomberman Selection, with the latter having the same color upgrades that Atomic Punk did as well as the only English localization for the original version of Bomberman GB.