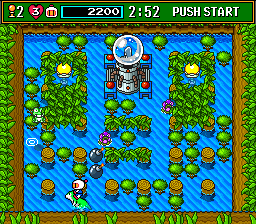 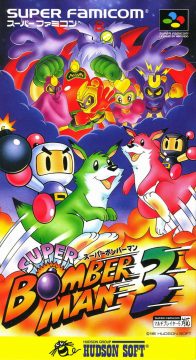 Compared to the advancements and experiments of the previous few games, Super Bomberman 3 is an exercise in déjà vu. Instead of continuing with the gimmick-laden levels of Super Bomberman 2 or the structural changes of Bomberman GB, Super Bomberman 3 takes things further back, echoing many aspects of Bomberman ’94. They’re not the same game, but they come quite close at times! They even went as far as to copy its absence in North America (not counting Mega Bomberman), leaving it exclusive to Japan and PAL regions. This was due to the closure of Hudson Soft’s USA branch in 1995, though the SNES was certainly getting up there in years at this point too.

Interestingly, despite being so similar to Bomberman ’94, only two staff members are shared between the games – Jun Chikuma and art director Shoji Mizuno. Though there’s minimal overlap, the PC Engine games were very clearly the template here, to the point that the visuals are nearly identical to those games instead of carrying on the more unique look of Super Bomberman 1 and 2. In doing so, Super Bomberman 3 does serve as a way to get Nintendo gamers who never had a PC Engine up to speed with what they missed. Alongside a single player mode that’s comparable to the best outings of the series so far, this game also offers a robust multiplayer mode with some new characters and features like “Bad Bomber” mode that would go on to be notable components of future entries.

The Five Dastardly Bombers have been repaired by Bagura and are once again ready to cause trouble. This time, they take a page out of Black Bomberman’s book and enact a scheme similar to the one he tried in Bomberman’93 by stealing the chips out of the United Planet Federation’s mother computers across five different planets in the Bomber Nebula. Just like in Bomberman ’94, there’s a jungle planet, a fire planet, a water planet, and a snow planet, as well as a final confrontation on Bagura’s ship that has you climbing multiple floors without a break. The one difference is a desert planet replacing the castle area, serving as a throwback to Bomberman ’93 instead. The reuse of these themes is odd since it means that none of them (aside from the fire planet) feel designed with the abilities of the Five Dastardly Bombers in mind, something that Super Bomberman 2 went out of its way to ensure through its more complex level design. Black Bomberman returns as an ally for the first time since the original Super Bomberman, once again allowing for simultaneous cooperative play.

All of the mechanics seen in Bomberman ’94 appear here with minimal changes. Levels are broken up into multiple smaller screens instead of the more sprawling ones seen in Super Bomberman 2 and you can revisit old ones if desired. This game marks the first appearance of Louie within the Super Bomberman subseries so far, though the pink dancing Louie was unfortunately removed and replaced with a brown one that grants you the line bomb ability. Though the Five Dastardly Bombers return, the battles against them are no longer two phase affairs; instead, they skip right to the part where they pilot some kind of mech to destroy you. The mechs on offer are just as unusual as they were in the past, including things like a fox, a volcano with arms made out of fireballs, a turtle with a dome of water for a shell, two cacti stacked on top of each of wearing a sombrero and a poncho, and a regal woman that looks innocent until she prepares an attack, donning a sinister grin when that time comes. The final fight against Bagura is an exception to the new rule and he’ll pilot a massive Voltron-style mech made up of the Five Dastardly Bombers and their abilities only after you’ve beaten him on foot, making for quite a challenging finale. 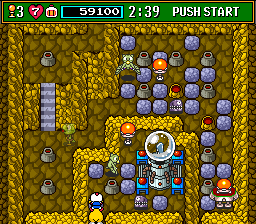 Thanks to the use of an extravagant presentation on a concert stage, the battle mode makes the story mode feel like the opening act for the main event that everyone’s really here for. Like in Bomberman ’94, battle mode allows you to play as different characters, but they don’t have unique AI behaviors or any other differences in combat. Taking a cue from Panic Bomber W, the World Bombers return in this mode, though more regions are represented and some of the representatives for each region have different designs or are different characters entirely. Bomberman and Pretty Bomber represent Japan and France respectively, and then you have Metal Bomber (England), Bomber Uhho (Kenya), Bomber Chun (China), Bomber Cossack (Russia), and Mexican Bomber (Mexico).

While their designs lean toward the stereotypical, each character is charming in their own way and has unique animations for winning, losing, being blown up, and are even given an idle animation. This partially applies to the single player mode as well – stand still while riding a Louie and Bomberman will pet it in an adorable display of affection! 12 stages are available this time around (two need to be unlocked with a cheat code), but to sweeten the deal even further, cheat codes can be used to select one of four different “battle groups”, which change the layout, items, and gimmicks of the first ten stages. It’s a shame such a game-changing feature was reserved for cheat codes, but having easy access to them now via the internet makes Super Bomberman 3 the most expansive multiplayer outing yet. 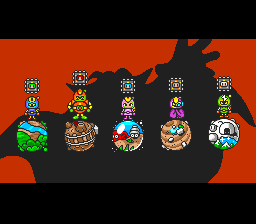 Aside from the new characters, this game’s battle mode offers some new options as well. The name doesn’t make its function clear at all, but Bad Bomber mode allows defeated players to continue playing by riding a cart on the outer edges of the battlefield. The cart is only capable of shooting out one weak bomb at a time, but its use can make a tremendous difference in certain situations. Clever cart riders can wait for someone to approach a soft block and then trap them from behind using a bomb. Hitting a player on the head with a bomb will stun them, potentially giving another player a chance to take them out. If you want to be a jerk, you can always ride along the edges of the arena and intentionally destroy power-ups so no one can get them.

If Sudden Death is enabled, carts are removed once it begins, a smart choice considering how easy it would be for cart players to prey on those who remain as they’re stuck in a narrowing arena. This mode adds a ton of additional chaos to an already chaotic game and can be an absolute blast for full groups of players or for those who aren’t confident in their skills and don’t want to be stuck sitting out matches early. Later implementations of this mode allow players in carts to return to the battlefield if they manage to take out another player, giving the outcome of games a Mario Party level of exciting unpredictability.

Soccer Bomber is the other addition and it serves as a replacement for the Golden Bomber roulette in the previous Super game. The winner of a match will get to do a penalty kick and shoot a ball at one of several Louies holding power-ups. The Louies shift around to try and obfuscate where the power-ups are, and whichever one the player hits determines the power-up they get for the next round. If desired, a cheat code can be entered to make it so players who win a match become the Golden Bomber for the next round, allowing for the best of both worlds. 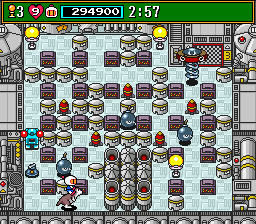 Super Bomberman 3 is a strong outing in a series that has remained mostly consistent for years up to this point, but for those who have been following Bomberman through the early 90s, it doesn’t necessarily feel as “Super” as it could be. For those familiar with the PC Engine games, Super Bomberman 3 may feel far too safe and arguably like a sign that Hudson Soft was running out of ideas. More charitably, one could also consider this game a “greatest hits” and a last hurrah of sorts for Bomberman’s excellent run on the PC Engine that had officially come to an end with Panic Bomber. In that regard, it shares similarities with Super Bonk, another game meant to respectfully sendoff one of Hudson Soft’s iconic characters on a different platform due to the end of the one he previously called home. Regardless, the series is never too keen to rest on its laurels for long – the latter half of the 90s in particular would go on to be a time of many innovations for the series, both on consoles and on portable devices.