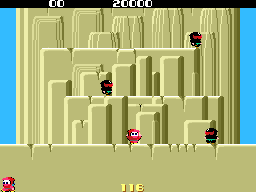 Few are aware of it, but Ninja Jajamaru-kun was one of Jaleco’s most prolific franchises back in the Famicom days. The stubby little bug-eyed ninja, hero of his own 1985 Famicom title, eventually went on to star in several other games, going through significant design overhauls in the process. Similar to Sega’s Alex Kidd series, Jaleco plastered him in so many different games that there’s barely any consistency among them. Most of them are side-scrolling action platformers, but there are a few RPGs mixed in, too. The quality also wildly varies from game to game – some are pretty good, although one would be hard pressed to call them classics. After a number of 8-bit titles, the series went pretty quiet, outside of some attempted reimaginings for the 32-bit and portable consoles.

The series actually began as an arcade title called Ninja-kun, released in 1984 by a company called UPL (known for Atomic Robokid and a few other low-profile titles.) Jaleco was responsible for porting the title to the Famicom, but they ended up reusing the character in their own home release, redubbing their new game Ninja Jajamaru-kun. UPL continued with their own Ninja-kun lines while Jaleco practically turned him into their mascot, even though they were essentially the same character. Many installments were actually scheduled to be released in America, but were canned for unknown reasons. The only games that did make it were the original arcade games – bearing the title Ninja Kid – and two of the Game Boy titles, retitled Ninja Taro and Maru’s Mission. It wasn’t until the release of the original Famicom game on the Wii Virtual Console that Jajamaru-kun made his official debut to Westerners. 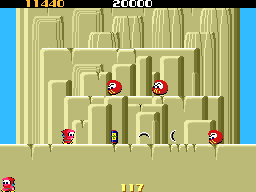 Like most retro arcade games, the goal in Ninja-kun is simply to kill all of the enemies in each stage. Each level scrolls directly upward for a few screens, which are comprised of several cliffs. Ninja-kun attacks with shuriken, which can also be used to block enemy projectiles. Running into foes only temporarily stuns the hero, but getting hit by enemy fire kills him. However, it’s also possible to stun enemies by jumping on top of their heads. There are only three stages, which repeat over and over, adding new and more difficult enemies as you progress.

Every once in a while, floating balls fall from the top of the screen. If you collect three, you are taken to a bonus stage where you need to collect all of the orbs in a stage in a certain amount of time.

For a game made in 1984, Ninja-kun actually looks pretty good. The sprites are small and squashed, but they’re colorful and detailed. The hero’s most notable characteristic is his eyes, which bug out in a panic whenever he’s stunned or killed. The only real major problem is posed by the odd jumping controls. You can only jump if you’re running left or right and hit the jump button. If you’re standing still while pressing the button, you leap down to the cliff below instead, which is quite confusing.

Ninja-kun was also ported to the Famicom by Jaleco, but the controls are pretty awful and the game feels pretty buggy. The various computer versions are no better and suffer even worse from some technical constraints. Between 2004 and 2005, a company called CatalyStar put out a whole bunch of Ninja-kun mobile games, among them a port of the original called Ninja-kun EX. The NES verson is also available on Nintendo’s Virtual Console, but only in Japan. The game was first released internationally in 2015 for the PlayStation 4 by Hamster, as part of their Arcade Archives series.

It should be noted that this has nothing to do with the NES game Ninja Kid, which is actually an adapted version of the Famicom game Gegege no Kitarou, or the Taito arcade game The Ninja Kids, a humorous side scrolling beat-em-up. 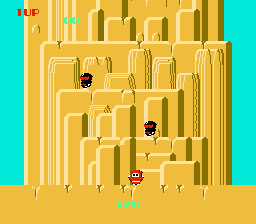 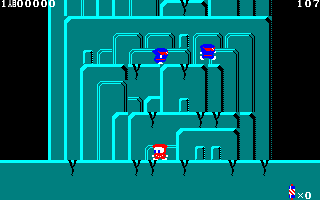 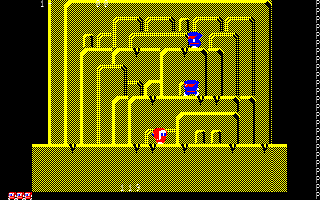 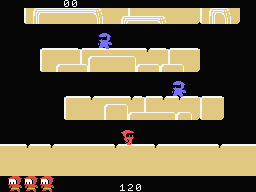 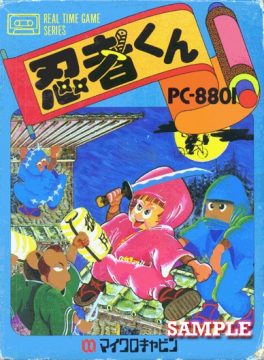 The first game to bear the title Ninja-kun was actually developed neither by UPL nor Jaleco. Instead Micro Cabin published the game for PC-8801 and MSX computers. The gameplay is very barebones – the ninja hero just has to run back and forth horizontally, to get up to the next floor once he reaches the opposite end. All the while he has to avoid the attacks of hostile ninjas. There are a lot of different items to pick up on the way, but they all amount just to different amounts of score bonuses. 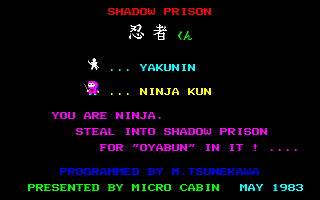 There is no connection between this and the later games, according to the designer of the arcade game. The name, the font with the two shuriken in the first Kanji character, and the red cloak are coincidences. 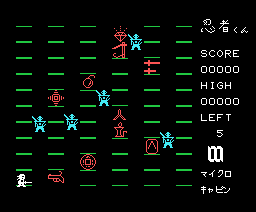 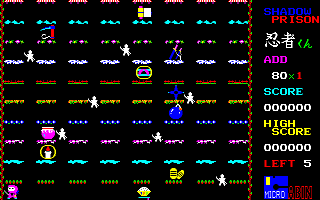 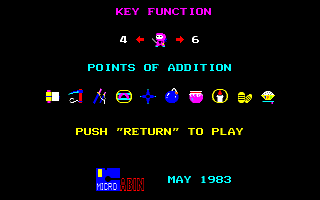