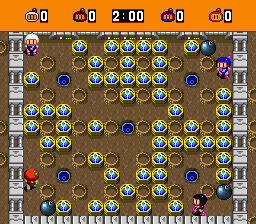 With how successful the Super Famicom was by 1993, it was about time for the Bomberman franchise to make its return to a Nintendo platform. While this might have seemed counterproductive for the PC Engine, Nintendo’s market share was simply too big to ignore. To capitalize on Bomberman’s growing reputation as the premier console deathmatch experience, Super Bomberman was packaged with the Super Multitap, making it the first game on the platform to support four players. This decision paid off and Super Bomberman became successful enough for Hudson Soft to justify releasing four similar sequels on the same platform. This is the point where the series really started garnering acclaim outside of Japan, receiving editor’s choice accolades from outlets like Gamepro and Electronic Gaming Monthly as well as a four page spread in issue #53 of Nintendo Power. Back in the game’s home region, a 4-koma comic strip series dedicated to the Super Bomberman games began in CoroCoro Comic in 1993 as well, further solidifying the fact that this game was a big deal. 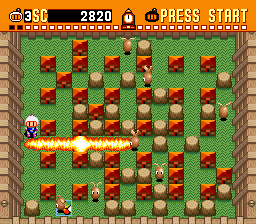 Super Bomberman amalgamates ideas from the franchise’s history, picking up where the 1990 PC Engine game left off, combining that with several ideas from the arcade titles, sprinkling in the general variety of Bomberman ’93, and topping it off with a few additions of its own. The story now centers on a new villain, Carat Diamond, along with his sidekick Dr. Mukk and their plan to host a robot tournament north of White Bomberman’s new home of Peace Town. To win said tournament, the two plan to kidnap White Bomberman by utilizing a fake Bomberman clone, but their machinations are interrupted by Black Bomberman. The clone defeats Black Bomberman and takes his castle, leaving him no choice but to join up with his rival in order to defeat the new villains in town. This entry marks Black Bomberman’s turn from villain to hero and is the first console game in the series to offer two player co-op as a result. Curiously, the brief intro that establishes the plot is only in the Japanese version of game, whereas that context is confined to the manual for the other versions.

Super Bomberman contains several strange tweaks that result in a more uneven experience than the polished Bomberman ‘93. Immediately upon starting a stage, players are invincible for several seconds, which allows for a very effective trick – whenever a player is invincible in a Bomberman game, they can place a bomb down, have it explode, and then place another bomb down in the first bomb’s explosion to have that second bomb go off instantly, allowing them to chain together explosions for as long as they’re invincible. Combined with the removal of scrolling stages and environmental hazards, this means that some levels can be cleared out before the player is in any danger at all. The bomb kick also received a significant buff and the player can now damage enemies by kicking bombs into them. As long as you don’t make any careless mistakes, you can defeat anything except bosses without having to approach, which feels a bit busted. Continues are now infinite and players respawn immediately upon death as well, making this one of the franchise’s easier entries. 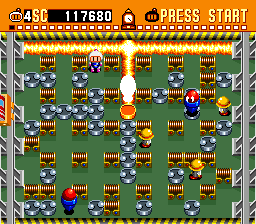 The most creative ideas of Super Bomberman really stand out compared to the campaigns before it. Each of the game’s six areas now contain multiple backgrounds and differing appearances for both types of blocks, keeping things fresh throughout. A lot of stages do end up using a similar futuristic aesthetic anyway, but some areas include things like treasure chests and moving flowers taking the place of the soft blocks. The fifth area deserves special mention, as it eschews the usual eight stage format in exchange for the robot tournament mentioned in the game’s story. In this area, you have to fight your way through multiple 1v1 matches with progressively tougher Bomberman clones, making for a great way to mix up the campaign formula.

In terms of new power-ups, the full fire power-up gives you maximum firepower instantly and the red bombs allow your explosions to penetrate through soft blocks. Both power-ups reappear throughout the series from here, though the red bombs eventually get a new look in the form of the spiky piercing bombs. The biggest addition here is the boxing glove, which allows Bomberman to punch bombs, causing them to bounce three spaces forward. Like with the bomb kick, bombs that make contact with enemies will deal damage, and while aiming the punch is trickier, the ability to have your bombs bypass blocks and walls is a powerful tool indeed. In an uncharacteristic move for the franchise, the showdown with Carat Diamond actually requires you to have the boxing glove. Since he uses a machine to fly above you, the only things that can hit him are punched bombs, and if you don’t have the boxing glove, you’ll have to wait until it spawns. While it’s distinct compared to the other bosses, this idea does make for an obnoxiously tedious fight if you’re not prepared.

Visually, Super Bomberman makes some nice improvements upon the previous games, with the biggest improvement being the character sprites, though the smaller enemies no longer have unique animations for being blown up, which is an unfortunate downgrade. Both Bomberman and his enemies are larger than ever and the bosses in particular stand out as visually impressive. The first boss wields a giant hammer and every time he swings it, the ground shatters and produces debris, exemplifying the boss’s strength. The robot tournament in the fifth area has a full crowd of people cheering in the background, helping to establish the proper atmosphere for the battles ahead. The enemies aren’t as strange as those in the arcade games or even Bomberman ’93, but if you’re hungry for some good old fashioned weirdness, Super Bomberman at least has you covered with its second boss, a gigantic floating clown head that shoots electricity and gets visibly upset whenever you damage it.

Much of the music is taken from previous entries and has a light, airy tone to it reminiscent of flutes and pianos. It’s a refreshing take on familiar territory and the new tracks are generally strong as well, with the dramatic boss theme being a particular highlight. The only track that doesn’t quite work is the one used for area four, which is a bit too shrill to be pleasurable for long. Jun Chikuma returned as a composer under the Atsushi Chikumapseudonym, but she was also accompanied by Tomoyuki Hamada. Hamada doesn’t appear on any entries after this, but he would go on to have a long career providing sound and music composition for games like Jumping Flash! and Evil Zone. 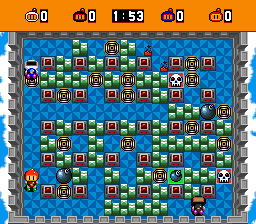 Super Bomberman had a lot to prove as the first four player game on the console and it succeeds in delivering the strongest iteration of the multiplayer yet with an impressive 12 stages to do battle on. The AI opponents can now be configured to have ten different difficulty levels – level one AI is prone to making mistakes and is fairly passive, whereas level ten opponents will come at you with zero hesitation and dodge most of your bombs with ease. Each arena this time around is even more diverse than in Bomberman ‘93, offering both environmental hazards and unique setups that dramatically affect your approach. The Duel Zone stage starts all four players out in the middle and has them racing to break free to the outskirts of the arena where tons of power-ups lie. The Power Zone starts everyone off with a full arsenal of power-ups, and the Speed Zone makes everyone move at maximum speed. Light Zone’s gimmick has most of the stage shrouded in darkness except for two spotlights that move around, making this stage the most nerve-wracking of the bunch.

The only port Super Bomberman has ever received was on Bomberman Collection Vol. 2, a PC compilation of the first three Super Bomberman titles and Bomberman Party Edition that was released exclusively in Japan in 2004. This collection remains one of the white whales of Bomberman game preservation to this day, with no available ways to download it and no auctions or sales of it occurring in recent years either. Evidence of its existence is only available on the internet in the form of some box screenshots and videos of Japanese players who have a copy of the game. Going by the available footage and how the first collection was handled, it appears to be a straight port with no significant additions. There was also a Super Bomberman released for J2ME capable devices in 2003, but it’s an entirely original title and not a port.