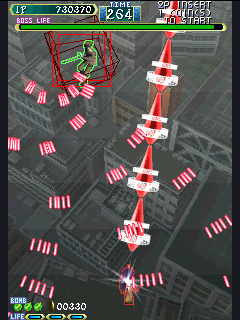 Alfa Systems is far from a household name as far as Japanese game developers go, at least in North America and Europe. Outside of a few PC Engine shooters like Download and Psychic Storm, some RPGs like Linda Cube, and lightgun shooters like Elemental Gearbolt and Project Horned Owl, they’ve mostly been known for developing games for larger companies, like the TG-16 CD versions of Ys Book I & II for Hudson, and the Tales of the World series for Namco, amongst many others. However, they gained some small level of fame with their Shikigami no Shiro (Castle Shikigami) series, a trilogy of overhead bullet hell shooters. For the most part, Castle Shikigami is their flagship series. It has two sequels, has appeared on almost every console from the PS2 to the Dreamcast to the Gamecube to the PS2 to the Wii to the Xbox 360, and a massive cast reaching into the dozens, with a convoluted plot that even their staff are unlikely to fully comprehend. Not that this really matters, as Castle Shikigami is a shmup, and nonsensical plots are practically the norm for the genre.

Similar to Cave’s ESP Ra.De. and Espgaluda, you control humans who can fly through the skies. The landscapes are all 3D, but the ships and enemies are made of a combination of sprites and polygons. They’re not exactly visually impressive and they lack the gorgeous spritework of Cave’s games, but they have their own unique feel to them.

Each Castle of Shikigami game contains a number of playable characters, each with drastically different powers and weaponry. Each player also has their own story mode, where the hero and bosses exchange taunts before fighting. The different playing methods lend a lot of Shikigami appeal, because not only do they have plotlines and endings, but each has their own distinct scoring strategies. The game requires that you play through the game as a single character, forbidding you from switching after dying.

There are two main types of attacks: 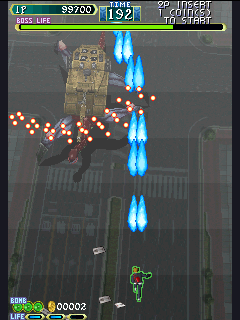 The normal pattern fire. Enemies release coins freely, which have to be gathered by the player. These attacks double in intensity if the player grazes enemy fire, meaning their shots are immediately next to the player’s hitbox, similar to “buzzing” from Skonec’s Psyvariar. This is called the Tension Bullet System, or “TBS”. The hitbox is usually the very center of the character sprite, and they can not die unless it is struck, making it possible to weave through insane amounts of oncoming shots. However, rather than this being the focus of the gameplay, like Psyvariar, it’s something you can take advantage of to win boss battles quicker and reach for higher scores. It’s a brilliant risk-reward system, even though it involves squinting at the screen to figure out exactly where your characters hitboxes are. 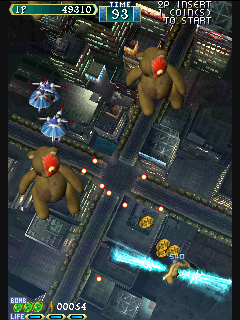 Uses spiritual power to attack. Many of these have a short range or some other limitation, but the coins earned from killing enemies go automatically to the player. This is usually done by holding down the fire button, as there are alternate buttons which can be held down for continuous fire. 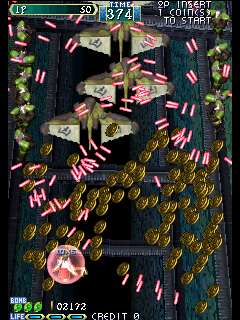 The closer the player is to enemy fire, the more coins they gain. If a player kills an enemy with a Shikigami attack while grazing, they’ll gain up to eight times the resulting amount of coins. For scoring, it’s best to use this against bosses. 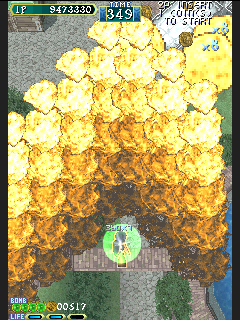 These are typical of bullet hell shooters. Some do high power destruction, some do more focused damage, but all briefly protect the player from enemy fire. The player gets anywhere from three to five.

The first Shikigami game takes place in the July 2005, the “near future”. A number of victims have been found murdered, all of them female, seemingly electrocuted. After the 32nd killing, the attention of the Tokyo Metropolitan Police Department is finally gained. They begin an investigation, as do a number of persons drawn by the case’s strong ties to the occult. What’s always set Shikigami apart are the variety of playable characters. The first game offered six to choose from. The players arrive to stop the killers, while the bosses are either the killers themselves, or ghostly figures serving them.

If the player can stay alive long enough, the standard attack gets stronger with higher scores, at a maximum of Level 4. This is exclusive to the first game. Each stage in the first Shikigami game has two sections. After the first are two mini-bosses, each regarded as a section (2-2, 2-3) and at the end is the main boss. Before the beginning of each stage and during the boss fight, the characters either have a monologue or a dialogue, depending if they’re alone or not. Everyone’s dialogue is different. This game has no voice acting during the story segments, but there are various yells and shouts used in-game.

After its initial arcade release, Shikigami no Shiro was ported to the PlayStation 2 and Xbox. Taito published the PlayStation 2 version, as well as distributing the arcade version. The Xbox version, published by Media Quest, is dubbed Shikigami no Shiro Evolution and was released in two separate versions. The Red version included an art gallery while the Blue version contained developer interviews. There’s also a new Evolution mode which revises some of the game elements. There are also Windows versions of all three Shikigami games. The original release includes an anime intro not in any version. The EX version lacks this intro but adds a few small upgrades.

In 2003, small budget publisher XS Games licensed two Japanese shooters for American release – Gunbird for the PlayStation and Shikigami no Shiro for the PlayStation 2. They dubbed the games Mobile Light Force and Mobile Light Force 2, respectively. Adding insult to injury, it used the same cover as Mobile Light Force on the PlayStation, showing a trio of girls with guns that has nothing to do with the actual game. (The European version is just as bad, showing robots that also don’t have anything to do with the actual game.) Gunbird had all of the cinemas and bonus material hacked out, plus some of the characters names were changed to staff members of XS Games. This game had all the dialogue or story segments cut out, and any sign of there being unique characters outside of the sprites and select screen portraits were removed. All of the Japanese voices redubbed with indecipherable speech which appears to be English. Furthermore, the Shikigami attacks were renamed “Mobile Light Force 2” attacks in the manual. Both also had their tate options removed. Still, they were both released dirt cheap ($10 for Mobile Light Force, $15 for Mobile Light Force 2), so even though they were butchered, they were still decent buys for starved shooter fans.

Kohtaro is a detective with the Metropolitan Police, assigned to the case. His special attack uses a spiritual familiar named Zasae who accompanies him everywhere, whether he likes it or not.

A Shinto shrine maiden with designs on Kohtaro. Sayo appears to be investigating the murders at the request of another. She attacks with spiritual wards.

A werewolf/detective, who assumes the form of an ancient wolf god when enraged. He’s something of a cheapskate, investigating the murders on his free time.

A half-German half-Japanese witch. The rise of the Nazi Empire forced her family’s movement to Japan, where she’s resided ever since. Fumiko is also quite wealthy, and is usually accompanied by her butler, Munchausen. Munchausen’s aerial bombings are the form of her special attack. He usually has a different costume with each appearance.

A Confucian Taoist from Korea who also teaches Tae Kwon Do to children in his spare time. One of his students was murdered by the killers, forcing his hand. His guitar case conceals a sword, which is used in his special attack.

A child actor murdered by the Yakuza, she became a homicidal ogre hell-bent on revenge.

A self-defense officer who attempted to summon a God to Tokyo. This specter values the defense of his country above all else, fighting with a sea of flame.

A man whose wife’s murderer got away with a seven year sentence. This drove Hiroshi into a blind rage, and he killed the criminal upon his release. Soon after, he became an ogre unsatisfied with merely the blood of his wife’s killer.

A ghostly Samurai of Justice who continues to perform homicides without remorse.

An arachnid woman responsible for the killings, who takes the form of a gigantic spider, and then a ghastly spirit. Interesting note: the final boss’ last form can’t be hit. All the player can do is survive until it fades away.