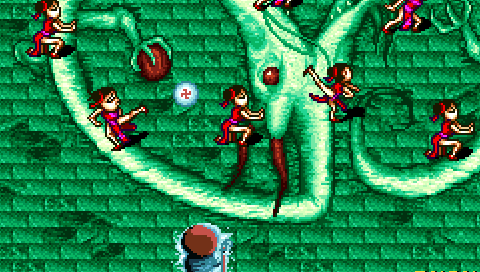 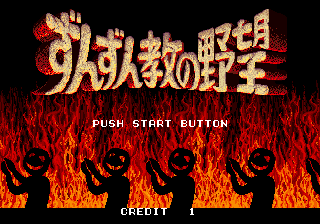 There are some games which exist that are incredibly “Japanese.” Being that many games in the eighties and nineties were made by Japanese developers after Western companies dropped the ball in 1983, Japan stepped up to make games their own way. Some Japanese titles were creative in a way that also held mass appeal, like Super Mario Bros. (mushrooms, big pipes, and evil turtles? Okay!) and Street Fighter II (electric green beast vs. stretchy yoga man? Awesome!), but then there are those which don’t really translate well outside of their country of origin. Games that draw heavily from Japanese culture, mythology, and/or social norms don’t tend to get translated for overseas releases. Take Konami’s Goemon games, which actually did get a few releases under the name “Legend of the Mystical Ninja.” However, those were only four games in a series that spanned more than twenty titles, with most of the games not having been released due to each installment’s heavy use of Japanese cultural objects and traditions that would have been nigh-impossible to sell to anybody not familiar with them. Such is the case with Zunzunkyou no Yabou, also known as “Ambitions of ZunZun.” It’s as culturally Japanese a game as one can get, even though the over-the-top style is draped over simplistic gameplay. 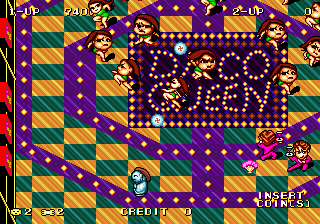 The entire premise of the game revolves around defeating four bosses, whom you get to pick the order you fight them in Mega Man fashion. Your player character is named ZunZun and is a statue of Jizo, also known as the bodhisattva Ksitgarbha, a popular figure in Buddhism known as an envoy between realms of death and life. Jizo statues can be seen in other video games, with a particularly famed example coming from Super Mario Bros. 3 where Tanooki Mario transforms into a Jizo-like statue to become invincible. Your stony avatar fights against a… very colorful cadre of opponents for purposes unknown, perhaps just that he’s the manifest of good sworn to extinguish evil in whatever form it appears. Whatever you pick to start, you fight through three normal levels before taking on the boss, and after beating all four bosses, you then go to two more stages before challenging the final boss. Each level consists of the same basic goal: Kill a certain quantity of enemies ranging from forty to fifty opponents. However, the opponents in question are of… decidedly unorthodox design. 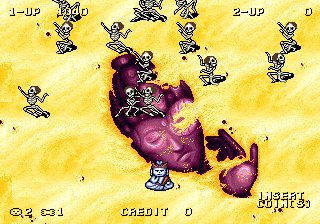 ZnY is basically Parodius meets Space Invaders (a premise also done by Taito themselves with Space Invaders ’95: Attack of the Lunar Loonies), except you control a statue instead of a spaceship and you fight within an enclosed arena instead of vertical space. It would be more akin to an arena shooter like Robotron: 2084, except your statue can only shoot straight upward. The stages themselves all seem to be themed around different parts of the world: The kabuki boss on the far-left represents Japan, the chef represents China and mainland Asia, the crusader knight stands for Europe, and the superhero on the far-right stands for America. Yet even outside of the Japanese stages, there’s a distinctly goofy flair about the game that emphasizes screwy cultural stereotypes from a Japanese game company. The game’s actual developer, Minato Giken, also helped work on the Game Gear version of Dynamite Headdy, one of the most fantastically insane Genesis platformers ever, and that same sort of unhinged design can also be seen in ZnY. You fight talk show hosts, salarymen, pandas, matadors, clowns, rock stars, and other outlandish opponents detailed in exaggeratedly comical fashions. The graphic design is definitely Zunzunkyou no Yabou‘s strong suit, with its colorful characters and quite detailed playfields making high use of Sega’s System C-2 hardware, the same processor behind Puyo Puyo. 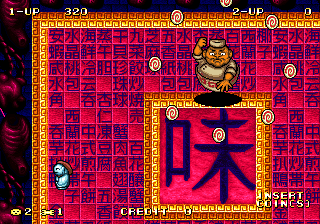 That’s not to say the game itself isn’t competent, even if how it plays is rather simplistic. As mentioned above, you need to terminate forty to fifty enemies, though there are more than this on any given stage. Each level has two varieties of baddies: Main enemies and sub enemies. Main enemies need to be hit twice before they can be terminated, with the first hit subtly (or not-so-subtly) altering their appearance. Sub enemies aren’t usually necessary to kill and they only take one hit, but they are a lot more agile than main enemies and tend to get in your face more often. After destroying all main enemies, you need to end the level by killing four sub enemies, and you do this for three consecutive stages before reaching the boss. To help you in your quest for purification, you get two bombs which cause the screen to freak out as a bunch of Buddha statues bombard everything. You can pick up more bombs from floating icons, as well as other power-ups that do things like increase your speed and make your shot more powerful, which also alters your physical appearance into various other deities from Asian mythology. Powered-up states carry over into boss fights, provided you don’t die before reaching them. All of the boss fights are pretty tough if not as silly as the rest of the game; perhaps the doofiest of them all is the far-right boss, a parody of American superheroes who flies about with ridiculous body motions and spits out swirls and a seven-way spread shot with the letters in “JUSTICE.” 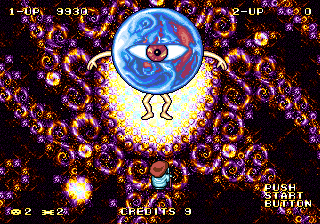 The final fight is against an evil version of Earth with a giant ominous eye in its center who skedaddles erratically around while spitting out smaller Earths at you. It’s a heck of a heinous fight, and unfortunately, beating the world doesn’t really get you an ending. You just immediately plop back to the boss selection screen with the four baddies all restored. Everything’s the same except the difficulty’s a bit higher now, and if you want to see the actual ending, you need to beat the game all over again. It’s not as painful to do so as in Ghosts ‘n Goblins, but it is still a definite cop-out to artificially prolong potential gameplay. You’ll be feeding the machine a lot of quarters while beating it a second time, as Zunzunkyou no Yabou is very unforgiving to the point of almost being cheap. Enemies’ patterns become vexing in later stages and their projectiles more numerous, and it may just get to the point where spamming bombs after continuing is really the only reliable strategy. It could thus be argued than Zunzunkyou no Yabou is very much style-over-substance, with its cracked-up appearance being its primary selling point. It doesn’t win too many points for its sound design, with most of the music being unmemorable and a rather obnoxious (and uncharacteristically retro-sounding) failure tune blaring out whenever you die. Still, it is definitely worth playing just to see all of the madcap enemies and stages, and it’s still a fun-if-not-frustrating shooter at its base. It was deemed too weird to make it outside of Japan (and perhaps even too weird for consoles hence), but Zunzunkyou no Yabou is worth firing up on an emulator and letting the lunacy blitz your eyeballs. 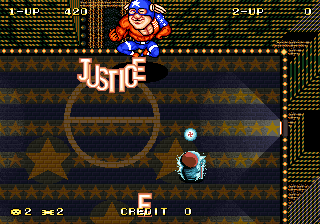