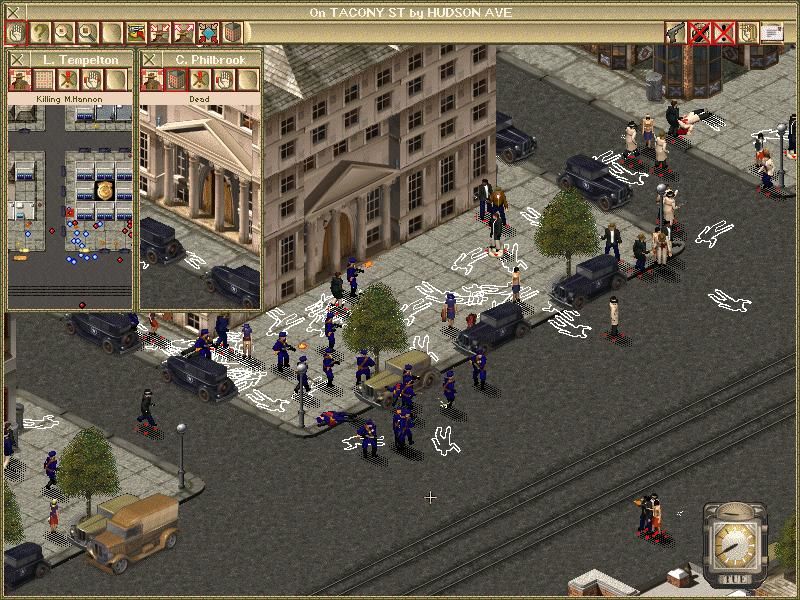 It is the 1920’s, and prohibition is in full swing, leaving the American people thirsty for dance, dames, and drink. You and your crew have just arrived in New Temperance, virgin territory that is begging like a farmer’s daughter for some bad boy to come and take it. This is your chance to shine, to make a name for yourself in the underworld… assuming the three rival gangs don’t beat you to the punch.

Gangsters: Organized Crime doesn’t get the praise or recognition it deserves, probably because on its initial release it was mistaken for something else. The screenshots strongly suggest an action-oriented RTS, like Starcraft but with fedoras, Tommy guns, and Dillinger-era coupes. The fact that it was made for Windows 95, which is notoriously unfriendly to modern PCs, didn’t help its legacy, either. In a nutshell, Gangsters is “SimCapone”, a gangland simulator as deep and palatable as a barrel of bootleg rum.

You manage a criminal empire not unlike those of the gangland legends of the Roaring Twenties. You can start a generic full-length game or choose from a number of pre-made scenarios with different city layouts and starting conditions. There are three ways to win, and each method is harder than the last. The easiest victory comes when you “go straight”: if you have enough capital, enough legal businesses, and no illegal rackets, you can become a successful, law-abiding businessman. You can also run for mayor, but that’s considerably more difficult, since it requires that the city actually likes you; and even if you’re more popular than Gotti, running for office paints a big target on your back for the remaining gangs to take potshots at (more so than usual, anyway).

The most difficult and rewarding victory condition is also the simplest: wipe out the other gangs. Raid and destroy their businesses to draw the police’s attention to their activities. Torch their illegal operations and laugh as they try to explain to the cops why they had a numbers racket set up behind their real estate office. And if Elliott Ness is taking too long to lock them up for good, outfit your whole crew with Tommy guns, march into the leaders’ offices, and give ’em an offer they can’t refuse (the success of this method tends to be a roll of the dice, so it might be better to considerably reduce their manpower first). Going in guns blazing from the start is bad business, however. Starting the game with rivals who are out for your blood can make progression grind to a halt, and the more obvious your crimes, the more you stand out like a wolf in a hen house. Knowing how to exercise discretion is the key to victory — after all, nobody profits from a gang war, and the cops are annoying enough when you aren’t pissing them off every week.

The game is divided into two gameplay modes: the Planning Phase and the Working Week. During the Planning Phase, each gang boss issues orders to his crew and decides how to spend his ill-gotten wealth. This phase is riddled with menus that help you manage your criminal empire. Form teams of hoods under your lieutenants and equip them with guns and vehicles, then issue their orders for extortion, business, kidnappings, and killings. Alter your diplomacy settings with your rivals (anywhere from alliance to all-out war) and pay snitches to identify the newest members of their gangs (unidentified rival hoods are bad news). Check the headlines to see if the cops are on to you, or if your rivals are getting too big for their zoot suits. Check your overall ranking on the charts, to see which gang has the most influence, the most suspicion, the most money, or perhaps most importantly, the loyalest members. The ever-present map highlights the location of each weekly order for your convenience, and also has its own assortment of filters and icons for highlighting your territory, any info you have on rival gangs, which neighborhoods hate you the most, and recent events such as shootings, robberies, and bombings. And of course you can save your progress, load a previous game, or start a new city altogether if the current one isn’t working out for you. Hey, nobody said you couldn’t skip town and set up shop in LA or New York.

Once all your orders have been given, you can start the Working Week and watch your minions carry them out in real-time. The real action takes place during this phase, and you can give your men (and women) basic orders such as tailing, assaulting, or killing any rival gang members you can find. A large assortment of (mostly) customizable windows helps you to efficiently keep track of everything that’s going on. You can even speed up or stop time to make urgent decisions if things go wrong. At the end of the Working Week, you return to the Planning Phase to review that week’s reports…which are hopefully nothing but good news. Some consider the Working Week a downside to an otherwise great strategy sim, because you either have to sit through the whole sequence and watch events play out, or disable all alerts and fast-forward, potentially missing the chance to chase rivals out of your territory before they find your office or bomb your buildings. Even if it seems boring initially, there’s always something to keep you entertained: listening to your gangsters extort frightened shop owners, or watching your rivals gun each other down in the streets.

Few crime bosses like to dirty their hands with killings, bribes, and extortion. That’s what hoods are for! These guys make up your work force, and in some ways each one is a virtual pet — maybe not to the extent of the citizens of Tropico (another great strategy-sim), but they still need to feel appreciated and kept busy. Hood stats are complex and tricky to get the hang of. The most important is Intelligence, since this is what makes a bomber successfully rig his device without blowing himself up, or keeps a gunman from mindlessly opening fire on rival hoods (or worse, the police). But even a smart hood can botch a kidnapping by accidentally blowing the target’s head off with his low Firearms rating, so it’s best to only hire hoods with lots of four- and five-star stats in addition to Intelligence. Never promote a hood to lieutenant if he or she doesn’t have high Intelligence and Organization, since the latter determines how well they distribute your orders and equipment: a disorganized lieutenant will always send the wrong man for the job, give him the wrong equipment, and poorly estimate how much time he has to do the job. The lieutenant’s other high stats will decide his team’s function in the gang. The guy with five stars in Intimidation should be in charge of your extortion team – his amazing Intimidation stat will improve that of his underlings.

Hoods do all sorts of things for you. They extort businesses, collect weekly protection money, and have a variety of ways to silence anyone who won’t pay up. They recruit accountants, lawyers, and more hoods at the appropriate locations (banks, law firms, and pool halls respectively), or hire specific people from the list of names on your clipboard (if they’re interested in working for you). They buy legal businesses, set up your illegal ones, and run both. They can trash or set fire to undesirable buildings. They can tail, beat up, intimidate, kidnap, or kill practically anyone in the city. They can also go to jail, desert you and tell others about your organization, piss off your rivals, turn a simple job into a bloodbath, and bring a war with the cops straight to your doorstep if they’re stupid or ill-utilized.

The accountant gives detailed weekly reports on how much you spend, how much you earn, and how much you’ve paid to the government in taxes. You can have the accountant evade taxes to save a few thousand bucks per week (this can draw unwanted attention from the Feds), and send him to audit businesses of hoods you suspect are skimming off the top.

The lawyer is an invaluable asset. He keeps your hoods out of jail by bribing officials: for example, if your hoods are arrested, he can bribe the DA for a list of jurors, each of whom can then be bribed, intimidated, or killed. He can recruit police officers on your payroll, or go straight to the top and purchase leniency from the chief of police or mayor. He also keeps you up-to-date on legal proceedings against your hoods, and business owners who are informing on you to the police.

One of the major failings of Gangsters is that it is as secretive about its mechanics as Capone was about his business. One could quite literally spend pages and pages describing the game’s nuances because there are so many things that can happen in just a few in-game weeks. A game this complex and nuanced needs a detailed, easy-to-follow tutorial on how everything works. The in-game help is probably one of the most useless you’ll ever encounter, providing such insightful tips as, “The Knives stat indicates how good a hoodlum is with Knives. If their Knives stat is low, they aren’t very good with knives.” Fortunately the game comes with a manual that actually explains things in detail, though sometimes even this isn’t informative enough.

Another flaw is the fact that, much like with computer errors, you’re left to deduce for yourself why some orders fail during the week. You send a squad to smash up the store of an obstinate citizen who refused to pay protection; the following week, you send them out again to take another stab at extorting him, only to watch helplessly as the squad aborts the mission seemingly for no reason. Checking the target business yourself, you discover that it is closed for repairs, on account of your smashing it up the previous week. Since the business is closed, it can’t be extorted until next week, but it would have been nice if the hoods had included that detail in their failure report. That’s not including the occasional glitches: hoods getting stuck on lamp posts, or locked in “wait” mode and unable to leave it (seems to happen if you tell them to wait while time is paused), and the rare game crash.

There was also a spin-off/expansion of the original called Gangsters: A Piece of the Action, but it doesn’t seem to exist on the internet. It was either the demo disc for the full version of Gangsters, or an expansion that focused on the multiplayer experience, because there wasn’t much for single-player content.

In spite of its flaws, Gangsters: Organized Crime has so much going for it, it can take an entire novel to describe the events of a single game. It has depth and complexity that provides an addictive and fulfilling experience for any RTS or simulator fan, especially those with a fondness of hardboiled movies – the vintage-looking FMV intro, done in the style of an old PSA from the golden age of matinee, is a real treat to watch. And there’s always the more action-oriented sequel if gunning people down in the streets is more your thing.

In recent years it has been added to GOG.com’s compendium of classic software, jury-rigged to work on modern computers – a feat in itself for any Win 95 title. Grab it, print off the manual, and get yourself a piece of the action.