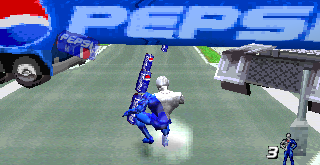 Pepsico tends to have a chip on its shoulder. As #2 in the cola wars, they strove to beat its major competitor with more eye-catching advertisements and slogans, many coming off more as extreme and bizarre marketing. In the late ’90s, their ad blitz was tantamount with zany commercials with dancing bears and assorted celebrities or Coca-Cola stockers thirsty for the real flavor. Japan was no different, but their spin on took its own venture with the creation of Pepsiman, a hero for taste. Most of the commercials starring the logo-emblazoned, faceless CGI man had him running toward those in need of Pepsi (nearly all filming went on in the US with English voices) and granting them their wish with his hand outstetched and his previously-unseen mouth open as he breathes out a “shaaa”, like the effervescent fizz of soda – and most of the time promptly injuring himself in some slapstick folly. His design was so simple and cool that he got recognition and fame beyond just Japan. 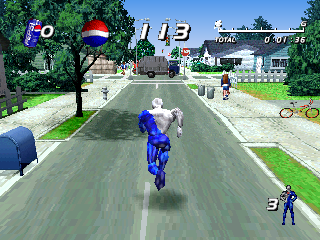 Naturally, this silvery mascot was a perfect fit for an action game. Beforehand, he had made a cameo as a guest fighter in the Japanese Saturn release of Fighting Vipers, but eventually Pepsiman would receive his own game, donning his new half-blue suit to match the then-current can design. 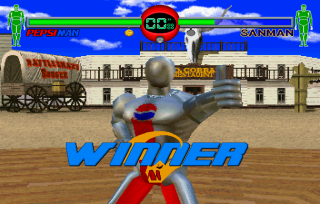 Pepsiman the game is a form of a high-stakes take on the general premise of the commercials. Someone of authority tells Pepsiman about a crisis far off, people stranded or in peril and needing their thirst quenched with caffeinated refreshment. Thus, you’re constantly on them move through roadways, alleyways, and any other sort of narrow passages, cutting through slices of Americana. Pepsiman is a licensed endless runner game, one that predates the craze of cheap 2D runners that flood the mobile market today. There’s dozens upon dozens of obstacles that lie between Pepsiman and the fulfillment of his duty to bring liquid happiness, so the klutzy silver mascot stumbles and pratfalls like he does in the ads.

Pepsiman is simple enough that the controls could fit on an NES controller. One button is set to jump while the other is for sliding under obstacles. The slide button serves multiple purposes, as holding up + slide makes Pepsiman sprint for a short burst, for extra speed or to break through simple barriers, while down + slide allows him to slow to a brief skid. 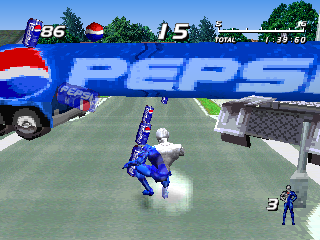 Each section has 100 cans of Pepsi strewn around to guide you and tantalize you off the beaten path. Collecting them adds to your score, and for 25 cans you get an extra life. Collecting enough cans also refreshes Pepsiman himself and replenishes his health symbol – otherwise he can only take 3 hits before he collapses. Loss of a life also comes from falling into a hole, being hit by a strong enough obstacle like a huge wall, rock or train, or letting the timer run out before you reach your destination. (No doubt Pepsiman dies out of grief that he was unable to bring refreshment in a timely manner.)

The game is rather short – there are only four stages in total, each divided into two main scenes, with an added pulse-pounding chase capping each one. Starting in a suburban neighborhood, Pepsiman takes to the streets, downtown, construction zones, subways, sewers, the Southwestern desert, and finally to Pepsi City to take care of Pepsi’s factory and mainframe computer. Halfway through most scenes, Pepsiman runs headlong into a building to emerge with some item that changes up the gameplay, such as a trashcan on his noggin causing left and right controls to reverse, or a barrel or board to ride on. 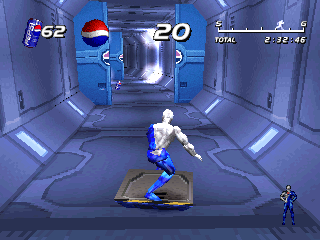 At the end of each first scene, our hero stops at a vending machine to enjoy his own pitched product before moving on to the next venue. After bringing Pepsi to the cheering troubled folk at the end of the second scene, Pepsiman must run toward the screen and dodge oncoming hazards while some large rolling threat nips at his heels (twice it is a giant can of Pepsi). There is no save feature, but that’s not necessary for such a short game. Those looking for a long refreshing title should see this disc as a 12oz can rather than a 2 liter’s worth. As it stands, the game serves as a quick challenge to chug through for half an hour.

Being a swift arcadey experience, Pepsiman takes a quarter from the coin-munching machines and ramps the difficulty up fierce. After an initial training stage, it gets down-and-dirty with setting up traps and pop-up trip-ups aplenty for the rest of the way. I-beams swing and bounce, signs rain from above, oncoming trucks and holes grow legion and bring instant death. 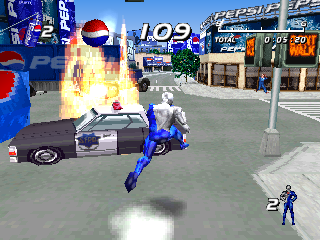 The timer leaves little chances to mess up, either. You might end up pulling your hair out after retrying desert stage for the nth time well before you get to tackle the maddening, crate-hauling conveyor belt factory finale. Rote memorization and nimble thumbs become paramount in later scenes. Even then, a mistimed sprint can muck up the timing of moving threats like 18-wheelers, and one wrong bump knocks our hero right into a hole in the ground for extra insult. Checkpoints become godsends, even though they are easily missable, and losing all your lives kicks you back to main screen, only able to continue at the start of the most recent stage.

That’s not to say that the game doesn’t have its charm. Much like the commercials, there’s plenty of amusing flourish and altogether silliness that only Japan could produce. Seeing Pepsiman bonk his head or fall flat on his face and cringe brings out a chuckle every time (at least during the first half) and the shameless plastering of billboards hocking the brand reaches ludicrous degree. Many of the set-pieces are humorous, not just running from a giant can or Pepsi, but crashing through people’s houses, dodging exploding police cars, or accidentally running into a billboard with a road painted on it, Wily E. Coyote-style. Even people on the sides of the road will hold up signs with the words “Give me Pepsi!” scrawled on them. 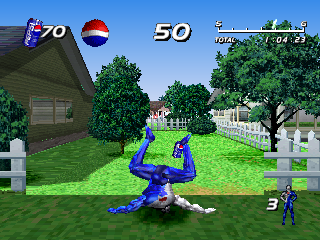 The graphics have aged, but they also have their own appeal with blocky, pixellated cars and 2D cutouts of civilians or construction men to barge through or dodge. Every stage is orchestrated with a short remix of the Pepsiman theme song on Redbook format for your own CD player audio pleasure.

After release, the game was an import-fave for collectors of weird Japanese games. It made for an easy international experience thanks to English menus and dialog (with Japanese subtitles). That also goes for the intermittent FMV cutscenes that star actor Mike Butters sitting in his house in an ill-fitting Maui T-shirt and enjoying Pepsi (and Pepsi-owned Lay’s Potato chips. And pizza, most likely Pepsi-owned Pizza Hut.) and generally being a spokesperson for the brand. These scenes serve no purpose, but add to the strangeness of it all. 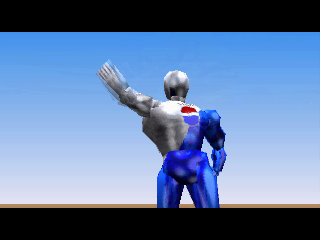 Before the glut of endless runners, Pepsiman served as an unique, dumb-but-fun wacky treat. Even today it still serves as a neat advergame diversion, though a bit of a costly one compared to the free/ad-ladden ilk of the current market. It’s short and shallow, but a neat game for a quick session every once in a while.