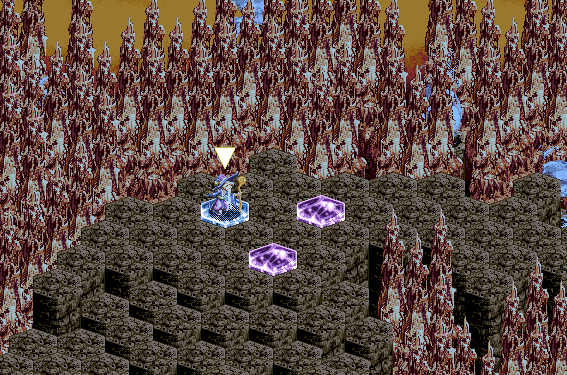 Falcom is typically known for fast paced action RPGs like Xanadu, Sorcerian, and Ys. However, they’ve ventured out into different territories, like real time strategy with Lord Monarch, traditional JRPGs with Legend of Heroes, and, of course, tactical strategy with Vantage Master. Most Japanese strategy games find their routes in either Nintendo’s Fire Emblem, or Quest’s Tactics Ogre, but Vantage Master is a class all its own. 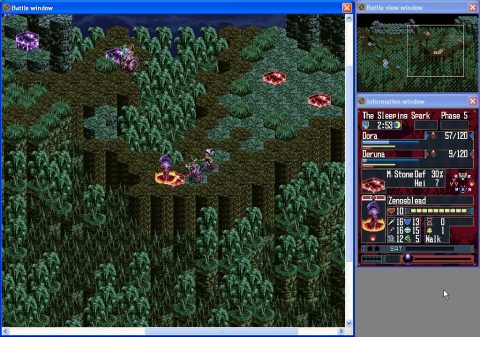 Vantage Master is a huge step apart from typical Japanese tactics games, mostly because it’s meant specifically for one-on-one player, a concept more often seen in Western real time strategy games. There are whole scenarios for single player modes, too, but even those are one-on-one battles against a computer opponent.

The concept is loosely similar to Magic the Gathering, in that you summon a group of monsters to protect yourself, and defeat your opponent. In contrast to the card game, your main character is a unit on the playing field and can directly attack opposing units, but they’re generally pretty weak in comparison to your monsters. It’s also not advisable, considering their death means the end of the match. Each character, monster or otherwise, has a maximum number of ten hit points. There are over twenty different character classes, each with different characteristics. Many of them are characters from other Falcom games, including Adol and Feena/Reah from Ys, Mail and Gau from Popful Mail, Chris and Jurio from Legend of Heroes: Prophecy of the Moonlight Witch, and Ares, Dora and Clare from Brandish. 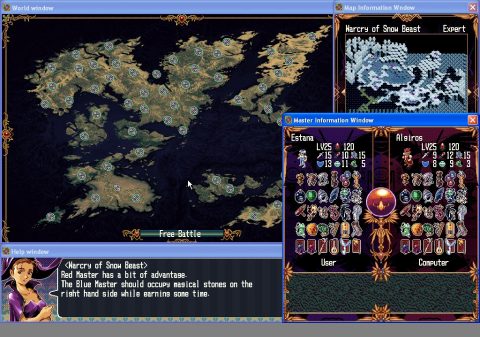 The source of all your monsters is your character’s MP pool. Each monster takes a certain amount of MP to summon, and drains a set amount of MP per turn. Monsters do not have their own MP, so instead they draw from yours when casting magic spells. You regain MP every turn, although that amount depends on the number of crystals you’ve captured on the map. Obviously, it’s a viable strategy to capture – and guard – as many crystals as possible, to drain your opponent’s MP while increasing your own. Standing on these crystals also regenerates one HP per turn, as well as granting a defense bonus.

There are 24 different Natiels in the game, each varying in offensive, defensive and movement capabilities, and some possessing unique skills. Different character classes control a different variety of monsters. Like most strategy RPGs, each monster is aligned with one of four elements: Earth, Fire, Water, and Heaven. Each has the usual strengths and weaknesses: Earth beats Water, Water beats Fire, Fire beats Heaven, and Heaven beats Earth. No matter your class, you’re always given at least one of each elemental when you begin the game, so it’s never quite unbalanced. In the Scenario mode, you’re only given a few Natiels, but more are granted as you progress. They also gain levels as they fight, here called SAT or “SATisfaction”, for whatever reason. 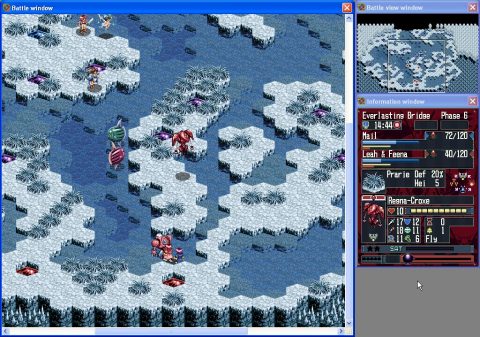 Additionally, time passes while on the battlefield, and certain monsters are stronger or weaker at different times of the day. All of the tiles are also hexagonal, compared to the usual square tiles, and hitting from behind or the sides will do more damage than hitting from the front. Also, keep in mind that not all of the maps are symmetrically divided – in many levels, one of the players may have a very distinct advantage by possessing more crystals. An onscreen tutor – here, a friendly Witch – will guide you as you select your levels, as well as giving useful tips about Natiel types and terrain. Keeping all of these factors in mind are vital to victory, or otherwise you’ll be dealing a single hit point of damage with each attack and end up getting slaughtered.

And that is probably Vantage Master‘s biggest issue – the AI is absolutely relentless. Even in the early stages, they’ll completely trounce you, so expect to spend a few rounds learning the basics before you expect to get anywhere. This is one of the reasons why it’s so much better played with another player, who’s actually liable to make mistakes. 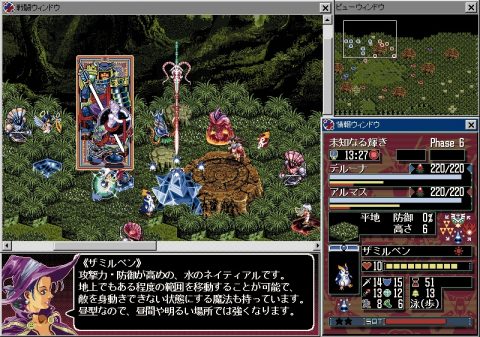 Compared to a lot of Japanese strategy games, it’s remarkably freeform. There’s not much in the way of story – instead, the main Scenario mode just consists of groupings of maps to be conquered, before you move on to the next bracket. The Expert Mode gives you all of the summons at the beginning, but puts you in maps where you’re usually at a disadvantage. In these modes, you don’t directly choose your character, but instead you’re given a short quiz to determine who best fits your personality. More interesting is the Free Mode, allowing you to fully customize most players, their available Natiels and magic spells, and even individual statistics. You can play on any map and even choose time limits, if you don’t want matches to go on for too long.

Vantage Master was one of Falcom’s first titles natively developed for Windows, finally moving away from the obsolete PC98 hardware. It uses the native Windows interface, which means you’re free to move or resize any of the game windows, but it’s actually all a bit sterile and ugly. The second release, Vantage Master V2, is fundamentally the same, but has a completely new set of maps, an easy difficulty setting (which is still quite difficult), and rebalances some of the characters. It also adds multiplayer capabilities through modem or networks. 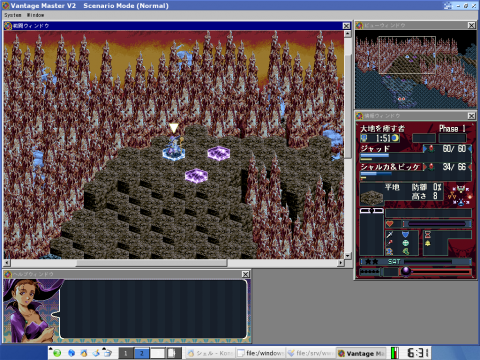 Falcom translated the game for English speaking audiences and released it on the Internet for free in 2002 under the name Vantage Master Online, which was definitely a kind gesture on their part. Obviously the translation is pretty Engrishy, but when it’s free, can you really complain? The original game was sold on CD, so it has redbook audio tracks – naturally, if you downloaded it online, you’ll have to live with MIDI music. Still, you can always download the music and then set them to play in game.