Ever had one of those days? The kind where nothing goes right and it feels like the world’s out to get you? The Tanamatsuri family is in the middle of a collective quagmire of bad luck. Bank heist, turmoil at work, bug attacks, marital affairs, store sales, bad photo op, aliens, near-death experiences, giant teddy bears, off-key karaoke, and worse yet, they might miss Grandma’s birthday! It’s a race against time to make it back home in time and in one piece, never mind the possibility of saving the city from total destruction. Stress can kill about as bad as bullets or explosions, and you don’t want to blow your top in a tense situation. As Britian’s Ministry of Information stated: “Keep Calm and Carry On”. 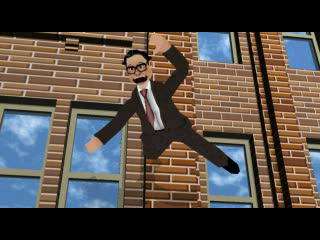 Incredible Crisis is a very Japanese game, in the same league as Katamari Damacy as the sort of loony, offbeat foreign title gamers flock to and/or laugh alongside, generally attributing the creation being done under the influence of drugs. The story has no qualms trying all the threads in a very bizarre manner, getting the ball literally rolling with a statue’s globe falling off its planned placement by accident before dominoing into an alien invasion. In startling contrast, the Tanamatsuris are as stereotypical of a Japanese family the culture can surmise. The father Taneo is a everyday salaryman, his wife Etsuko is the Japanese housewife that never takes off her apron, Tsuyoshi is the plucky youngest son looking straight out of a Gamera film with his bowl-cut and tiny shorts, Ririka is the fashion conscious cell phone yapping older daughter, Hatsu is the sweet elderly granny turning 80, and Pesu is their dog. Such one dimensional everymen and women serve to further emphasize how out-there their monumental adventures play out. The game itself is composed with an original score by Tokyo Ska Paradise Orchestra, highlighting the farce of the events in a plucky manner. To many, the main theme is the most memorable part of Incredible Crisis. That and Taneo’s high-pitched goofy scream. 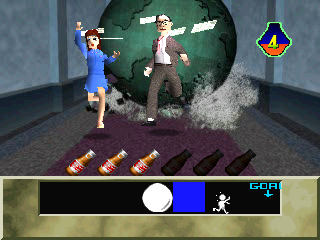 The game is a set of minigames dolled out amongst the 4 main members of the family. Each focus on their side of the story with many plot points only fleshed out and explained within another’s scenario. Taneo must flee his workplace after the globe chases him, only to be hospitalized, meet up with a seductress, and survive a runaway subway ride after manning a battleships’ artillery. Etsuko must deal with Wolfmask robbers, steal a golden piggybank, then ride a snowboard and a fighter jet in order to make her way home in time to cook sukiyaki. Tsyoshi gets miniaturized Honey, I Shrunk the Kids-style and must escape towering insect menaces, and finally Ririka skips class to hit up sales and sing karaoke while befriending a baby UFO. All this tied together with a seductive co-worker in a red dress, an unlucky old man with a leaky boat, and a teddy bear with a bad photo on it that get hit with a growth ray. Every far-fetched curveball to the plot serve merely as another crazy obstacle that must be hurdled in order to make it home in time. Everything from firing missiles at targets to dancing games to twitch dodging courses to even math quizzes are put into play, keeping things relatively varied in the short game time.

Many of the minigames themselves parody famous movie moments or have MAD-style puns of action movie titles. Obviously Taneo being chased by a large boulder mirrors Raiders of the Lost Ark‘s beginning scene, but so does Etsuko’s tense situation of having to weigh her groceries in order to match the idol-like golden piggybank before a spiked ceiling closes in. Ririka has to communicate with the alien mothership like in Close Encounters of the Third Kind, only in a game of Simon – complete with matching PlayStation colored buttons on the underside of the hull. Minigame titles range from spoofy names like IB4: Independence Bay or Titanic Away. Much of everything else is a pastiche of cinematic themes ranging from Buster Keaton perils to espionage action to monster movies. It’s a comedy of errors as everything goes haywire in a Rude Goldberg spectacle. 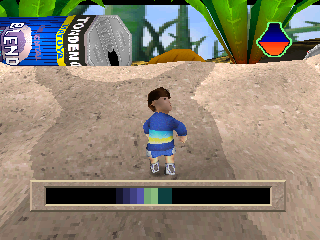 Sadly the yucks wear thin and grow into tedium halfway through the game. Too many of the same types of minigames get repeated with the offspring’s chapters (that annoyingly lengthy emptying the old man’s leaky boat gets used 3 times throughout the story) and they merely make things more frustrating to accomplish. The sliding sand in the antlion’s pit level can keep Tsuyoshi from making his already slow walking progress an excruciatingly long climb compared to much of the games’ fast pace. Too many segments focus more on luck or mad button mashing to succeed, especially when one false move can make you lose control. The wackiness turns bland during the second half as the tales of Tsuyoshi and Ririka aren’t as grand or madcap and the trials their parents face. Even the novelty of the game itself fades fast, leaving you little reason to play it again outside of showing off the best moments to friends. It’s a shame that all the FMV elements can only be viewed once during the story mode, as you’ll have to slog through every single minigame just to relive a later game moment or even watch the ending again (unless you keep multiple saves onhand). The ending itself shows the outcome of all the main characters and what becomes of the rolling globe, setting up a “To Be Continued” sequel hook that will probably never see a release. Fortunately, Incredible Crisis was brought out at a budget price throughout most of the world, so the fact that it’s a short and strange ride a bit more palatable to intrigued consumers. For many, it was a oddball rental to experience with a few beers and a party crowd passing the controller around. 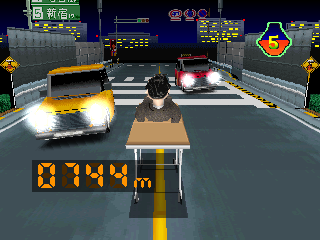 It’s quite a surprise that an insane oft-kilter unknown property got picked up and translated for Western countries, almost all in one piece no less. There are two minigames that were axed outside of Japan due to complications in localization. The first has Taneo diffusing a bomb on a subway train using instructions that fly by from bystanders holding up cards, and was removed due to the difficulty of translating the single kanji phrases into Roman lettering. The second cut stage is a rhythm-based karaoke booth performance with Ririka and her friends, removed possibly due to Titus not wishing to redub the song and Ririka’s terrible singing. The story proceeds with the FMVs leading to and from these segments regardless.

An arcade version was released in Japan by Tecmo, truncating to only the “best-of” with each family member, having no story whatsoever nor logic to each minigame’s progression. The more lengthy or complicated games are nixed to focus on the more actiony bits. There is an added card match bonus challenge to earn more lives between levels. The visuals look slightly crisper than its PlayStation counterpart too. 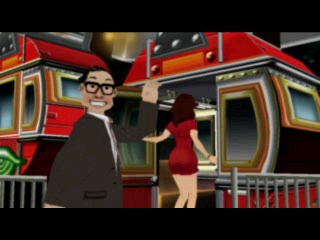 Incredible Crisis was an appetizer for many of the kind of out-there Japanese mentality in a pre-WarioWare market. It’s that sort of risk-taking and silliness that adds spice to an increasingly serious Hollywood blockbuster drive the business has taken in recent years. Sometimes, it’s best to take a breather and laugh at the face of danger once in a while. It’s a wild day, just one you don’t want to relive too often.