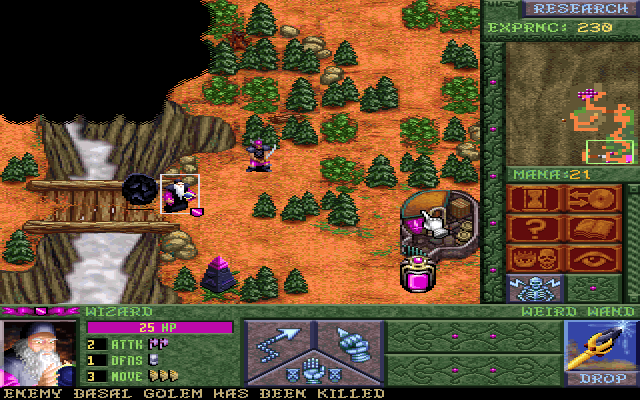 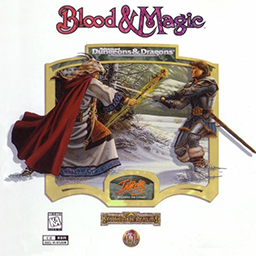 1996 was a rich year for PC real-time strategy games. The seminal Warcraft: Orcs and Humans had been released in 1994, refining the groundwork that Westwood Studios had laid in Dune II. Among the many Warcraft and Command & Conquer competitors that came out during the resulting boom was Tachyon Studios’ fantasy RTS, Blood & Magic.

The title is something of a misnomer, since the game is almost bloodless. It is, however, full of magic. In fact, almost all the units in the game are enchanted golems created by Bloodforges, mystical artifacts of immense power… that are nevertheless fairly common and so unremarkable that they’re never mentioned in the single-player scenarios themselves, only in the instruction book.

Although nominally set in the Forgotten Realms setting for Dungeons & Dragons, the rights-holders seem to have pre-emptively disowned the game by placing it in a distant new region of that world called “the Utter East.” Several Forgotten Realms gods are name-dropped in the instructions, and that’s about the extent of their connection.

Blood & Magic centers around units called basal golems, which you can summon from your immovable Blood Stone, a single pulsating square of energy that serves as your home base. When stationary, basal golems take the form of an obelisk and slowly accumulate mana, up to a maxium of ten mana per obelisk, which can be harvested by right-clicking or control-clicking on them. Mana is your only resource. It can be used to create new basal golems at your Blood Stone, to transform them into more powerful creatures at other buildings that can be created around the map, and to fund the use of some creatures’ abilities.

Players will immediately notice two major flaws with this system. First, individually gathering mana from basal golems is very tedious. Second, the player begins each map with only a couple basal golems, but there’s no practical limit to the number you can have. Thus, on each map, the player must laborously create an arbitrarily large force of basal golems, which produce mana to summon more basal golems, a cycle that only ends when the player gets fed up with it. (Basal golems will eventually release their mana to you automatically, partially addressing problem A. However, this takes much longer than harvesting from them mantually, so if you want to make use of it, you’ll need to make even MORE golems.)

The AI never abuses this exponential ramping system, which is a mixed blessing – on the one hand, the player isn’t forced to engage in a frustrating basal golem-harvesting cold war, but on the other hand, the computer will never be able to match the mana resources that even a mildly patient player can bring to bear. On most maps, the player is really only in danger early on, when the enemy forces far outpace them in both quantity and quality. Even then, the AI isn’t particuarly aggressive, so you can usually hole up and get your footing easily enough.

On the bright side, the combat system is admirably straightforward and clear-cut. Each unit has an attack rating, a defense rating, and an amount of HP. When a unit attacks, it deals damage to its opponent equal to its attack minus the opponents’ defense, to a minimum of one. Since all units attack at the same rate, it’s easy for a player to estimate the outcome of a fight. Modifiers to these stats from items and terrain are clearly visible – it’s a very friendly UI in that respect.

Units also have a wide variety of special abilities to keep things interesting. Gnomes can hop over buildings, and many units fly, avoiding obstacles but also missing out on defense bonuses from terrain. Paladins receive a defense bonus against undead units; Wraiths cannot be hurt by most attacks. Some creatures have activatable abilities that expend your mana, like the Cleric’s healing, the Wyrm’s hazard-creating flame breath, and the Nymph’s “Lure” that forces living units to follow her like sheep. Unfortunately, you have to research the more interesting units using “experience points” from kills and victories, so you’ll generally be stuck using the same basic units at the beginning of each campaign. There are generally a few neutral units scattered around the map to keep things more interesting, but they’re rarely a significant factor in the gameplay. 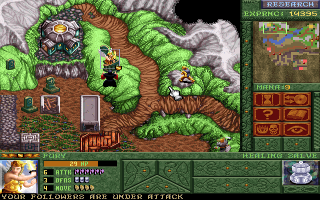 The system heavily rewards “micro”: moving your units around in fiddly little ways. Positioning your units on specific squares of terrain is often important, as is using healing items at the most advantageous time. You can kite slow Zombies with speedy Rangers, or unsummon your units just before they die for extra mana. Some levels allow even more satisfying shenanigans, like using switches to drop enemy units down bottomless pits, or letting you capture them and throw them in a boiling cookpot for extra mana. The micro isn’t all fun, though – your units’ pathing AI is mediocre, and you’ll have to practically hold their hands to get them through some of the narrower or more hazardous levels. Also, the game just moves slowly in general. It takes forever for two units of equal power to slog it out, and the speed that most units move across the map is best described as “meandering.”

If there’s one area the game stands out in, it’s aesthetics. The unit sprites are beautifully animated and full of character. Wizards impatiently juggle magic balls when inactive, while gnomes flop around like frogs. When they die, wyrms burn up from their edges like tissue paper. Some levels contain long stretches of featureless terrain, but others, like the Valley of Earth, can look quite lush and beautiful. (And since the “Fog of War” that limits your vision does not return once you’ve seen an area, you’ll soon have a good view of the whole map.)

The music shows admirable variety, and effectively captures the mood of the different maps. The stacatto and dischordant Puzzle Palace, swelling and receding Realm of Tides, and progressively more ominious Vanesci Hamlet are particularly memorable. There are also a fair number of straightforwardly bombastic themes, such as Realm of Fire and Kingdom of Nix, which are competent but ultimately unremarkable. 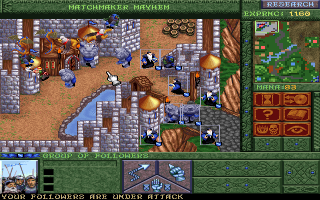 The game supports two-player multiplayer over modem or LAN, but most players are going to experience only the single-player content. The main game centers around five “stories” of three maps each, with tones ranging from high fantasy to fairy-tale. The plots are earnestly explained between each level, using still pictures and somewhat stilted, semi-rhyming narration. Each scenario has a red side and a blue side, the choice of which affects the progression of the story, which buildings and units you’re given access to for free, the order of the levels, and your positioning and objectives within them. For example, the second scenario, “Matchmaker Mayhem,” allows you to play either as a princess who defeats a series of would-be husbands to secure her right to be single, or as a particularly determined suitor (just in case you wanted to play out “The Taming of the Shrew” in an RTS). The levels have a reasonable amount of variety, and the last scenario even throws a few new units into the mix. Unfortunately, you can’t pick the most interesting-looking scenarios from the start: you must complete the scenarios in order of difficulty.

Once you complete the stories, you unlock the “Random Campaign” mode, where you can create your own wizard and set out to conquer the Utter East away from a variety of other jerks with Bloodforges, one level at a time. (Oddly, although you can choose your starting location, the game decides where you move on the map after that.) There’s no real plot, though each individual map provides a perfunctory attempt at a framing story. There’s an alignment system that calculates your morality and ethics based on semi-arbitrary in-game actions, but it doesn’t affect anything and is safely ignored.

This mode has a few things going for it. First, it’s kind of fun to customize your own wizard. Especially appreciated are the new army colors (magenta and gold are a relief after 15 levels of red and blue), and the inclusion of “unknown” as a gender choice. Second, this campaign introduces a couple of new magic items that are extremely fun to use: a book that teleports the unit holding it, and a wand that fills a chosen space with a completely impassable barrier (which looks like a twirling, grumpy emoticon stamped on a metal cracker).

On the downside, you just played through these same fifteen levels, and now the game is demanding that you do so again with minimal changes. It gets pretty old. If you find it within yourself to slog through all of them again, you can challenge the final level of the game, which appears at first glance to be simply tedious and unfair. If you roll up your sleeves and tackle it, however, it reveals itself to be profoundly tedious and unfair, throwing waves of extremely tough, regenerating super-enemies at you and hobbling your ability to upgrade units. Beat that level, and the game gives you a perfunctory, one-sentence congratulation and boots you back to the title menu.

Overall, Blood & Magic is a flawed game, but polished in appearance and enjoyable for what it is. Players who enjoy slower-paced RTSes and micromanaging their units should give it a look. Just don’t feel compelled to grind your way through the whole thing.

Some copies of the US release were packaged with a black Dragonmaster die for TSR’s collectible Dragon Dice game, which they were pushing at the time.

A demo was released in 1997, both online and on the four-CD Forgotten Realms Archive collection. It features two levels lifted directly from the full game’s campaigns, with all features intact. It also has a unique 3D-animated opening sequence, featuring wizards actually duking it out with shape-shifting magical golems, which is completely absent from the full game.

BLOOD & MAGIC and the FORGOTTEN REALMS

The game left little mark on the Forgotten Realms. Outside of this game, the Utter East appeared in several pieces of fiction realized in 1998, most prominently the serialized novel series The Double Diamond Triangle Saga. That story reveals that the use of Bloodforges poisons the land and people surrounding it, slowly transforms its user into a horrifying mutant, and attracts murderous extraplanar demons… so go ahead and start feeling guilty for using them so freely in the game. Enough fans retained enthusiasm for the region that the Utter East got a brief mention in 2007’s The Grand History of the Realms, but it has not been seen or heard from since.