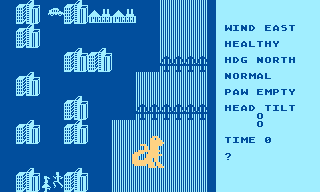 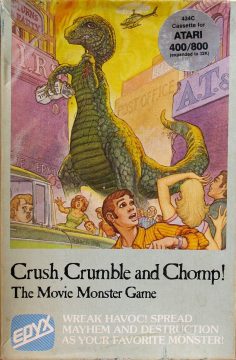 And now for something completely different! Crush, Crumble and Chomp: The Movie Monster Game puts you in the shoes of one of six gargantuan monstrosities, to crush, crumble and chomp everything that moves and then some. Obliterate skyscrapers with your sheer weight, breathe fire upon the infantry as it marches out to stop you, grab the fleeing mobs and eat them alive! CC&C is the most awesome game of destruction ever – in theory. The actual representations demand a lot of imagination from the player, as not too much of all this is actually recognizable on screen.

The game takes “inspiration” from many of the monster movie classics (which means it steals their monsters) to give each monster its unique appearance and powers. Goshilla is of course the bipedal lizard, Arachnis catches victims in its spiderwebs. The Glob’s slime is highly inflammable, which destroys everything in its trail, but also blocks the way back for the monster itself. Kraken can only move in water, while Mantra as a Pterodactyle-like creature takes off into the air. Mechismo, finally, is a little too similar to the AT-AT walkers from Star Wars. The cities are also taken from typical movie locations: New York, San Francisco (referred to as “Golden Gate”), Washington D.C. and Tokyo are clearly recognizable on the maps, but in close up don’t actually look that much different from each other. 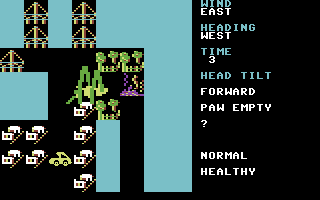 The fun of CC&C comes from all the monster’s crazy abilities: Doing a strafing run with Mantra by tilting your head to the side and setting each building you pass on fire, lashing about with your tail as Goshilla and zapping laser blasts with Mechismo brings memories of all those classics to life, although mostly in your mind. All monsters get hungry with varying speed, except for Mechismo, of course, who doesn’t need to bother with capturing humans to feed upon them. The game also allows to grow new monsters, based on 8 different carcasses (in addition to the featured monsters a brontosaur and a giant snake), and a selection of abilities (limited by a fixed amount of skill points).

There are five different goals to select from, like killing as much civilians as possible or destroying the whole city, but it is almost impossible to win for the monster, as stronger units of military are dispatched the more damage you cause, and a mad scientist is out to kill the mosnster from his helicopter with paralyzing poison, too. When it finally succumbs to its hunters or starves, you’ll be shown your final score, which once again represents the actual “goal” of the game – scoring better than your friends.

A single monster has no sex life. (How could it?) However, if you are interested in scoring, you may find out your current score any time during play by pressing #.
– Jon Freeman, Crush, Crumble & Chomp manual

CC&C‘s big problem stems from its use of the antiquated DunjonQuest engine. Since now a lot of characters can be on screen at a time, the wait for turns is nerve-wrackingly long, and the way commands are input don’t encourage patience at all. For example, the last input of a turn isn’t executed before the beginning of the next, after all enemy units’ moves are completed. It could have been such an awesome game, but its pace is hardly bearable anymore for a modern gamer’s ADD-deranged mind. 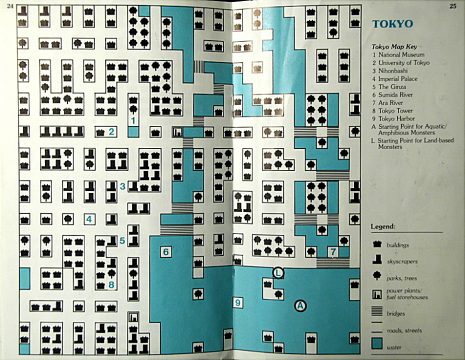 Most of Automated Simulations’ games before they officially became Epyx started on the TRS-80, and CC&C was no exception. The graphics are nice compared to previous games, but still very barebones. The Apple II game looks much more natural and is the only version that displays the head tilt, except for the IBM version, which is obviously based off that one, though not without a few graphical improvements. Head tilt is important for breath attacks and the like, with a portrait of the monster’s head. On Atari computers, the feedback for the controls feels most intuitive, but it is also rather ugly, especially lacking in colors. The VIC-20 version actually looks pretty decent, despite having the biggest frame for the on-screen display and thus the smallest playing field. For some reason it is the only version that lacks custom monster creation. Unsurprisingly, the game is the most beautiful on C64, with huge monsters that are actually displayed according to the direction they’re looking at (the monsters in the other only had one single side-view sprite, mirrored for two of the directions at best). It has the most aggravating input, however, not only with weird effect timing but also sometimes unreliable.

In 1986, Epyx remade CC&C, now just titled The Movie Monster Game. This time the company purchased the official licensing rights to use Godzilla, but otherwise stole its monsters just as impudently as the older game, if not more so. It even ripped off the Marshmallow Man from Ghostbusters, AKA Mr Meringue and Transformer’s Megatron, oh-so-cunningly disguised as Mechatron. New cities are Moscow, Paris and London, complete with their distinct landmarks to crumble, but smaller in scope. The game runs in real time, with input done directly with the joystick, but the monsters still retain an array of special abilities, selectable with the space key. Overall it lacks the depth of its antecedent, but feels a bit more playable, since you don’t have to wait forever till it’s your turn. The game was received rather well, although not exactly effusively. Jon Freeman, however, called it “a terrible game,” as Epyx failed to “adjust the scale” of the gameplay to the monsters’ size, rendering some scenarios pointless. 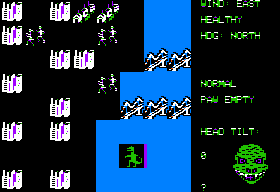 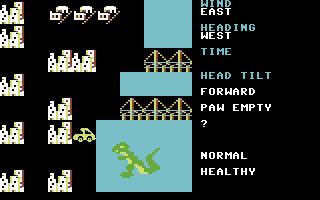 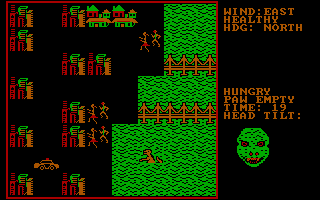 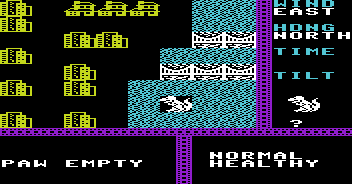 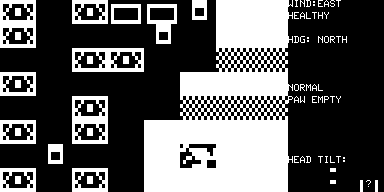