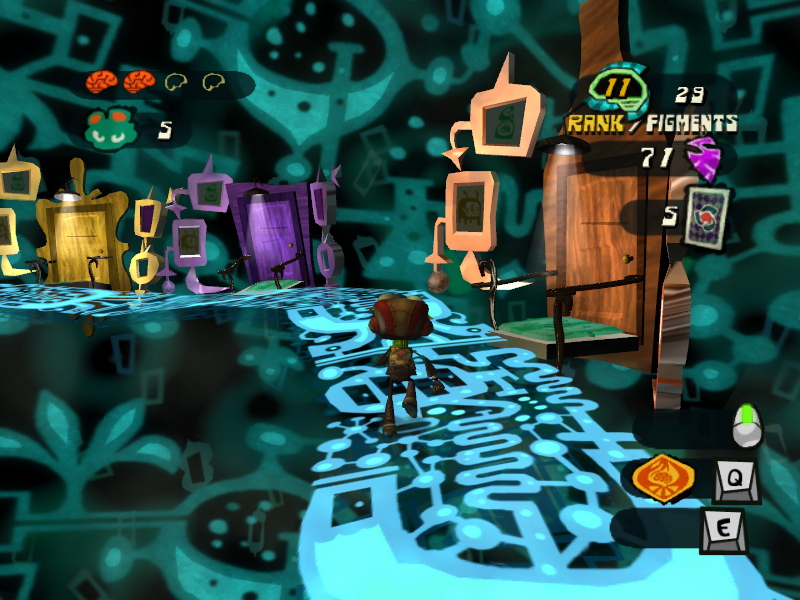 In the ’80s, there was this company named Lucasfilm Entertainment that started making games. And they were good. Gamers were happy.

In the next decade, things kind of went downhill. LucasArts started to concentrate almost solely on Star Wars games, and the adventure game genre dried up. Tim left the company formerly known as Lucasfilm Games. He started Double Fine, his own company. And he made Psychonauts. 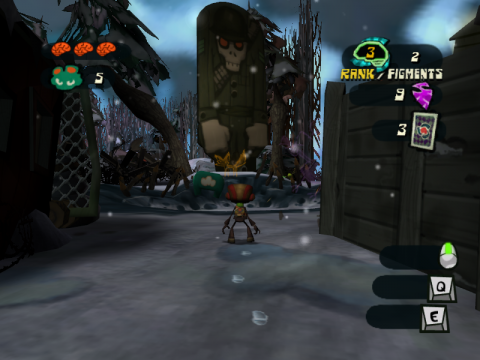 Unlike Tim Schafer’s other games, which were made primarily for the PC, Psychonauts is directly aimed at the console audience, and ditches the point & click genre in favor of 3D platforming. It plays much like any other 3D platformer – you run, you jump, you whack enemies with your giant psychic hand or stomp on top of bad guys. There’s a lot of collectables and hidden nooks and crannies to explore. As far as gameplay goes, Psychonauts is pretty typical. But it’s a game that relies more on the experience.

Psychonauts is about a young boy named Raz, who has psychic powers. He’s managed to escape from the circus where he’s grown up, and infiltrates Whispering Rock Summer Camp, a gathering of children who are taught how to harness their strange mental abilities. Throughout the game, Raz will gain a number of powers, including telekinesis (to pick up objects and through them), Pyrokinesis (to burn stuff), Levitation (sounds pretty obvious, but involves balancing on a gymnastics ball made out of psychic power), and Clairvoyance (to see through other character’s eyes.) Most (if not all) of these powers will be needed at some point in the game. Crazy brain powers are nothing new to the world of video gaming – see Second Sight or Psy-Ops – but those were primarily serious action games, whereas Psychonauts fits closer along the lines of lighthearted platform games like Mario. 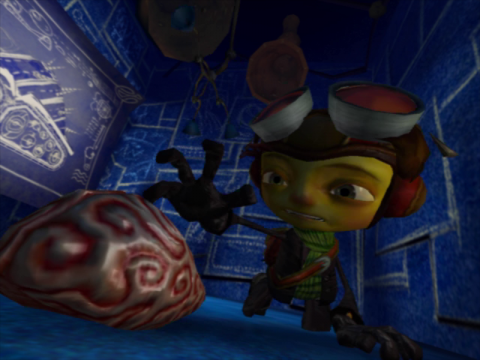 While you’ll be wandering around the campground for a fair amount of the game, the actual stages of he games lie in the mental world. In order to progress, you’ll be sent into the minds of several different characters. Each level is a representation of their psyche, complete with repressed memories and (literal) emotional baggage. In bringing these worlds to life, Psychonauts is filled with some of the most incredibly creative levels ever seen in a 3D game. The variety of unique characters is what makes Psychonaut even more engaging – each one of them has their own interesting personality. While you can speak to them directly, the most amusement comes from hearing them talk to each other – or to themselves. The cast is huge, so here are only the more important characters from the first few acts of the game: 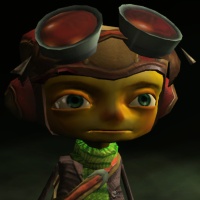 This is you. Since your parents weren’t nice enough to send you to Whispering Rock, you decided to sneak in by yourself. Your goal is to become a full-fledged Psychonaut before your parents come and take you home. Raz’s mind is a dark, haunted wasteland that houses a mysterious caravan, full of memories he doesn’t want to remember. There’s also random pieces of meat lying around your head, for some reason. 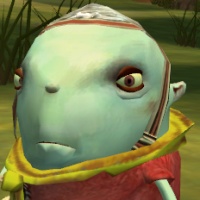 There are many other kids at the camp, but Dogen is Raz’ closest friend among them. Not exactly a strong-willed kid, Dogen is constantly being tormented by both human and animal alike (even the squirrels seem to get a kick out of saying mean things to him, as he would attest). He’s really, really dumb, but he’s kind-hearted, and Raz takes to protecting him. 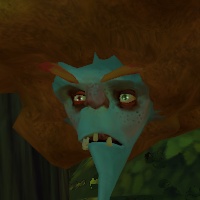 The resident bully (because every summer camp has to have at least one jerk, even those that are special training facilities for psychics). Bobby Zilch takes whatever opportunity possible to make everybody’s life a living hell. His distinguishing mark is his gigantic orange afro. 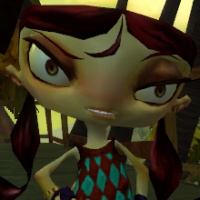 Lili’s been coming to Whispering Rock for a few years now, and she’s already passed every test. She’s convinced that absolutely nothing happens there anymore (at least, until Raz shows up). Naturally, she becomes a bit attracted to him, and Raz is constantly teased about her being his “girlfriend”. She also gets abducted, unsurprisingly. 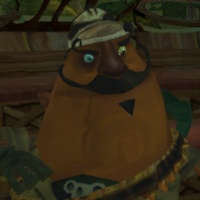 The R. Lee Ermey-esque Basic Braining instructor. He thinks he’s in charge of the place, ordering people around and calling them names. Really, though, his bark is worse than his bite – even though he turns out to be a bit of an evil guy. His mind is a “Basic Braining” course, which is some distorted rendition of a war film. Explosions, falling airplanes, bushes made from chains of bullets… and film projectors displaying the face of Oleander himself, as he “motivates” you with some of his insults (“You’re like molasses going uphill in January… with crutches!”). 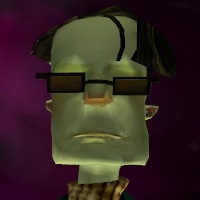 A world famous super-agent, though he’s too busy to realize that. He thinks that anything supernatural can be explained with scientific proof – and his lab is cluttered with file folders. The lab also serves as the venue for experiments with the “Brain Tumbler” which allows you to enter your own mind, as well as the Shooting Range. Sasha means business all of the time, so his mind is merely a black and white cube, representative of his repressed nature. It’s here where you meant the censors, little bald, bespecaled men in suits that run around and try to stamp out foreign bodies. Sasha eventually leaves on “official Psychonauts business” – which is when things start getting fishy. 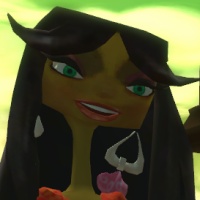 The resident party girl, and the master of Levitation. She teaches you how to float, which makes jumping a heck of a lot easier in some instances. Milla’s mind is a gigantic disco dance club, filled with psychadelic lights and funky music. There’s also a skateboard halfpipe (and eventually a small racetrack that is sure to remind at least one person of the special stages from Sonic 2). She, too, leaves on official business, putting Oleander in charge. 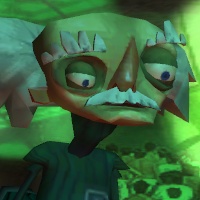 This old geezer can be found pretty much everywhere on the camp grounds. He serves as a park ranger, a store clerk, a cook, and a janitor (among several others). But in reality he’s the wise mentor of the resident Psychonauts, overseeing their actions from an inner sanctum located deep underground, which he (and you) can access through a hidden railcar system. Ford gives you a slice of bacon that you can use to get in contact with him wherever you are (he pops out of one of your ears and starts talking to you). 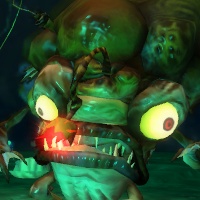 The Lungfish is a huge, disgusting monster that likes in the lake, but she’s actually pretty nice – at least after you free it from some evil mind control. Inside the Lungfish’s mind is the City of Lungfishopolis. A giant hulking Razputin (nicknamed “Goggalor” by the residents) gets to smash apart the city, avoiding tanks and biplanes in a scene inspired by Godzilla films and the classic Midway arcade game Rampage. You’re much bigger than usual, with severe effects on the environment – by jumping you leave small craters in the ground, the screen shakes as you run, and there are tons of little tiny lungfish that are running away from you (and get crushed into a bloody pulp if you walk on them). 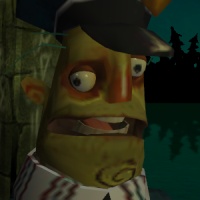 The security guard at the asylum. He’s completely paranoid, suspecting absolutely everyone of government conspiracy, and making constant references to “The Milkman.” His mind is a simple suburban neighborhood, except the streets are twisted in impossible directions, there are hidden cameras everywhere, and suspicious agents in trenchcoats watch your every move, making bizarre proclamations of their actions (“These are my hedge trimmers. They help me maintain my hedge.”) The level requires searching for tools, like an old Lucas Arts adventure game. Uncovering the Milkman (“I am the Milkman, my milk is delicious.”) is one of the most hilarious moments in a game. 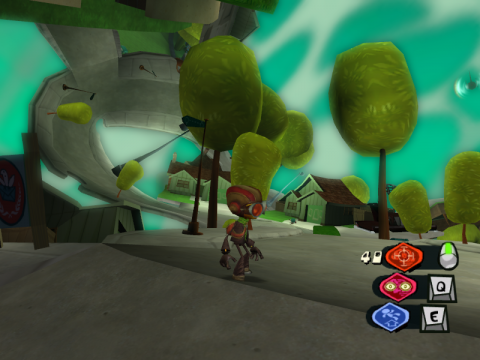 Psychonauts‘ graphical style is certainly a unique one – those who have seen the works of Jhonen Vasquez (Invader Zim, Squee, Johnny the Homicidal Maniac) will certainly see the influence. The characters all have bizarre proportions – large heads, even larger afros, bodies like sticks, and extremely distorted faces that look like something out of The Nightmare Before Christmas. The environments also have that certain element of cartoon realism – you can tell what everything is, but it won’t necessarily look normal.

Since so much of Psychonauts‘ charm relies upon its characters, it’s fitting that Double Fine hired some of the best voice talent in the business. Some of the actors include names like Richard Horvitz, Charles Adler, and David Kaye, all of which have been in at least one Nickelodeon cartoon at some point. Even the dullest lines of dialogue are made hilarious by the skilled acting. Combined with the musical talents of Peter McConnell, the game is truly something to listen to. 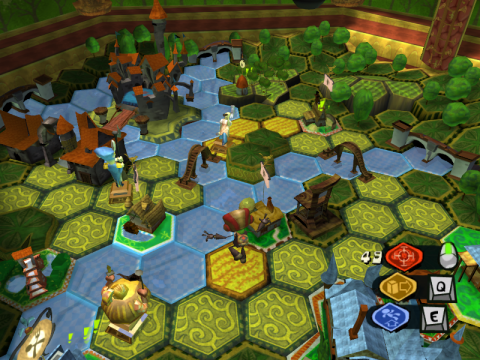 Still, as wacky, funny and endearing as Psychonauts is, it’s not without it’s flaws. The console versions only run at 30 FPS, with the PlayStation 2 version suffering even more framerate issues than the Xbox one. As a result, the controls don’t feel quite as smooth as other platformers. (The PC version is capable of running much smoother on the right hardware, and nowadays it’s the most easily available variant anyway, available on both GOG.com and Steam.) The game can get quite buggy too, as it’s possible to get caught in scenery or end up in a glitched area, although it’s easy to escape any of these situations by using one of the transportation items. There’s a lock-on which aids the use of your psychic powers, but it’s pretty shifty and hard to control. It’s also somewhat difficult to figure out where a jump is going to land in a few rare cases (especially when the world is rotating beneath you, like in the Milkman Conspiracy level), but otherwise, the camera is pretty good, and does doesn’t have any major faults, unlike a lot of other 3D platform games.

Collectibles can also cause some annoyance. Although the game is pretty linear, there are tons of things to pick up and find. Certain psychic powers are mandatory, but can only be obtained by finding enough trinkets. It’s pretty annoying when you come across a roadblock, only to find out you need to run back to find some more arrowheads or psi cards so you can progress. These subquests are rarely long or difficult, but they disrupt the flow of the game. The collectathon also feels like its artificially padding the game, which isn’t terrible long to begin with. 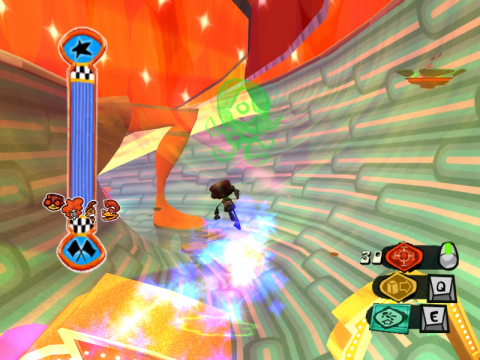 Despite these few hiccups, Psychonauts is still an extravagant game – even though the gameplay rarely offers anything innovative, it has some of the most creative characters and worlds of any game out there. But such bizarre designs just don’t have a huge market appeal. The tragedy is that Psychonauts just didn’t sell very well. The game had a somewhat unfortunate publishing history behind it. Initially, it was set to be an Xbox console exclusive, to be published by Microsoft. This is when they wanted to put out some really innovative titles. Unfortunately, at some point, they changed their minds, and dumped Psychonauts (as well as a few other unique Xbox games like Oddworld: Stranger’s Wrath and Phantom Dust). Majesco ended up picking up the publishing rights, but the game was met with an indifferent reception. Perhaps it was because the game was barely marketed. perhaps it was because the console audience has no idea who the hell Tim Schafer is, or how awesome all of his previous games were. Perhaps it was because it was initially released on the Xbox, a system that isn’t exactly well known for it’s platformers, but even the PS2 version was ignored – maybe a GameCube port would’ve served it better.