Nearly 10 years after the release of OutRunners, Sega released OutRun 2, a marvel of a game. OutRun 2 looks and sounds so good, yet in spite of the vastly upgraded graphics it’s unbelievable how close to its roots it feels. The Sega Chihiro board is the new platform, and it includes a 733MHz Intel Pentium III and nVidia graphics processor, approximately the same as the Xbox, which in turn makes for an excellent home conversion. Sega offered three different cabinets for OutRun 2, the “Twin“ cabinet being the most popular for linked racing. But the real surprise is Ferrari finally licensing their brand to Sega, so in this version there are eight classic sports cars from the Italian manufacturer, which all look fantastic and drive like a dream. 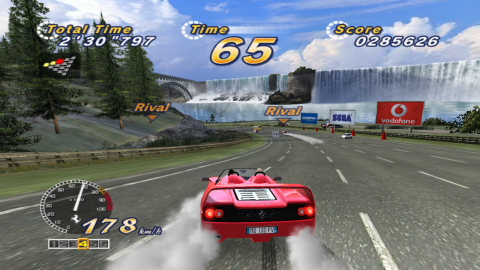 The biggest addition is the new drift technique. While at a high speed, by turning the wheel and tapping the brake, you’ll activate a drift, which allows you to take rough corners with ease. Mastering this ability is the key to getting the best times, and it’s a lot of fun to pull off.

Included are three single-player modes. “OutRun Mode“ is the standard arcade mode, as you race through five out of 15 possible stages. “Heart Attack Mode“ lets you show off your driving skills to the lady in the front seat by performing different tricks and tasks, while “Time Attack Mode“ is self explanatory. There’s also a linked “Multiplayer Mode“ for linked cabinets like in OutRunners. 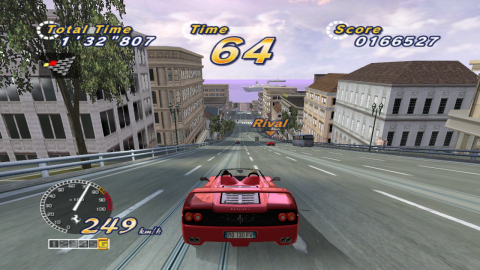 Breathtaking stages, a silky smooth 3D engine, and the stars of the game: the shiny, expensive Ferraris. Each of the real-world locations look stunning, as you drive past the Eiffel Tower at night, speed along the pyramids of Egypt, blaze through the flower gardens of Holland, and along the classic beachfront just like the original title. It’s also the only game to make a rundown industrial complex look gorgeous. The five different goofy endings make an appearance too, depending on which course you take, just like old times. There are three different girls to sit next to you, depending on which mode you’re playing.

In the audio department, the three classic OutRun tunes return, again remixed, plus four new songs – “Risky Ride”, “Shiny World”, “Night Flight” and “Life Was a Bore” – that are actually pretty good. The cool radio announcer and roaring of the crowd from OutRunners is now gone. Sega added plenty of fan service too: the horizon and sideline details morph when you change levels, and the voice that yells out “Checkpoint!“ sounds nearly identical. 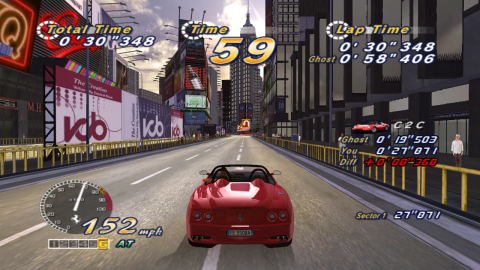 Sega put United Kingdom-based company Sumo Digital in charge of porting the game to the Xbox, and they did a spectacular job. They also added plenty of hidden cars and stages, most notably some from other Sega racing games like Daytona USA 2 and SCUD Race. This is a nice bonus since these games have never been ported. The Japanese version has better looking, more accurate versions of these tracks. There’s an expansive mission mode that puts you through various parts of each level and has you attempting to fulfill certain goals like in the Heart Attack mode. Plus plenty of additional new tunes, notably some nice remixes courtesy of Richard Jacques (known for his work on Sonic 3D Blast and Jet Grind Radio), online head-to-head for up to eight players through Xbox Live, and finally, the 1986 original arcade gem to unlock.

In 2004, Sega released a new version called OutRun SP. However, calling it a mere “upgrade“ isn’t doing the game any justice. This new entry includes 15 totally new stages, tweaked physics, and more tunes, which is way more than your average upgrade. In the new levels you’ll drive across the Golden Gate bridge, through gigantic sequoia trees, past an arctic oil refinery, see the Moai heads of Easter Island, zoom through a Las Vegas-style city, and under a starry night sky next to a space shuttle launch. 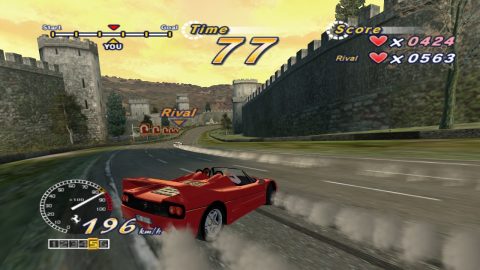 New to this edition is the use of the “slipstream“ technique during racing, in which you position yourself right behind an opponent’s car to reduce wind resistance and go above your top speed. Another added feature is the increased ease of play, as players receive less speed reduction when they crash their car. This makes the experience extremely easy for regulars, but friendlier to newcomers. The cameos between stages have returned too, including the jet from After Burner and the dragon from Panzer Dragoon.

Two special-edition cabinets saw a limited release under the denomination of “deluxe“ (DX) and “super deluxe“ (SDX), the first one supporting four players and the second up to eight. Strangely, the exclusive cooperative mode the SDX cabinet was created for, allows up to four teams of two players each to alternate control of the car throughout a race. These special cabinets house bigger screens with resolutions of 800 x 480 (using Sega’s Lindbergh hardware instead of the former Chihiro), plus an electronic billboard indicating real-time ranking and CCD cameras pointed at the players’ faces, 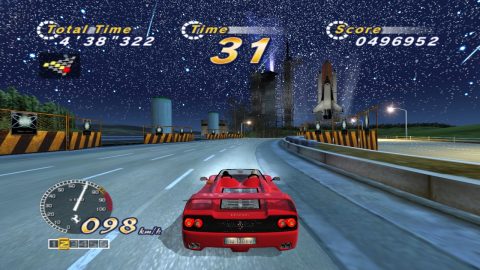 The North American and European console versions of OutRun 2 SP are called OutRun 2006: Coast to Coast, and were released for the PC, PS2, Xbox and PSP. Not only do these releases feature tracks from both games (for a total of 30), but they include a mission mode that manages to outclass the original: you now earn points when you play, which lets you buy different tracks, cars, songs and other bonuses. Unlockable music includes the soundtracks from both the OutRun and Turbo OutRun arcade games, as well as more arranged tracks. The Xbox version has support for custom soundtracks. The PC version, which can run at higher resolutions, is the best of these, though it is missing some graphical effects – lens flare and bloom can be restored by moving files within the installation directory others appear to be bugged on modern software, while the Xbox version is considered the best console port. The PS2 release is still an outstanding port, even if you need to connect to the PSP version to unlock certain stuff. The PSP iteration is no slouch either, but it runs at a lower framerate. Unfortunately OutRun 2006 is missing a few features from the original release, like the Daytona USA 2 and SCUD Race tracks. 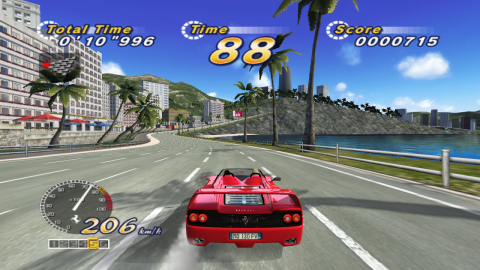 A version of OutRun 2 SP also appeared on XBLA and PSN as OutRun Online Arcade. This new port ditches all the extras of the former console versions, so it only has the 15 tracks from OutRun 2 SP, and is missing the challenge modes and extra music remixes. However, since Sega’s license with Ferrari expired, both OutRun SP and the PC version of OutRun 2006 are no longer available for purchase digitally, though the latter did have a retail release.

A mobile version of OutRun 2 was also released. Known as OutRun Mobile, it uses some graphical assets of the original arcade game, like the radio, but otherwise is entirely in 3D. As one might gather, since this predated capable gaming phones like the iPhone, it’s incredibly ugly, choppy, and not at all faithful to the original.