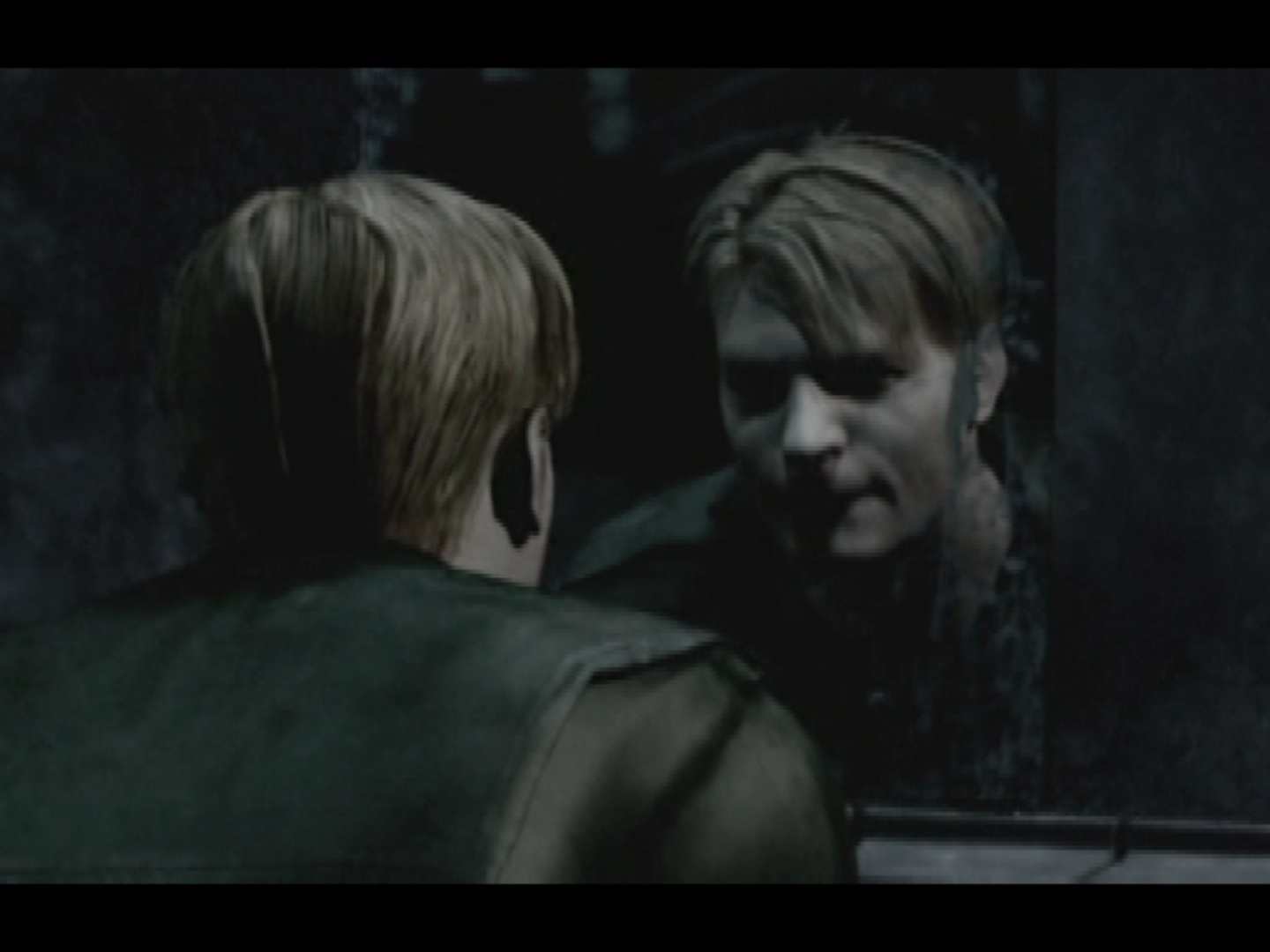 In just two years, Team Silent turned around and made a sequel for Silent Hill, putting it on the brand new PlayStation 2. Surrounded by a flood of new games for the year-old system like Konami-brethren Metal Gear Solid 2, industry-defining Grand Theft Auto 3, and a new entry in a long running series, Final Fantasy X, Silent Hill 2 released in September 2001. Despite being released among giants, Silent Hill 2 stood out and ended up being the game from the series most remembered and revered out of all. 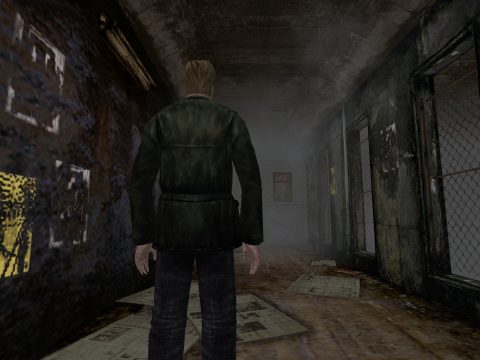 A man is once again searching for a lost loved one in the foggy town of Silent Hill, only this time, it’s his wife instead of his daughter. James Sunderland is summoned to Silent Hill after a letter from his wife, Mary, shows up, beckoning him to their special place in the town. Only Mary’s been dead some three years after she lost a battle with an unspecified disease. Along the way, James encounters Angela Orosco, a woman searching for her mother, and Eddie Dombrowski, a man attempting to escape the ravages of being bullied for his weight. A little girl named Laura, who knew Mary from the hospital, is also looking for her, much to his surprise and consternation. Rounding out the major characters is Maria, a mysterious woman who looks almost identical to Mary but has a more provocative personality. She accompanies James at points, acting as a kind of twisted love interest for him.

The town of Silent Hill, like in the first game, is a character on its own, and with the new power of the PS2 behind them, the team was able to upgrade their rendering of it. Signs for Silent Hill Auto Parts, Gozo’s Sushi, and Texxon Gas evoke a familiar but bizarre sense of Americana and its fabled Main Street. Locations, like the Wood Side Apartments and Brookhaven Hospital, continue that run down small town feel, often looking dilapidated even before becoming nightmares. And as per the original, when the siren rings, the town changes into a hellish “Otherworld” version of itself. Night descends upon James, the sky darkens, and the walls become draped in rust and blood. 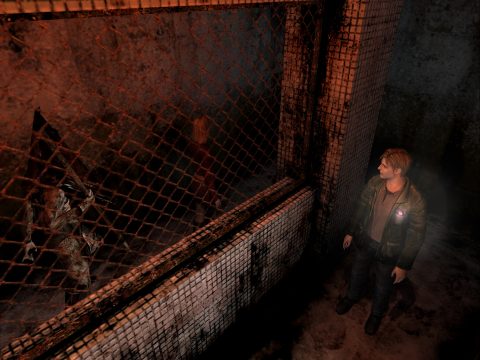 No discussion of Silent Hill 2 is complete without the game’s monster design, particularly the memorable Pyramid Head. The giant’s rusty red angular helmet, burlap sack robe, and huge sword remain perhaps the most iconic design of the series, a seemingly unkillable executioner who James can’t escape. The first enemy James sees lumbering in the fog, the Lying Figure, looks like a figure trapped in a plastic bag, wriggling around vainly to escape suffocation. The Mannequins, harmless looking, if bizarre, figures with two sets of legs one on top and one on bottom, come to life as soon as James picks up his flashlight. The radio, as with the first game, plays static whenever an enemy is near, and the enemies themselves make otherworldly gurgles and gasps.

As with Harry from the first game, James is an average guy, and he controls like one. He gets winded once you stop running, and it’s hard to point him in the correct direction, regardless of how you set up the controls. Holding the right trigger allows the player to look around using the right analog stick, James’ head following what the player’s looking at. The map is a button press away, and it keeps track of locked doors and dead end paths once more. Puzzles have confounding solutions more akin to Sierra adventure games than common sense. James uses cans of orange soda, hairs, and paint thinner in a variety of silly ways to advance. Many puzzles rely on uncovering random codes or numbers, meaning there’s no memorizing them, and scrolling through the seemingly randomly organized inventory, looking for just the needed item, can get tedious. For those so inclined, since the game divides up puzzle and action difficulty, there is an unlockable extra hard setting with tougher brain teasers. 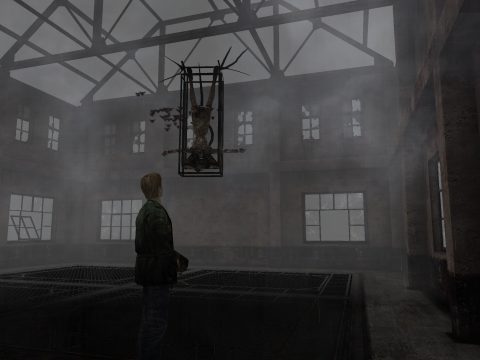 Aurally, the game is a rich well of nightmares. Both music and sound design were once again handled by Akira Yamaoka, who expanded upon the dark industrial sound of the first game. The sound of machinery and gears grinding together, hushed whisperings in the corner, low bass drones; the ambient soundtrack that follows the player through most of the game is chilling. The farther the player follows James’ descent into Silent Hill, the more wild, twisted, and unsettling the sounds become. Of particular note is the sequence in the prison, through its use of suggestion of horrors just beyond the screen. Thudding footsteps of a hidden warden lumber around above the prison cells as James wanders in and out of cells. An unseen horse can be heard faintly galloping around the darkness of a huge room with a three nooses in it. After the puzzle is completed, a horseshoe appears on the exit. Voice acting is a ‘love it or hate it’ kind of deal, with all sorts of odd deliveries from the cast that help realize the strange atmosphere of the game but can sound unnatural and awkward. Guy Cihi as James comes across as genuine, bewildered and a bit sad, which Monica Taylor Horgan provides a deep, sophisticated rendering of both Mary and Maria.

As James goes deeper and deeper, down each hole, elevator, and grave, so too does the nightmare deepen around him. Key to this is Maria, who keeps dying horrific deaths yet comes back to life, and reveals mysterious, intimate details that only James’ wife should know. It eventually becomes clear that the whole experience – the town and its monsters, Maria, Pyramid Head, everything – reflects his guilt for a sin he’s buried within his subconscious, which leads to a shocking twist. The other characters, Eddie and Angela, appear to be suffering in similarly unique ways, tailored specifically to torture them. What is most interesting is that little is known of what James thinks about his horrible situation, outside of the glimpses in the endings. Outside of the obvious torment of living in a type of hell tailored explicitly for James, the game doesn’t really pass judgment on him either – is he a villain or a tragic hero? Interpreting these aspects is left entirely up to the player, and that complexity is why Silent Hill 2‘s narrative is so highly regarded. 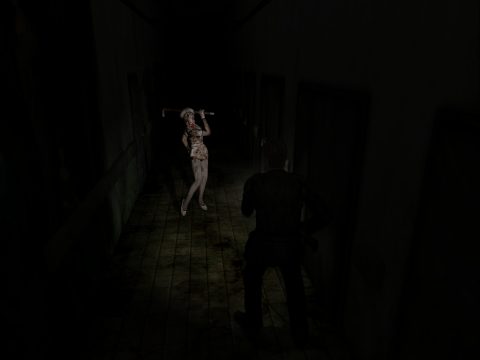 The consequences James faces are open ended as well. The game observes how the player, as James, acts, particularly towards Maria. Spending time at low health and looking at Angela’s knife tilts things toward a particularly downer of an ending. Keeping Maria close and defending her shows she’s overtaking Mary for James. Listening to Mary’s words and examining her letter and picture measures James’ devotion to his wife. The final boss changes form, depending on these factors. If this sounds familiar, it was a nascent version of the style of adventure games later developed by Telltale Games with The Walking Dead (and others) and Dontnod Entertainment with Life is Strange. Only, instead of a notification of “Clementine will remember that” flashing on the screen or Max rewinding time to try a different option, Silent Hill 2 keeps its cards close to the chest, only hinting at them. There are three other endings obtainable on subsequent replays, indicating that they might not be considered canon – two of them are also obviously joke endings, featuring a UFO ending similar to the first game, and another “Dog” ending where the entire story is revealed to having been manipulated by a sole shiba inu.

This ‘trick’ seems trite, in this day and age where it’s been done often, but like its contemporary Metal Gear Solid 2, Silent Hill 2‘s conclusion was novel, noteworthy, and intensely personal, in the same way Life is Strange or The Walking Dead have provoked similar sentiments more recently. And, interestingly, none of the endings are really canon. The next two games in the series only make passing and ambiguous references to the events of Silent Hill 2, saying Mary and James disappeared, and even less about other characters.

There are subtle differences between the versions of the game. The original worldwide PS2 release in September 2001 shipped with five endings, with the Japanese and European version coming with a making of DVD not that North America lacked. Four months later, an Xbox version was released, with an additional ending (the UFO ending) and a new scenario, “Born from a Wish,” focused on Maria before she met up with James. This scenario is brief, less than an hour long, but is definitely still worth checking out. Additionally, the main game was given a similar subtitle, called “Letter from Silent Heaven.” Later, these additions were added back to the PS2 version in its Greatest Hits version. A PC version, released the following year, lets players save at any point and features a wide array of video options. 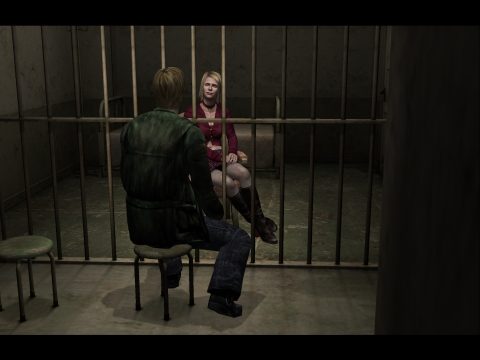 Silent Hill 2 was one of the two games in the Silent Hill HD Collection, released on the PS3 and Xbox360 in March 2012. Due to lost source code, Hijinx Studio had to recreate the game from incomplete builds, leading to slight but noticeable differences in art, many missing visual effects, and plenty of bugs. A new dub was also commissioned to replace the old one. Thanks to fan outcry, Konami included (most of) the original recording, letting players choose before starting a new game. The Windows version is playable with a patch but is missing some features, so emulating the PS2 version is probably the best way to play it. The 360 version is part of the Xbox One’s Backwards Compatibility program, making it another convenient, if compromised, avenue as well.

For more Silent Hill 2 coverage, our Top 47k Games podcast discussed and ranked this classic onto the big list, have a listen here if you like!