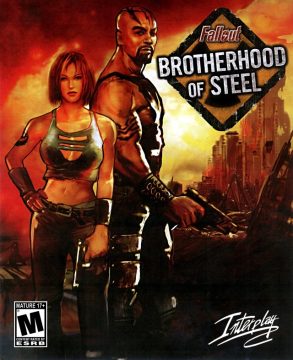 Oldschool PC RPGs don’t translate well to consoles due to controls-related reasons: the interface designed for mouse is difficult to navigate with an analog stick. Thus, games often need to be redesigned and simplified to lessen the need to navigate endless menus and submenus. The resulting games are often horrible, appealing neither to the fans of the PC games nor to the consol enthusiasts. Despite all that, a certain developer managed to create a console spin-off of a popular cRPG series which while not proving as memorable as the games it was based on managed to attract an audience and provide players with hours of fun.

That developer was not Interplay and the game was not Fallout: Brotherhood of Steel.

While fans of old and new Fallout games disagree with a lot of things about the series, there’s one thing that remains uncontroversial between those different groups: the dislike for Brotherhood of Steel. The game strays far from the gameplay and atmosphere of the original Fallouts, instead aiming to revitalize the interest in the franchise by mindlessly adding (or making them more prominent if they already existed in the series) things that should in theory appeal to teenage audience of the time: explosions, boobs, swearing, toilet humor, energy drink product placement and nu-metal. 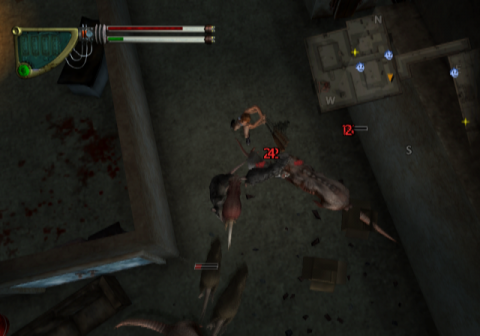 The game’s storyline focuses once again on Brotherhood of Steel Initiates (with once again a Brotherhood so tolerant it allows ghouls in, although unlike in Tactics there’s no attempt to explain this here). Their quest to find missing paladins will lead them to a confrontation with raiders led by a dominatrix (which for some reason was also a thing in Tactics, a ghoulish religious cult and a super mutatnt leader with an ambitious plan. The game takes place between Fallout and Fallout 2, prominently features a few important characters from the first game (Vault Dweller and Rhombus are even unlockable playable characters) and reuses many plot points from prior games, although once again it gives everything a more linear structure.

While the intro sequence is fairly well done (although it seems that the writer thought the apocalypse happened in the 1950s, not in the future inspired by science fiction works of that time), the game falls aprat as soon as we get to the first in-engine cutscene with ugly character models, seemingly bored voice actors (can’t blame them given what they got to work with) and a giant billboard advertising an actual real-life energy drink called Bawls. We’re then off to take quests from characters like a local prostitute and a smelly bartender who don’t get much characterization beyond what’s described. The stupidity doesn’t stop here as the whole game is filled with unfunny jokes, its references to Fallout lore are at best half-hearted and at worst nonsensical and whenever you fight against a boss, they play bands like Slipknot or Killswitch Engage in the background (because that’s the kind of music you associate with Fallout, right?). 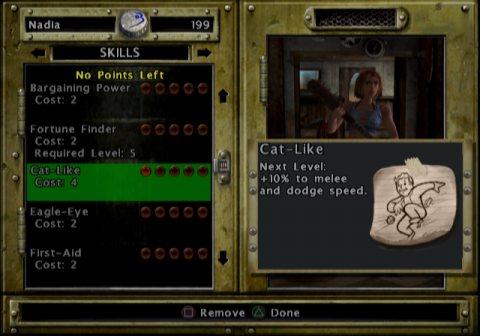 If the game was just stupid misguided pandering to stereotypical teenagers, the game could possibly be enjoyed the way badly made B-movies can be enjoyed but unfortunately, it’s also completely devoid of fun. The RPG elements are barely existent and it feels more like a Gauntlet clone but it’s not even a particularly good Gauntlet clone. It’s all mindless button mashing with occasional environmental hazards to avoid, artificially padded with bosses who take forever to kill and the need to backtrack through waves of same respawning enemies. The game is all about killing things (one of the earliest quests is simply to exterminate all the radscorpions in a huge warehouse) and collecting loot but it falls flat because the things aren’t to interesting to kill (there’s not much variety to them and they’re all either stupid melee enemies, stupid ranged enemies or stupid enemies whose corpses damage you if you touch them) and loot is equally unimpressive. The game’s camera is also zoomed in annoyingly close to your character, making you have to rely on a minimap far too often given the small size of the levels. 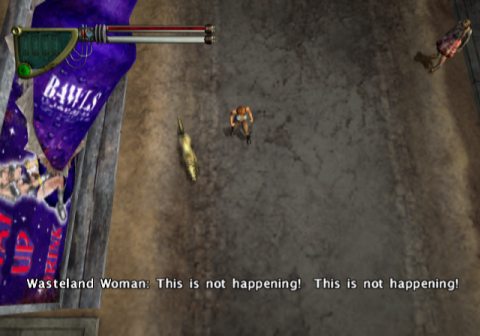 You can’t create your own character in Brotherhood of Steel: it’s either a guy who hits hard, a girl who runs fast or a ghoul who’s supposed to be a balance between the two. No matter what character you choose, the game is going to be played the same way. Completing different parts of the game allows you to unlock three more characters but it’s not like they play any different from the rest. When you level up, you can increase some of the character’s skills/perks but they don’t change the gameplay either (aside from maybe the perk which gives you a dog companion), they’re just incremental changes to variables. 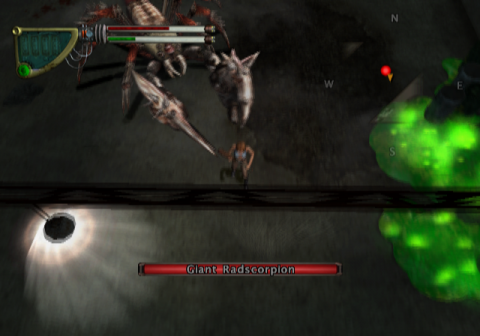 Brotherhood of Steel is based on a Snowblind Engine which powered Snowblind Studios’ Baldur’s Gate: Dark Alliance, another console hack and slash spin-off of a popular cRPG series but apparently much better (while I can’t speak of its gameplay, it certainly looks better). The engine was used without permission, resulting in a lawsuit against Interplay. Combined with everything else about Brotherhood of Steel, it shows how little anyone cared about making a good game: they used the first engine they could get their hands on (Interplay was a publisher of all Baldur’s Gate titles), created something resembling levels (and when they realized they’re too short they made you go back and forth between them), added some product placement and hoped that it will make money due to having Fallout in its title and featuring music by then-popular bands. Brotherhood of Steel is the worst kind of cash-grab.