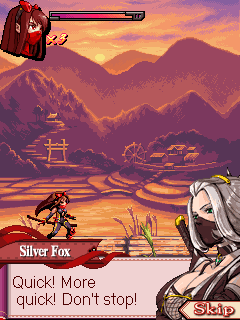 The world of Chinese cell phone games is a curious one, filled with offshoots of popular properties, both legitimate and bootlegged. Shinobi 2 is an officially licensed Sega product, though its ties to the Shinobi series proper are tenuous. The title indicates that this is probably meant to be the sequel to the mobile port of the arcade game released a few years prior, though it is a wholly original game. The Chinese title is Meiying Renzhe: Yanpiao Xiang, which translates to “Phantom Ninja: Flame Fragrance“.

The game stars a female ninja named Honoka, both a member of the Oboro Ninja clan and a CIA agent. Her mask is a little more revealing than Hibana’s. Her main weapon includes three swords with different abilities: fire, ice, and poison. Each enemy is also associated with a different colored symbol. If they are killed with the matching sword color, they’ll drop orbs to strengthen that weapon. Although Honoka does not wield shurikens, the swords have projectile attacks, and she also brings out a gun for when she’s hanging on ledges. She can also run straight up walls and bounce back and forth, though these abilities are rarely tested. 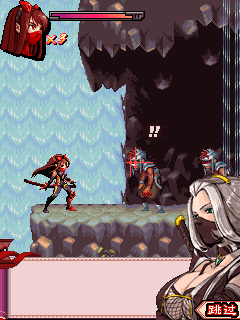 Some levels simply require that you get to the exit, others feature certain tasks, like obtaining a certain number of key cards, finding objects to unlock doors, or just killing all of the enemies. A few stages are simple shooting segments, where you control Honoka on a glider. Every few stages there are also bonus levels where Honoka automatically runs forward, and you must press colored buttons to defeat oncoming bad guys.

In spite of the setting and general theme, the game doesn’t play like any of the other Shinobi games, and feels more like a generic action-platformer. The graphical style is much brighter and more manga influenced than the previous games. The pixel artwork is generally attractive, though the quality of the animation is inconsistent. The game’s music is also negligible. 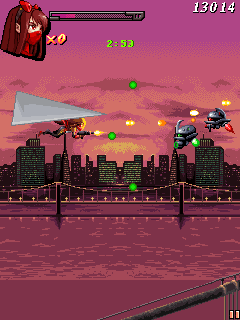 As typical of most mobile titles, the game falters with its controls. The hit detection never feels right, and enemies take far too many hits to kill. Even though you can double jump, it’s still difficult to land on platforms, which is troublesome considering that you take damage from long falls. A few areas take place on a moving train, and the physics make absolutely no sense.

Shinobi 2 is not particularly good but, like most of these obscure Chinese offshoots, it is amusing for fans purely from a trivia standpoint.