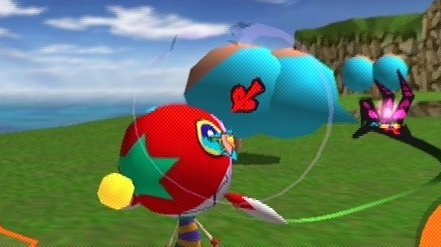 Stretch Panic – known as Freak Out in Europe and Hippa Linda (“Pulling Linda”) in Japan – is Treasure’s first game for the PlayStation 2, and it’s a very difficult game to like. While it’s crazy and innovative – like most Treasure games – it’s so obtuse and poorly implemented that it’s really only for the most die hard fans.

Stretch Panic puts you in a role of a little girl named Linda. Linda is the youngest in a family of thirteen, and all of her sisters have gone completely mad, having been transformed into a variety of odd creations – robots, monsters, aliens, etc. Only Linda, armed with a demonic scarf, can save them. 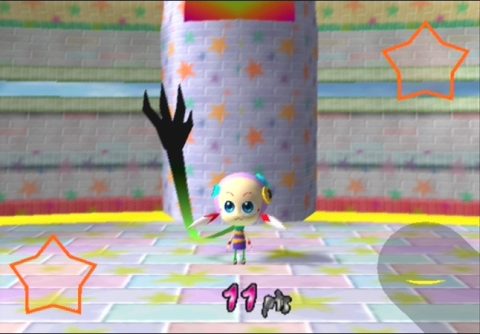 Since Linda is just a little girl, she isn’t exactly agile – she has no direct attacking powers, can barely run, and can’t even jump. The big gimmick of Stretch Panic is, of course, her demon scarf. While the left analog stick controls Linda, the right analog stick controls the positioning of the scarf. When you want to latch on to something, you target it and hit the R1 trigger. If successful, the scarf will grab onto the object. At this point, you have a couple of options: you can pull and stretch it out like taffy, damaging it in the process (the back of the box calls this “Stretchtisity Technology”). Alternatively, you can rotate the right stick and launch Linda through the air, attacking anything in her way. You can latch on to any floor or any piece of scenery too, although it’s rare that you’ll want to do this. Pressing the L1 trigger will also lock onto an enemy and reveal its weak points, if any.

At the core of Stretch Panic are twelve boss battles, each against one of Linda’s crazed, transformed sisters. Most of the battles are pretty straightforward – although you can pick at practically any part of your opponent to cause damage, they usually have one or two weak points that will greatly drain their strength. However, it’s not enough to merely beat each boss – draining their life will allow you to advance through the game, but you won’t be able to see the end credits. In order to fully conquer a boss, you need to successfully execute a Spirit Bomb move at least once a battle. By grappling onto a foe and pressing down on both analog sticks, you’ll create two additional scarf arms, which ensnare your opponent and strangles them. The wilder you spin the analog sticks, the more damage you’ll do. If you manage to keep the attack going for about five seconds – you usually need to do them at specific moments, and you can’t get hurt in the process – the exorcism will be successful, and your sister’s soul will be set free once you’ve drained them of their strength.

It’s a fantastic concept, in theory, but one has to remember that this is all done in 3D. Trying to target anything specifically is incredibly difficult, because it’s nearly impossible to judge the depth of the scarf’s arms. So it’s usually just easier to just blindly pick and pull at whatever you can get your hands on, which kind of eliminates the point of having so much control over the scarf to begin with. It doesn’t help that both the movement and camera are both awkwardly implemented. This is technically Treasure’s first real 3D game – Sin and Punishment, despite using 3D graphics, still controlled like a 2D game – and it’s clear that they haven’t gotten it quite right. Linda can barely turn, and dodging attacks almost seems like more a matter of chance than a matter of skill. 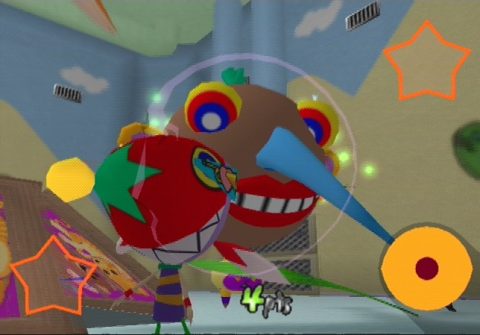 The game’s bizarre structure just makes things more annoying. You can’t just go from boss to boss – instead, you need to rack up points in levels called EX Worlds. These stages are fairly short arenas filled with creatures called Bonita Zakos, women with absurdly gigantic balloon breasts. They’re too well endowed to be efficiently attacked from the front, so you need to get behind them and snap from the back. You can technically exit these stages whenever you want, but killing these “babes” is the only way to get more points. These stages are pointless and weird (and just a wee bit tasteless), mostly because the Bonitas don’t really fight back. They’ll try to push you off edges and occasionally use their boobs as helicopter blades (!!) to fly around a bit, but there’s no real challenge to any of it. It is, quite literally, filler in the worst sense of the word. Although points are used to enter into boss battles, they’re also required to execute Spirit Bomb attacks. If you screw up a Spirit Bomb, you’ll lose those points – and if you run out, you’ll need to start the whole battle from scratch if you want to beat them. Alternatively, it’s possible to grind for points and then spam the bosses with Spirit Bombs, which completely throws off the balance of the game.

Stretch Panic isn’t exactly technically accomplished – the low polygon models and sparse environments are typical of early PlayStation 2 games – but it isn’t all bad. The art style is nothing but unique, showcasing a variety of imaginative creatures that occasionally venture into the cutely disturbing. Some of the stages are a bit on the dark side, but the brighter stages are appropriately psychedelic. Even though it sorely lacks Treasure’s tight and simple game mechanics, it does exude much of the same wacky charm. The music, however, ranges from forgettable to irritating. 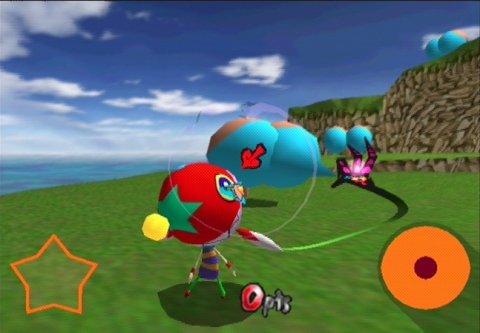 For the most part, Stretch Panic is a total mess. All of the stretching and flinging leads to some interesting concepts, and it would’ve been so much better had the game been done in 2D, which Treasure is clearly far more experience in. As it is, Stretch Panic has some innovative visuals, a ton of great ideas, a small handful of cool boss fights, and a huge amount of lost potential. Gamers with the patience to learn the mechanics will find a game with plenty of imagination, but little else to back it up. 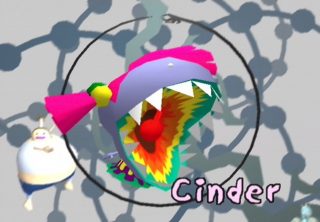 A semi-cute girl with an enormous head, who gets significantly less cute when she opens her mouth and breathes fire all over the place. Her weak point is her uvula, which is nearly impossible to grab. 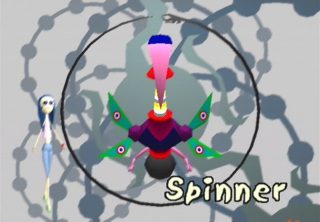 Spinner….well, Spinner spins. Its weak point is both its misshapen head and its bottom. 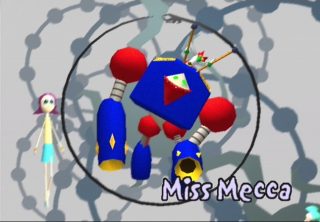 This particular lass apparently had a thing for giant robots, so she’s been turned into a mad scientist. 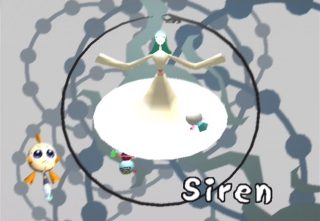 Siren starts off in a peaceful land filled with flowers and cute little creatures, who crowd around and sing the praises of their beautiful leader Siren. Then a huge mouth gobbles them up, the stage turns hellish, and Siren morphs into a she-devil, commanding any followers that were swallowed up to attack. Naturally, if you can toss them aside before they’re eaten up, you’ll have a lot less problems with this fight. 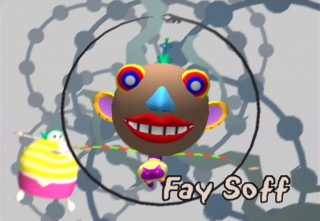 Perhaps the most frightening thing rendered on the PlayStation 2, Fay Soff is like a Mr. Potato Head gone horribly, horribly wrong. 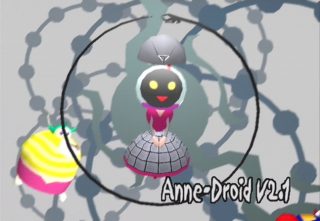 This girl has been turned into a robot floating in outer space. The whole battle is fought on a tiny little planet that rotates as you run around. This may not seem too impressive now, but it’s a cool effect that predates similar stages in Ratchet and Clank and Super Mario Galaxy. 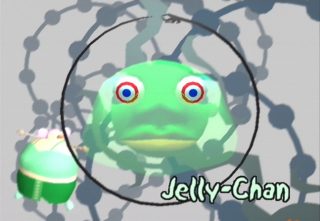 A giant blob with eyes that will pop out and attack. This thing is vaguely reminiscent of some of the weird bosses found in Black’s Maze back in Gunstar Heroes. 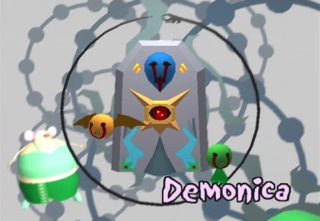 Probably the most interesting battle in the game. You never technically “see” Demonica (outside of her pic here and in the manual.) Rather, you begin in a dark and empty room, with a giant monster running around the shadows, trying to barge in. Your task is to make sure she doesn’t force her way in, or you instantly die. So, you need to attack while she’s trying to bang on the doors. 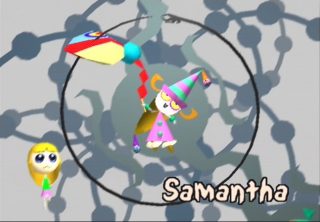 A cute/evil little girl not unlike Linda, although she has a fishing rod. If you tug on said fishing rod at the right moment, it’ll cause Samantha to vomit copiously. 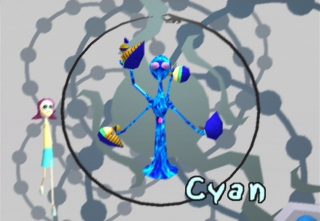 An alien-like creature who’s kinda the opposite of Siren. In this battle, there are also numerous little creatures, except they’re on your side. Cyan is technically impervious to your attack, so you need to defend these little guys until they use their attack to solidify her, allowing you to strike successfully. 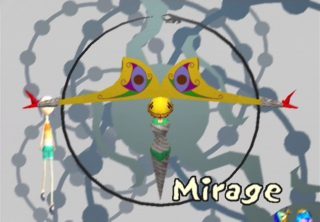 This particular fight takes place in the desert, as Mirage – a big sorta-Egyptian thing shaped like a screw – creates sandstorms to send your way. 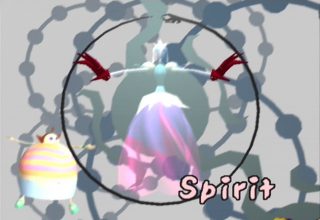 The final boss is actually a bit of a pushover. She’s a ghostly apparition that looks like a princess, and attacks with two extending arms.

Shadow Hearts: From the New World