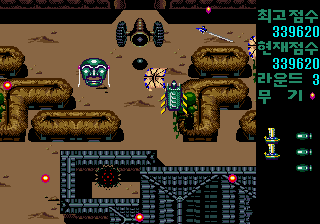 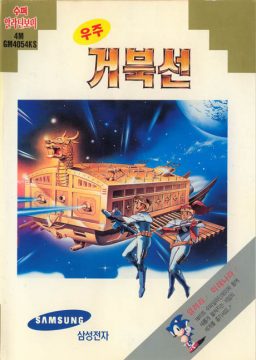 It may sound surprising, but long, long before they’re testing the water with Nuon or VR accessories, Samsung Electronics already used to sell assorted gaming machines in South Korean market. In 1989, they signed a contract with Sega to import the Master System into their region, under rebranded trademark Samsung Gamboy, deliberately sidestepping the unconditional ban often put on the Japanese culture at that time. This deal soon proved to be a mega hit, which not only promoted the company to be one of the biggest publishers in the country, but encouraged them to expand the business, distributing all of Sega’s game machines until the Saturn era. In the meantime, Samsung’s ambition was further realized around in 1993, when Sega Genesis (sorry, “Super Aladdin Boy”) had already arrived there, as they announced to become the developer by themselves and ambitiously unveiled a shoot-em-up called Uju Geobukseon (“Space Turtle Ship”).

In the end, it appears Samsung didn’t have much faith in the plan, as Uju Geobukseon was the only thing coming out of this. The game has since been routinely derided in the coming years, often seen as a cheap cash-grab without any caring over its quality. That infamy isn’t entirely undeserved because, at a glance, Uju Geobukseon looks beyond appalling. The color is inexplicitly muddy, the art direction is nonexistent, and overall it hardly looks better than most of 8-bit shooters. All of this is accompanied by some of the lousiest soundtrack you’d ever hear on the Genesis, about half of which seems to be played off key. If it weren’t for Samsung logo on the title screen, anyone could’ve had hard time telling whether this game was a legitimate commercial release and not some bootleg cartridge nabbed from grey market. 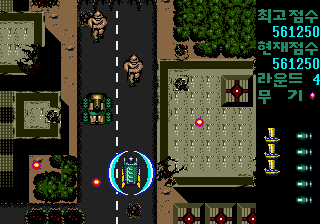 To its credit, the game starts off promising: in the near future of 2020, a super computer catches virus and goes rogue against earth defense force. Young children Titi and Coti are deemed the humanity’s only hope, forcing a group of scientists to build a state-of-the-art vessel to aid their mission. Cheesy plot aside, this spacecraft is the titular “Space Turtle Ship”, based on a real warship used sporadically by the royal Korean navy around the 16th century. It gives the game a bit of personality, even if its actual design in the game is crappy (it looks more like some beetle), and perhaps the developer had taken a note or two from Compile’s MUSHA. Alternatively, the concept might’ve been inspired by 1979 animated film Narara! Ujujeonham Geobukseon, which was in turn a Korean answer to 1974’s Space Battleship Yamato.

Gameplay-wise, it generally fares better than what its look will make you think of, however damning with faint praise that is. You have two togglable weapons at the outset as well as smart bombs, though the latter isn’t nearly as helpful for crowd control due to their slow, clumsy reaction. Collect enough items obtained from certain enemies, and it’ll grant you a few useful upgrades such as shooting out more projectiles from your arsenal, making your ship slightly faster, or acquiring a stronger set of weaponry. This system also works as your health, as taking hits will cost you a downgrade, and eventually your life if none are left. 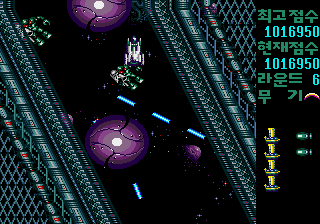 These make Uju Geobukseon a somewhat functional shooter, but the game itself remains sloppy and unforgiving. The turtle ship is a bit huge and slow to effectively dodge everything, so it’s too easy to accidentally run into enemies and lose your weapon, especially when the game likes to send blazingly fast ones after you at times. There’s barely invincibility time after damage, so extended collision with anything can potentially kill you in a second. Upon your defeat, the game removes all your power-ups and sends you back a small distance. This can put you into aggravating situation hard to get out of, since your ship is incredibly pathetic on start, and most of the stages are designed under the assumption you’re strong enough to erase dense bullets filled on the screen. Setting difficulty to the lowest doesn’t much ease them off.

Uju Geobukseon is technically pretty short, clocking around 30 minutes to finish a total of 8 levels. Oddly enough, the first one takes place in Mesozoic era plateau and pits you against a herd of pterosaurs, an opening act that maybe fits better in The Magic School Bus. Unfortunately, the game doesn’t come up with much of anything to keep the levels visually attractive – the parallax scrolling in stage 2 is probably the most gorgeous thing it can show you – so you’d better get used to ugly browns and blues that plague the entire game. Regrettably, despite the classical Asian motif shown in the intro, that idea never truly comes into play. Only one level ever exploits it, which features castles and villages from Joseon dynasty. It doesn’t go well with the sci-fi setting, but at least it’s original. The rest of the game is spent in uninspired city warfare and space battle, with some bizarre objects like kites, giant swords, and bouncy balls (?) occasionally replacing the aircrafts. 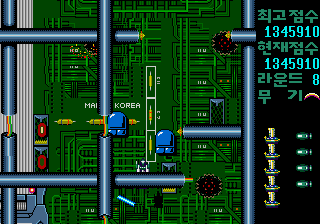 The boss fights are slightly more interesting, but only because their designs are impossibly silly. They’re clearly meant to be menacing, but end up looking like rejects from low rent Halloween sketchbook – one of them is a skeleton in gooey coat who tries to slam you with yo-yos. It’s laughable, and almost makes you forgive that they’re barely animated, only able to float around the screen. Not so forgivable is their uneven difficulty. Like the stages before it, they tend to overwhelm the player with sheer amount of projectiles, often more than the turtle ship can handle, and dying even once means you’re left significantly underpowered to be a match for them.

There isn’t much else to say about the game without picking on its rudimentary design, but it does get profoundly strange near the end. The final level puts the player into what appears to be a motherboard of some machine, which then sends out an army of Samsung-labelled chipsets, trackball mice, and CRT monitors. This is a prelude to decisive battle against the super computer itself: an IBM-style desktop hardware on top of horizontal computer case. At least this marks one thing memorable about this game. 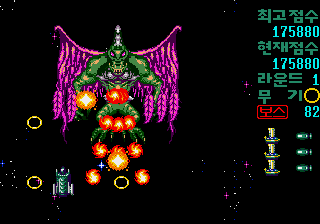 Uju Geobukseon was developed by a team of four guerrilla members internally recruited in Samsung. According to some sources, the development team formally revealed two more games to come – a mysterious 1-on-1 fighter Princess Fight, and an urban-themed beat-em-up City Heroes. The latter actually went into production and reportedly got completed, with some favorable reception from journalists, but Samsung chose not to release it.

Below is extensive coverage from the May 1993 issue of Game Champ, which includes a short interview with Uju Geobukseon‘s programmer Lee Yongwook. Thanks to GameMeca for publishing the magazine online.

Q: Tell us about how Uju Geobukseon was created.

A: The game was initially planned back in May 1991, and the project was wrapped up last year on April. Due to some circumstances, we were able to ship the game only recently. There were four people to help this game see the light, including me as one of two programmers, with supports from a director and a graphic designer. […] Since this is the first 16-bit console game ever developed here, all of it had to be built from scratch entirely. We struggled on every aspect of programming, especially the graphics which we had no specialized tools to draw. It was an extraordinarily troublesome job to take.