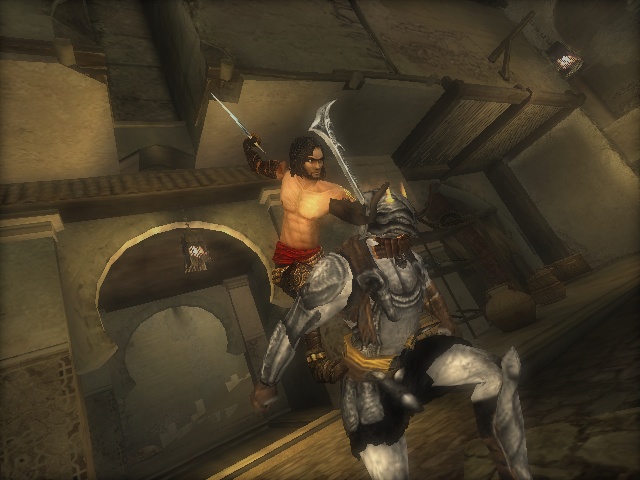 After deviating into goth-rock territory with Warrior Within, the third and final game in the “second-gen” Prince of Persia series returns a bit closer to its roots. The Prince and Kaileena have escaped from the Island of Time, only to find that Babylon is once again under attack by the Vizier. Players of the first game will remember that the Prince reversed all of his actions, so his kingdom was never destroyed – well, history repeats itself, as he also never defeated the Vizier. Kaileena serves as the narrator this time, but is killed early on. Farah makes a repeat appearance as the Prince’s companion, although she has no memory of her time before with the Prince.

The gameplay is a mix of The Sands of Time and Warrior Within – the lame backtracking and time traveling elements are gone, but the more advanced combat system is still in place. Forget the stupid battle taunts, angsty voiceover and metal music – Yuri Lowenthal from Sands of Time is back as the Prince’s voice, as well as the sweeping orchestral soundtrack. Yet the game is still darker and more violent than The Sands of Time.

The game seems to have taken some inspiration from Ubisoft’s own Splinter Cell series, as the biggest addition to The Two Thrones are stealth kills, which allow you to take out most enemies quickly and silently. Considering that combat is still the weakest part of the game, and fights drag on longer than ever before (outside of the passages played as Dark Prince, who is much stronger), it allows smarter gamers to avoid most of it, although you can still rush in and fight if you please.

The Prince also learned a variant of Sam Fisher’s Split Jump to hold himself in between narrow walls. Apparently, the release of God of War earlier the same year had taken its toll from the Prince as well, as stealth kills and boss battles are determined by quick time events. The frustratingly uneven distribution of save and reset points, on the other hand, feels more like a throwback to 1989. 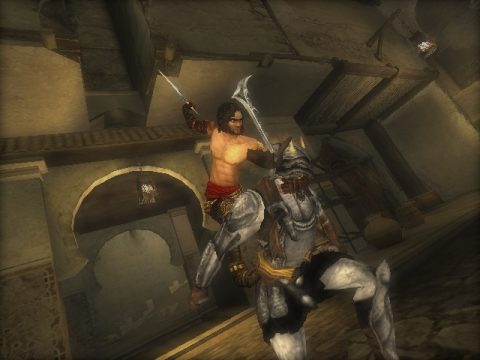 Not far into the game, the Prince meets the evil Vizier. The villain seizes the Dagger, sacrifices Kaileena and turns himself into a sand god, while the Prince gets “infected” with the Sands, which turns him into part sand-monster at various points during the game. In these segments, the Dark Prince (as he’s called) wields a huge chain, which can not only demolish bad guys, but is also used to swing Bionic Commando-style from walls and ceilings. The problem is, the Dark Prince’s health is constantly depleting, so he has to pick up magical Sands every couple of seconds, making these parts feel like annoying time trials. The Dark Prince also plays a big role in the plot, as the “good” and “bad” parts of the Prince’s personality argue and bicker like Gollum from Lords of the Rings. The gameplay is further mixed up with a few chariot race segments, although they can get quite frustrating, since the chariots tend to fall apart quite easily.

The new additions are nice, but the gameplay and setting still just feels too similar to the predecessors, especially since these have been coming out at a yearly pace. Judged on its own, however, The Two Thrones is still very good.

A year after release, this game was ported to the PSP and Wii under the name Prince of Persia: Rival Swords. The Wii version adds WiiMote functionality for fighting, which doesn’t seem exactly necessary, and also removes all of the blood in order to receive a Teen rating. The PSP version once again has a handful of extra stages.

The PC version is available DRM free at GOG.com. 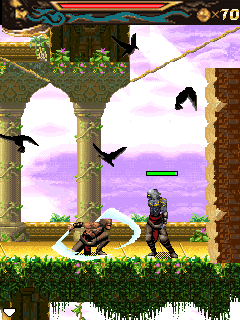 The mini version of The Two Thrones finally brings over almost all moves of the “big” prince. Wall jumps are back, though not nearly as frustrating, along with pole swinging, air attacks and the obligatory wall running. The combat system is even more advanced, although unfortunately it also introduces quick time events, mostly with the bigger mini boss minotaurs and giant snakes.

The controls are much more responsive than ever before, in the beginning it almost feels as if the game plays itself, until the later sections that require more complex maneuvers make the still flawed input recognition apparent. Slow motion is used a bit more frequently, although for the most part it’s activated automatically in particularly cinematic situations, when the prince has to duck under a boulder or dodge the two giant snakes so they bump into each other with their heads.

Of course this wouldn’t be The Two Thrones without the Dark Prince, and there are several fireplaces that serve as transformation triggers. Like on the consoles, the hero wears a powerful whip used not only to subdue enemies, but also to go Indiana Jones and use far away poles to swing out of dangerous situations. In best Prince of Persia tradition, the fight against “yourself” isn’t missing, either. 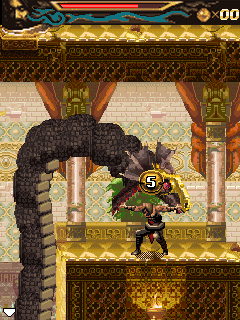 The Two Thrones for mobile phones still has the disadvantage that it is for mobile phones, but if you get stranded on an island with no other gaming devices, it’s one of the better action game choices you can make.