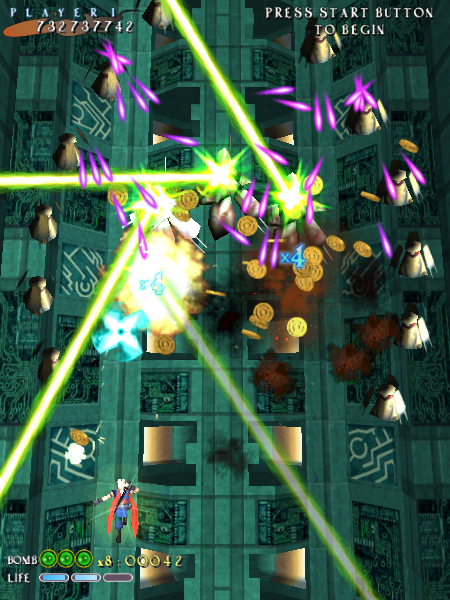 Two years after the first game’s release, Alfa System created a sequel that brings back the investigators from the first game, with a few new faces. It originated in arcades, and was eventually ported to just about every popular console at the time.

Much of the core gameplay is unchanged. The Tension Bullet System where grazing bullets earns you extra points and firepower is still intact, as are the Shikigami and bomb attacks. Each of the playable characters no longer have upgradable firepower, but to make up for it, they each have two varieties of special (Shikigami) attacks to choose from. The returning characters’ normal attacks are unchanged, aside from that they can no longer be powered up like in the first Shikigami.

What gives Shikigami II extra replay value is that every single character has a unique storyline path when played with a second character , offering incentive to take on the game with a friend, if you want to see how crazy the shared stories can get. (Very crazy, in fact.)

Shikigami no Shiro II was originally released in the arcades, first ported to the GameCube, then later released for the Dreamcast, PlayStation 2, Xbox and PC. Each version had different limited edition packages – the DC version included a soundtrack, the GameCube version had a figure of a cat, and the PlayStation version had a figuring of the Witch, Fumiko. Only the PlayStation 2 port made it outside of Japan, under the name Castle Shikigami II, courtesy of XS Games in American and Play It in Europe. The home versions include a very nice art gallery, complete with high-res artwork. It also included new modes of play with extra enemies and an ‘Extreme’ Mode in which enemies leave behind bullets after dying, for even more difficulty. There’s also an arrange BGM option with remixes of Shikigami no Shiro‘s OST used in place of Shikigami II‘s. 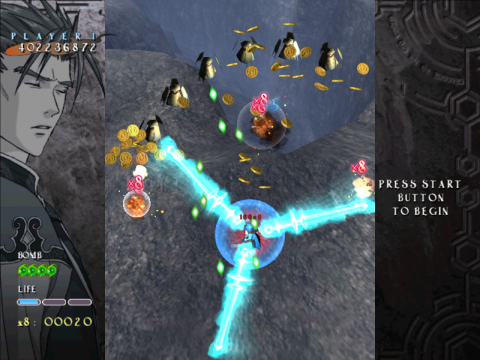 The horizontal setting doesn’t use the whole screen, but frees the playing field from status displays (Windows)

This time XS Games treated the game with a little more respect, as most everything is faithful to the Japanese version. The packaging actually advertises the game for what it is – a shoot-em-up with anime-influenced characters blowing up stuff. Even the tate option is still present.

However, this is easily one of the worst translations in the history of video gaming. Unlike its predecessor, Castle Shikigami II includes full voice acting, and All the mid-stage dialogue is completely spoken. These have been translated and dubbed for the English localization, but none of it makes sense, at all – presuming that the dialogue was Babelfished is an insult to online translators everywhere.

“You have two choices: beaten then caught, or caught then beaten.”

“Beat ’em down then jump. I just started now.”

Furthermore, the voiceovers are all done by people who obviously have no acting talent whatsoever, and seem to be confused that what they’re reading is even English. (Check out Audio Atrocities for full dialogue clips.) At least the in-game voices were kept in Japanese. Purists will definitely cringe, but it’s definitely worth checking out for the comedy value alone. What might come as surprising is that the Japanese version’s dialogue was just as senseless, if not more so. It’s just that XS Games was just a little too literal in their translation treatment. Unfortunately it seems like these were all excised completely from the European release.

The dialogue wasn’t the only aspect of Shikigami II that received a weak treatment. Even the instruction book looks like it came from the result of a literal translation. As a bit of an in-joke, the Shikigame attacks are now called “Mobile Light Force 3” attacks. It still manages to be informative, but you have to wonder if anyone at XS Games knows how to proofread their products before they go to publication. Fortunately, despite their lackluster efforts, XS deserve credit for bringing over the second game mostly untouched, and at an extremely cheap retail price of $10.

Castle Shikigami II has a lot going on in its story, but the bad translation work doesn’t help much in the way of making any sense of it. Still, it has a lot to offer for series vets. A wide variety of stages and bosses alike, even more difficulty, and some nice music to go along with it. Even better for the US fans, this would be XS Games’ last Shikigami endeavor in the states. A more deserving publisher would be the ones to get the rights to the next game in the series.

The principal character of the series, a private detective of H&K Detective Agency, returns. His Shikigami, Sazae, is still in tow. Each form determines the nature of Sazae’s attacks. She can either target the enemies closest to Kuga, or the ones closest to the point at which she was summoned.

A shrine maiden from a strong religious home, she has never gone to school due to her upbringing. The new incidents have caused her to leave by train, and come to Tokyo. Sayo’s special still consists of Phoenix familiar. It can either attack in a wide, slow radius(shown) or with a narrower(and faster) one.

A freelance detective serving the same agency as Kohtaro, Hyuga & Kuga. (Who owns the agency is anyone’s guess.) He’s working on the case at the request of a young client,and also has access to black market contacts. Due to having the blood of a wolf god, he becomes a werewolf when enraged. His Shikigami attack can either be used in the form of three lightning spheres with a long frontal reach, or six used forward and back, with a shorter reach.

The witch with the golden gun returns, and she still intends to marry Kohtaro. A German who migrated to Japan, she follows Kuga’s trail to put a stop to the events before they can harm her would-be husband. Her Shikigami attack consists of orbital bombardments summoned by Munchausen, her butler. He can either bring down one massive blast, or a smaller assortment of five connected blasts.

Fumiko in a younger form, supposedly the result of a spell gone badly awry. ‘Chibi’ Fumiko has the same attacks, and almost the exact same dialogue, just with a younger voice. She can be selected by moving the cursor continually to the right while highlighting Fumiko. Her normal shot is weaker, however, her Shikigami attack is much more powerful to compensate.

A Korean Tae Kwon Do instructor, he closed his dojo and left his country to avenge the murder of one of his students. His Shikigami attack can either be used as two controllable swords(which can be aimed anywhere from forward to back), or three swords which spin at fixed points.

One of the two new characters, a mysterious girl seeking an unknown man. Her Shikigami attacks utilize her cat as a barrier, which then fires back at enemies with the charged up energy. Her normal fire pattern consists of static lasers fired from two spheres at her sides.

The other new character. An American ninja, formerly a friend of Kohtaro, he now considers him his rival. He loves Japan. He uses a very fast string of shuriken attacks for his normal shots.

According to the few bits of the translation that make sense, the bosses are all members of a group called the “New World Order”.

A ghost of a warrior. Flirtatious to a fault, she seems to have bad blood with Fumiko.

A guardian of a shrine, he now guards the submerged part of the castle. He knows Sayo from somewhere, possibly her work as a shrine maiden.

An older and younger brother, strong soldiers who gained immortality by guarding the castle. They will never stop fighting.