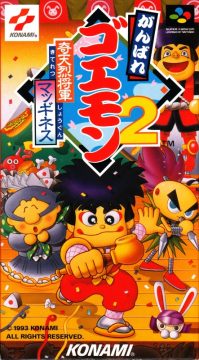 Kiteretsu Shogun Magginesu, or “The Strange General McGuinness” is a not-so-subtle allusion to Matthew Perry’s visit to Japan in the 19th century. Ganbare Goemon 2 features a general from the West known as McGuinness, who has invaded Japan with his army of bunny men with his airship and army of bunny men, led by warriors known as the Marvel 5. 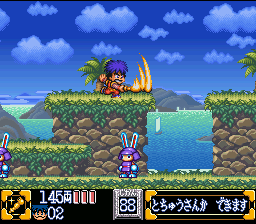 This game takes Goemon straight into platformer territory. It’s also the game that defines most of the rest of the series, both structually and aesthetically. You move around levels via a world map stage select (similar to Super Mario World), with some occasional towns to shop in. This is where the series developed the unique art style that’s been used in almost every game afterwards. There are three playable characters – Goemon and Ebisumaru are back, with Sasuke the clockwork ninja making his first appearance. Each character has their own unique attacks, although you can’t switch between them ingame – you’ll have to reset the console. It includes a save feature (as do the rest of the SFC games). With two players, one can piggyback on the other. 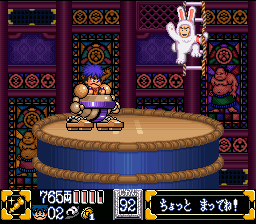 Goemon 2 also serves as the introduction to the legendary Goemon Impact, a large, sentient mecha that looks like Goemon You begin each Impact battle by running through the country-side, smashing into buildings and jumping over plateaus in order to gain energy. When you finally reach the boss, you’re given a cockpit view of the action. You can’t move around in these segments – all you do is guard against enemy attacks and attack when they drop their defenses. They can get very hard until you get the hang of them, but they play sort of like Super Punch-Out, except with lots of nifty Mode 7 effects. 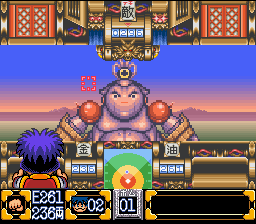 Also new are several goofy vehicles – including mouse cars, sumo mechas and robotic fish. There are the usual mini-games, including a split-screen shooter, and a 3D racing game, with the coolest being a level from the arcade shooter Xexex.  Considering the game was never ported to a console until a PSP compilation, it’s a real treat to be able to play some of it, even if the slowdown is horrendous. There are some great moments, like kitchen and ski resort levels, and a few fun parodies, like a hidden battle against Dracula, and recurring enemy named Kabuki, who returns as a Terminator-style cyborg. You can even meet some other Konami characters. It’s a true classic, though a bit on the easy side compared to other Goemon games. 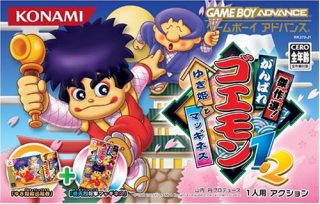 Kessakusen! is, as the title suggests, simply a port of Ganbare Goemon 1 and 2 to the Game Boy Advance. The screens resolutions and status bars were changed to suit the GBA’s screen, but the main graphics are identical. Like most SNES-to-GBA ports, the sound suffers a bit, moreso the first game than the second game. Other than the addition of a save game function for the original game, the only real difference is that you can change characters on the fly in Ganbare Goemon 2. 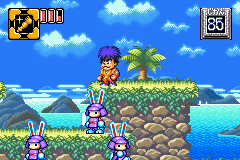 The minigames are now accessible in the main menu, along with the Gradius and Xexex games. In other words, nothing too spectacular. It’s much better than Konami’s Contra 3 port, and it’s nice that they stuck two games together (considering most ports only have one). As usual it only saw release in Japan, most likely as a prelude to Goemon’s DS adventures.