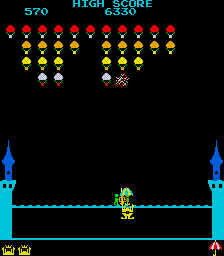 Released by Namco in the summer of 1980, King & Balloon is a shoot em up in the vein of Galaxian, but trades the outer space theme for pseudo-medieval setting. In the game, the player controls two green men who carry a cannon, as they defend the king below them from getting abducted by the balloons above, which keep invading the lower part of the screen while also shooting projectiles. Once all the balloons are shot down, the game moves on to the next level.

One thing that makes King & Balloon unique is that you don’t lose a life when hit. Rather, you respawn and keep on playing. The only way to lose a life is letting the king get abducted. Another interesting mechanic of note is that the balloons stop attacking and descending when one grabs ahold of the king, and they will keep still until the king is back on the ground. This creates a risk versus reward mechanic and entices you to let the balloon carry the king high enough so you can take out more balloons, then rescuing the king just in time.

King & Balloon was also one of the first games to have speech synthesis, and it still holds up better than most contemporary or even later examples. The king says “Help!” when abducted, “Thank You!” when rescued, and “Bye bye!” when he leaves the screen. There are actually different voices for the game in Japan and the US version, with the Japan version having a slight Japanese accent. 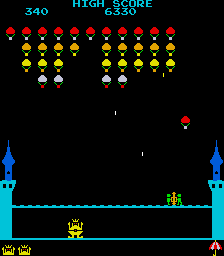 Despite the interesting gimmicks, King & Balloon feels cheap in some core areas. A lot of the sounds are reused from Galaxian, including the droning sound of the balloons and the shots of the cannon. The graphics, while intelligible, still have some odd color choices. The king, with his red eyes, black face, and yellow body looks more like some kind of evil robot. The balloons also have less detail than the Galaxian aliens, so it feels like a step down in a way. The use of gray for one of the balloons but blues for the castle is also sort of bizarre. Much like Galaxian, the game repeats after 48 levels.

In 1984, King & Balloon received a port for the original MSX. Most of the game translates faithfully, except for the voices. Now the king’s words appear on the screen as text. The game was also available for the PlayStation in Namco Museum Encore, the PSP on Namco Museum Battle Collection (which is the first time a console port of this game ever reached stateside), the Xbox 360 on Namco Museum Virtual Arcade, and the Wii on Namco Museum MegaMix. While King & Balloon is certainly not Namco’s best fixed shooter and has some odd design choices, it’s still an enjoyable experience with some interesting gimmicks and is definitely worth checking out. 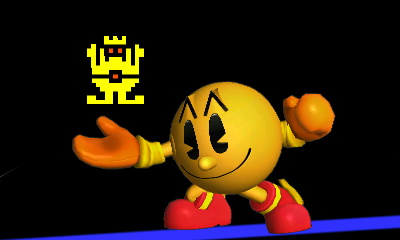 The King would later show up as a cameo in the Super Smash Bros. series. Pac-Man, representing Bandai Namco, taunts by pulling out a random Namco character called Namco Roulette. The King comes out and says “Thank you!” For unknown reasons, this is only in the 3DS version of Super Smash Bros. (Screenshot provided by Nintendo Everything.) 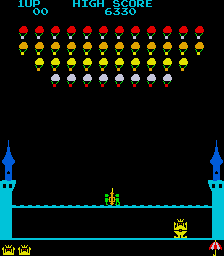 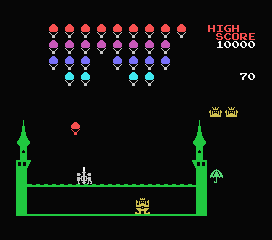