Sega’s Shinobi and Capcom’s Bionic Commando are both names that draw a great deal of love from retro game fans. One offers fast paced ninja action, while the other has incredible swinging acrobatics. Put them together and you get the excellent Game Boy Advance game Ninja Five-O. 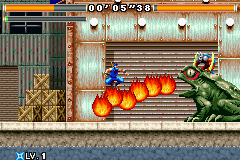 Developed by Hudson and released by Konami in mid-2003, Ninja Five-O went entirely unnoticed by pretty much everyone, and disappeared from store shelves almost immediately. It was also released in Europe under the slightly better name Ninja Cop, though strangely it did not receive a Japanese release. 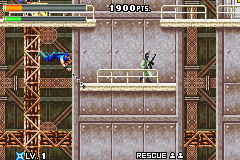 As for the plot, various bad guys are committing crimes and taking hostages all over town. The police are scared witless, and all of the ninjas are busy crying to their mamas. As Joe Osugi, specialized anti-terrorist ninja, you’re the only man for the job. In the beginning, you can choose from three stages (each with three sublevels and a boss), with more opening up when you complete those. You make your way through classic terrorist situations like banks, airports, harbors, caves, and finally the enemy’s secret base. 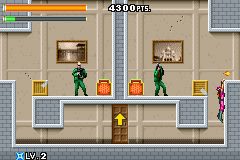 Instead of being a strictly linear affair, Ninja Five-O puts you in a series of gigantic, interlocked rooms. In each level, not only do you need to rescue all of the hostages but also find the colored keys to unlock the various doors scattered throughout. Don’t worry about going on long hunts to find these things, though; despite the nature of the game, you won’t get lost or end up going in circles, and there are always plenty of bad guys around, so it never gets dull. 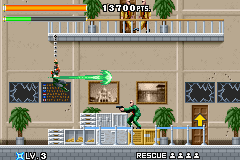 Like most video game ninjas, Joe is equipped with an unlimited supply of shurikens. Finding power ups will let him shoot fire (!!) and lasers (!?!), but getting hit will decrease your weapon level. You also have a sword (used with the R button), which lets you slice through enemy defenses. Toss in two kinds of ninja magic – one to become invulnerable and one to kill all of the enemies on screen – and you’ve got a pretty complete arsenal. There’s even a pair of binoculars that lets you scope the surrounding area for bad guys. 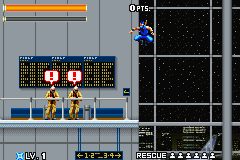 Joe’s most useful item is a grappling hook that lets you swing from platforms to platform. It actually feels quite a bit like the grappling laser from Super Metroid, in that you can latch on hooks and swing in circles, until the dizziness forces you to stop screwing around and play the game properly. You can’t use it to climb through ceilings like in Bionic Commando – rather, you have to go to the edge of the platform and flip around. It takes a little bit of getting used to, as it’s easy to misjudge what direction you’ll fly in when you let go, but once you get the hang of it it’s insanely fun, and makes the game feel unique. 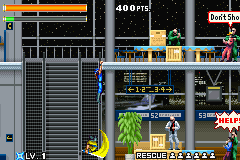 Enemies are rarely placed where they’re easy to kill, as they like to hide behind crates or attack from an unreachable platform. Flying through the air, leaping up behind these goons, and silencing them with a spinning sword flip – these are the joys of Ninja Five-O.

Visually, for the most part, there are better looking Game Boy Advance games, although the animation is very well done. Further, while there are only a few songs in the entire game, the main theme that plays in the first few levels is quite catchy. 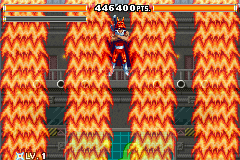 Like any decent action game, there’s a fair level of challenge beyond the first stage. As you progress through the levels, you’ll need to not only find the best way to approach enemies without getting slashed, roasted, or otherwise slaughtered, but also complete a large variety of timing-based challenges, including leaping off walls, crawling through ducts, jumping over spiked platforms, and sliding past flamethrowers. The bosses are all specialized with slightly ridiculous magic – the toad boss is especially silly – and require quite a bit of strategy and tenacity to defeat. 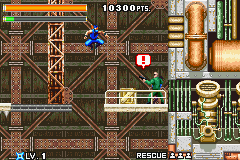 Joe can usually only take a few hits before giving up the ninja ghost, and there aren’t any midlevel checkpoints, so be sure to practice for a bit first. Still, it never reaches the upper levels of frustration of, say, Ninja Gaiden, so you don’t need to worry for the safety of your Game Boy or controller. 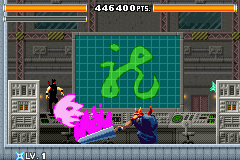 Technically these are the same age-old conventions we’ve seen thousands of times before. However, rarely are they executed so well. Although the 15 levels make for a fair amount of playing time, all one can think about after finishing them is how great it would be for more games to be like this one. 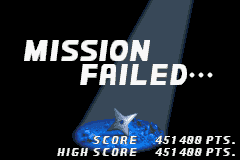 If Ninja Five-O had come out during the 16-bit era, it undoubtedly would’ve won Game of the Year awards all over the place. Unfortunately, in the casual portable gaming marketplace, where Nickelodeon games will sell better than most titles of quality, Ninja Five-O remains one of the most overlooked titles in the GBA library. Due to its rarity, obtaining a copy of either the American or European version can prove to be  expensive.