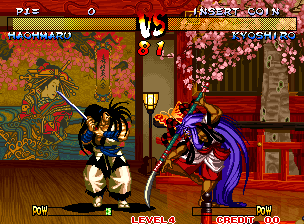 Samurai Shodown III: Blades of Blood (known as Samurai Spirits Zankurou Musouken, or “Samurai Spirits: Zankurou’s Peerless Blade” in Japan and “Fighters Swords” in Korea) reached arcades in 1995. The result is a solid game, but with a rushed feel and less polish than its predecessor. 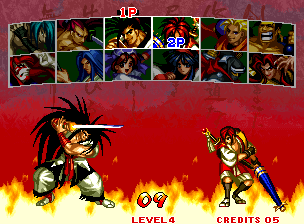 The story of Samurai Shodown III does not correlate chronologically to its place in the series. The game’s events occur in the early fall of 1788, after the first Samurai Shodown but before the second. The story describes the rampages of a legendary swordsman named Zankuro Minazuki, who is named “The Demon” for his fearsome abilities. Four new characters are introduced: Rimururu, Nakoruru’s younger sister; Basara, a vengeful ghost with a chained blade; Shizumaru Hisame, a survivor of one of Zankuro’s raids who wields an umbrella; and Gaira Caffeine, the massive grandson of Nicotine Caffeine. Amakusa Shiro Tokisada has also been made a playable character, and his new sprite looks great. Unfortunately, many older characters have been omitted, including Cham Cham, Caffeine, Sieger, Wan-Fu, Gen-An, Earthquake, Jubei and Charlotte. In other words, all of the new characters from Samurai Shodown II save for Genjuro are gone, not to return for quite a while. Additionally, many of the story scenes have been cut back, and the win quotes are all pretty brief.

Samurai Shodown III has completely redrawn graphics that are a bit more detailed – and darker – than the previous installments. It also marks the beginning of a new control scheme and a more aggressive system for the series. At the start of each match, characters are permitted freedom of movement before the battle begins. The previous twin button slash/kick input system has been abandoned in favor of a triple button slash and single kick button scheme. The trio of slash buttons are graded weak, medium and strong; pressing two buttons simultaneously to execute the powerful version is no longer a requirement. The throw command has also been transformed into a new “push-away” maneuver that disorients the enemy, leaving them vulnerable to attacks. The new ability to block while jumping ensures that anti-air attacks will no longer be absolute deterrents against airborne opponents.

When a character is selected, Samurai Shodown III allows the player to select one of three “grades.” Similar to the “Easy” and “Normal” modes seen in the Capcom Vs. series, these enable or disable various facets to make the game easier or harder. The Novice grade reduces the damage of attacks and enables auto-blocking. Intermediate grade is more or less a basic “normal” mode, while Advanced keeps the Rage Gauge at max while completely eliminating the ability to block. There’s also a sidestepping maneuver that allows the player to dodge an attack by briefly moving into the background, but this is abused and relied upon a little too much for comfort. Finally, gameplay tweaks such as high-level unblockable attacks and the ability to charge the Rage/POW meter manually permit more diversity than ever. Samurai Shodown III is also the first in the series to introduce the Bust and Slash system (known in Japanese as “Shura” and “Rasetsu,” or “Chivalry” and “Treachery”). This provides two different versions of a single character; Slash (Chivalry) represents “good” and bust (Treachery) represents “evil.” Each version possesses a different move set, although the distinction between the two is still very minor. 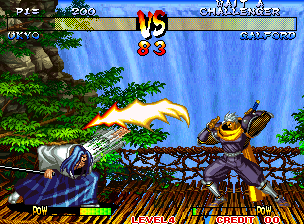 Home ports were released for the PlayStation and Saturn in 1996, although only the PlayStation version came to North America. The Sega Saturn version requires the 1MB RAM cart and is a reasonably decent conversion with only minor animation cuts, although it still suffers from some load times. The PlayStation version is awful – the speed is out of whack, the sound effects are less clear than the Saturn version, and the color palette is noticably darker. There’s no training mode, the load times are unacceptable, the sprites are even more jittery than before, and the character select screen is devoid of animation. The downgraded animations, paired with a dumbed-down difficulty level, make battles much less than impressive. The Neo Geo CD version, like most of the Neo CD ports, is nearly arcade perfect except for the load times, but also includes a few extra voice tracks on the CD with Nakoruru and Rimururu discussing the upcoming Samurai Shodown RPG. In Korea, the game is known as Fighters Swords, and renames Gaira Kafuin to Kim Ung Che. Most of the Japanese speech has been removed as well. The Wii and PlayStation 2 ports as part of the Anthology are nearly perfect, but contain brief load times before fights.

Much like the original game, Samurai Shodown III was ported and downsized to the Game Boy and retitled Netto Samurai Spirits: Zankurou Musouken. The gameplay still isn’t great, but at least all of the characters made the cut this time.