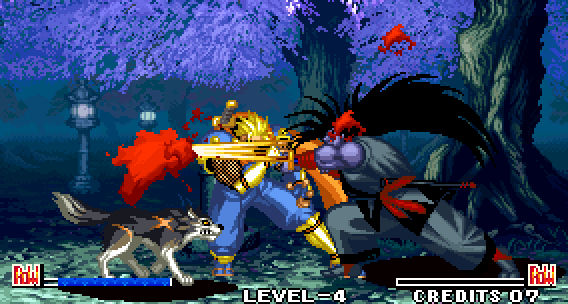 Seven years after Samurai Shodown IV, a new 2D Samurai Shodown title surfaced on the Neo Geo system. Dubbed Samurai Spirits Zero (and Samurai Shodown V in the West), it’s meant to be a prequel, and was released to Japanese arcades in 2003. This was during the period when SNK was in bankruptcy and had to (temporarily) hand over some of their properties to other companies. While The King of Fighters was handled by Eolith and Metal Slug ended up with Mega Enterprises, this Samurai Shodown title came from Yuki Enterprises (who later went on to create their own 2D fighting game series, Arcana Heart). Samurai Shodown V plays somewhat differently than the earlier titles, yet captures their unique feel. However, it’s far from perfect, and not quite the triumphant return many had hoped it would be.

Samurai Shodown V‘s plot involves the coup d’etat of the Japanese government by a demonic general named Gaoh Kyougoku Hinowanokami, who begins a rebellion to save the country. This game’s storyline operates in 1786, a whie prior to the first Samurai Shodown. This is the reasoning for its Japanese title, but was changed to Samurai Shodown V for the American release to reflect the game’s placement in the series’ release history, rather than in the plot. The American version actually skimps on the story entirely – it simply has all cutscenes and endings removed, which is really quite disappointing because the dialogue is interesting. The Xbox version tries to compensate for this with translated ending quotes, but that’s really it. 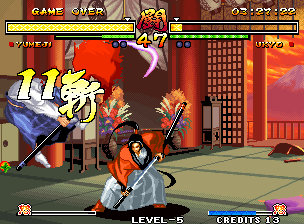 Samurai Shodown V takes a slower, more deliberate pace than the previous two games. The system resembles Samurai Shodown II, with a great emphasis on timing and carefully placed attacks, in contrast to the aggressive, combo based nature of Samurai Shodown III and IV. Also new is the Sword Gauge, which is a means of regulating attack power. The meter decreases when attacks are used, which in turn makes your strikes weaker. To regain strength, the player is required to “meditate” or withhold their attacks. The control system has been changed up once again: A is a weak attack, B is a medium attack, and pressing both is a strong attack. The C button is for kicks, and the D buttons executes several defensive maneuvers, such as rolls, dodges, and quick jumps. Pressing C and D at the same time results in an attack that shoves your opponent and prevents them from blocking. Also new to the system is the Concentration One system. By activating a command when you’re low on health, your character slows down time Matrix-style and can inflict massive damage on the enemy for a comeback. It’s useful and easily abused, but after playing the game for awhile, it becomes predictable. Finally, the character specific fatalities from Samurai Shodown IV have been removed.

Samurai Shodown V has perhaps the most vibrant graphics seen up to this to point in the 2D titles and boasts a rather large roster of 24 characters. However, not many of these characters are actually “new.” Since the “bust/slash” system has been eliminated, many are simply the “evil” versions of existing characters that have been given slightly redesigned sprites. (Rasetsumaru is a demonic Haohmaru, Rera is a dark version of Nakoruru that attacks with a Galford-style wolf instead of an eagle, etc.) The brand new characters include include Yoshitora, a samurai who fights with seven swords; Mina, a white haired girl who wields a bow and arrows; Kusaregedo, a gigantic, gross monster who takes up half the screen; Yunfei, an elderly swordsman; Yumeji, a clone of Ukyo who can shapeshift briefly into other characters, and Sankuro, an annoying bastard of a character with a huge hammer. Some of these new characters were designed by Nobuhiro Watsuki, the artist who created Rurouni Kenshin, who is a big Samurai Shodown fan. The final boss this time is Gaoh, who can transforms into a demon. In the American version, he morphs mid-battle, while in the Japanese version, he transforms for the second round, and the battle is fought on a different background, similar to the Amakusa battle in the first game. This change is due to the lack of story scenes in the American version. 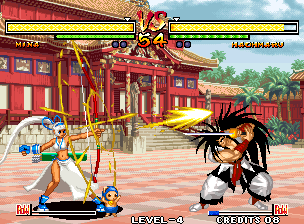 With all of these characters, Samurai Shodown V is hampered by a severe case of character imbalance, and this is where the game really falters. Some new characters such as Yoshitora and Mina are pure devils and can dole out damage without much fear of retaliation. Then there’s Sankuro, who’s a total ass. He mimics Genjuro, but with a twist: he has three henchmen at his disposal, who cannot be harmed. One can drop out of nowhere and inflict huge damage, the second trips you up, and the third freezes you in place while Sankuro runs away and eats sushi to regain strength (the most annoying of the bunch). Yumeji is also kind of a pain, although not as bad – but whenever she shapeshifts between characters, she’s momentarily invincible, which is pretty cheap.

Overall, Samurai Shodown V is a step in the right direction, with great music, colorful graphics and interesting storyline. On the downside, the botched character balance and cheap system additions do little to improve the game.

Ports of Samurai Shodown V were released on PlayStation 2 in Japan and Europe, and on the Xbox in America. The PlayStation 2 version features some really obnoxious load times, which are on par with the 32-bit Saturn games. It plays almost perfectly, though, and even features a new arranged soundtrack. The Xbox version shortens the load times drastically, although there’s a bit of noticeable screen tearing during the cutscenes due to resolution discrepancies. The Xbox version also includes online play, which is nice. Strangely enough, a completely new English announcer was added to this version, bu you can switch to the original voices by going into the Xbox system settings and changing the language to Japanese. 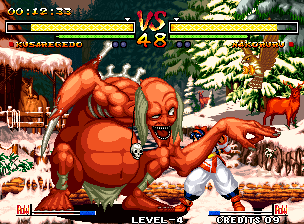 There were some really stupid oversights though: even though the option screen gives you the choice of Original and Arrange soundtracks, it will only ever play the Arrange versions. Additionally, the manual indicates that there was a secret code to unlock all the bosses that were used in Samurai Shodown V Special, but this was an unfortunate misprint. The Xbox version also censors Rasetsumaru’s ending, which originally featured a decapitation. Finally, with the balance issues prevalent all over this game, you’d assume SNK would skip this game, or least package it with its patched upgrade, Samurai Shodown V Special; but alas, gamers must be hoodwinked again. The versions featured on the Anthology are basically the same as the original PS2 release, although they use a generic loading screen instead of the artwork portraits.