While King of Fighters ’96‘s rushed production resulted in a fun but very unbalanced game, SNK didn’t hesitate to add even more content to The King of Fighters ’97. Without having to draw completely new sprites for the characters like with the previous year’s game, they were free to focus on adding more moves and animation to the already existing cast. The roster loses Vice, Mature, Geese, Wolfgang Krauser, Kasumi Todoh and Mr. Big, but gains Billy Kane, Blue Mary, and Ryuji Yamazaki from Fatal Fury and Fatal Fury 3: Road to the Final Victory. The surviving boss from ’96, Chizuru Kagura, is also added to the regular roster along with with four original characters: Chris, Yashiro Nanakase, Shermie, and Shingo Yabuki. Shingo is something of a joke character: a guy who idolizes Kyo Kusanagi and his fighting style. At the same time, he’s actually fairly powerful and a lot of fun to play as. His gimmick being that his moves are similar to Kyo’s but without the magical flames and super powers he just hits really hard. 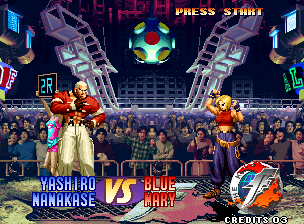 Chris, Yashiro and Shermie are a new team of characters from the same clan as Goenitz. Chris focuses on lots of aerial kick attacks and combos, while Yashiro focuses on pure power. You would think Shermie would then fall into the weak but agile stereotype to complement the other two characters, but she’s actually a fast grappler with some pretty powerful moves. The new characters are all a deliberate mechanical shift compared to other fighting games, as none of them actually have projectile attacks at all. After all of the game changing alterations to King of Fighters ’96, it was smart of SNK continue to embrace its uniqueness by adding characters that generally focus on getting up close to their opponents quickly to keep the aggressive feel they nailed with that game. 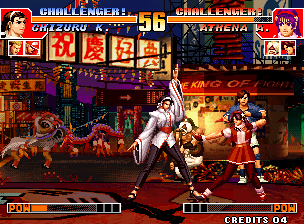 SNK also once again has a good balance here between injecting bits of story and character information into the game without it interfering with the game proper. It’s good to see them not going back to things like the unselectable teams in King of Fighters ’94 or the drastically reduced roster size in Samurai Shodown 3 for the sake of the plot. They also get a lot of mileage out of the sprites for Chris, Yashiro and Shermie by using versions of them as bosses at the end of the game. The cool thing is that instead of just reusing the sprites verbatim, the boss versions of the characters have completely different special moves, voice acting and new animations even for things they didn’t need to change like a character’s standing animation. Iori Yagami and Leona receive similar treatment, appearing towards the end of the game as possessed maniac versions of themselves with new sprites, moves and voice overs. All of these bosses even have their own theme song separate from the regular versions of the characters. 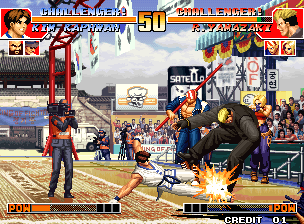 The big change to the mechanics here is that you can actually choose a style, a concept inherited from Samurai Shodown III, though it doesn’t work the same way in execution as the Bust/Slash designations from that game. Before selecting your characters, you’re given the option to choose either “Extra” or “Advanced” mode. Extra is similar to King of Fighters ’94 and ’95, as it’s more suited towards defensive play as you get only one power gauge like in those games and cannot run. You can instead sidestep to avoid incoming attacks. You can also perform unlimited super moves when your energy is low. Advanced mode gives you the evasive roll introduced in King of Fighters ’96, and lets you store up to three full power gauges at once. This lets you choose whether or not you want to expend one to get a damage boost instead of it happening automatically. It also lets you use more than one to do an even more powerful version of your super moves instead of having to wait until your life is low. You can also expend a gauge to quick roll out of an attack after successfully blocking it, letting quickly get the drop on your enemy. The rest of ’96’s mechanics like being able to hop a short distance instead of jumping also make a return here. 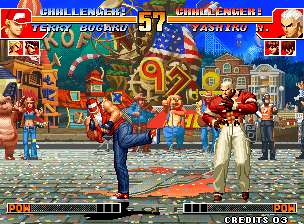 The characters’ relationships to each other also has a bigger effect on the game, as when a member of your team is defeated, your power gauge will be carried over to the next character, dropped back to zero, or even get a bonus depending on how much your teammates like each other. Fortunately, you don’t have to follow the past three games’ storylines to know who gets along with who, as on the character select screen you can bring up an icon over each characters’ portrait to show their preference for the character you currently have selected. 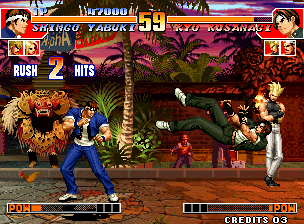 All of these changes are great, but again come at the cost of the game’s balance. As SNK rushes to pack in as much new content as possible, we find that, similar to (though not nearly as bad as) King of Fighters ’96, things aren’t as balanced as they could be. The controls are actually much more responsive than in any previous installment though. It’s a welcome improvement that isn’t as noticeable when playing with an original Neo Geo stick, but makes a night and day difference on all of the ports as pulling off combos and cancelling moves now comes much more naturally. 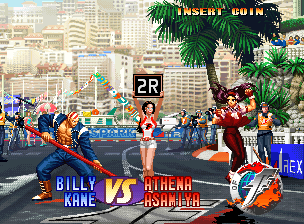 King of Fighters ’97 has a very strong soundtrack like it’s predecessor, though several tracks are reused from previous installments as well as from Real Bout Fatal Fury Special. That said, the real flaw with the game’s music is that you probably won’t hear much of it. In King of Fighters ’97 music only plays when the team’s “leader” is currently fighting. The rest of the time each background has a track of appropriate diagetic audio. These ambient tracks are good, but a poor substitute for the already great music SNK has composed for the series so far. It’s also a weird choice since, due to the speed of each match, you barely get to hear any of the character’s themes. Given the lower number of stages in this game, it might have been smarter to ditch the team themes completely and make a completely ambient soundtrack instead with more variety between rounds. 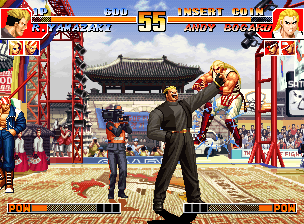 Like the previous game, KoF ’97 made it to PlayStation and Saturn, with the Saturn version once again taking advantage of the 1 MB RAM cart to reduce load times. It also appears on the King of Fighters Orochi Collection. The Japanese version includes a few extra ending pictures for the edit teams, which are shout-outs to various Japanese gaming magazines. 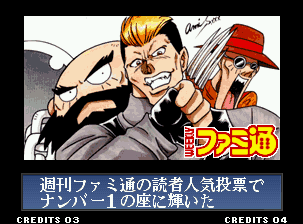 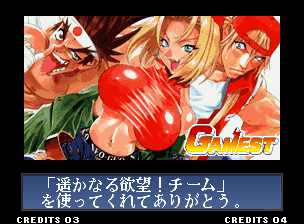 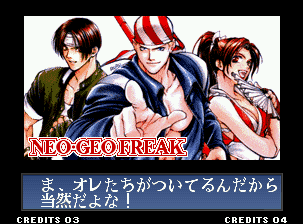 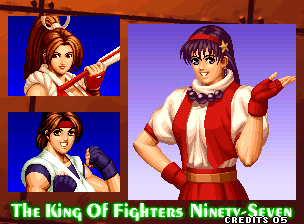 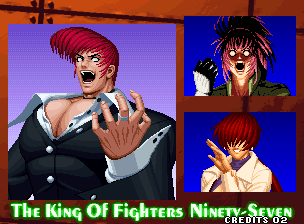 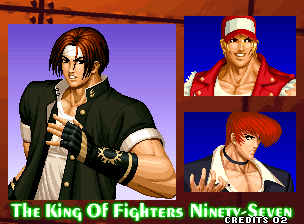