After the success of the legendary Fatal Fury, the Neo Geo became almost exclusively the home of 2D fighters. SNK’s most popular non-fighting game during this time was Metal Slug, a side-scrolling action game not unlike Konami’s Contra. Compared to the 80s action movie commandos of that series, Metal Slug is a much more cartoonish take on war, combining gorgeous animated sprite artwork with dark comedy violence. 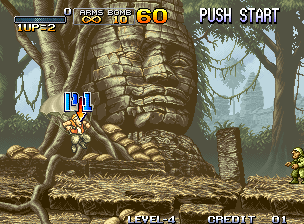 Like most SNK games, Metal Slug has a whole backstory which is almost never communicated in the games – most of them don’t even have proper intros. The gist involves two military groups, the Regular Army and the Rebellion – who are at war with other. General Morden, a high ranking official in the Regular Army, defects to the Rebellion, and brings them closer to victory. Only our heroes, part of the Peregrine Falcon division, can stop him. The series later gets more ridiculous with aliens and robots and supernatural beings and creatures living beneath the earth’s crust. In the first game, player one controls Marco and player two controls Tarma. From the second game onward, any player can pick from one of four characters. They’re almost all identical, up until Metal Slug 6, which bestowed unique abilities to each character.

The hero and main character of Metal Slug. He’s an American soldier from the heartland, whose full name is Marchrius Dennis Rossi.

The second player in the original Metal Slug. He’s a Japanese soldier, despite having the bizarre full name of Tarmicle Roming III.

A “megane” girl is characters who is fetishized for wearing glasses. Fio, an Italian soldiers whose full name is Fiolina, fits into this role nicely. Made her first appearance in Metal Slug 2.

Eri is the other female character, although not as popular. As her name might hint, she’s of Japanese descent. Also made her in debut in Metal Slug 2.

A model-turned-soldier from France. Only appears in Metal Slug 4.

Since Metal Slug 4 was made by a Korean team, it’d make sense that they’d stick in someone of Korean heritage, despite the Western-sounding name. Also only appears in Metal Slug 4.

The Ikari Warriors made their trip into the series in Metal Slug 6. Ralf is tough enough to survive nukes, if his KoF 99 win quotes are to be believed, and his Vulcan Punch can tear through tanks.

Clark, the other Ikari Warrior, is more of a grappler, and can pound foes right into the ground with his Super Argentine Backbreaker. 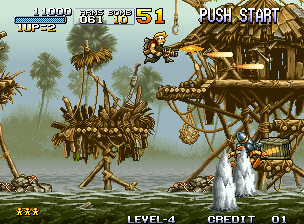 There are also a handful of other secondary characters. General Morden is an evil general who causes a ton of trouble for the Peregrine Falcons, although him and his crew later join to help fight off the Mars People, a group of aliens that seek to rule the planet Earth. Sgt. Allen O’Neill is a bald-headed buffed marine soldier wielding a Gatling gun – he’s a huge pain, but his tagline whenever you kill him is “See You in Hell!” Despite his multiple deaths, he shows up in later games perfectly healthy. 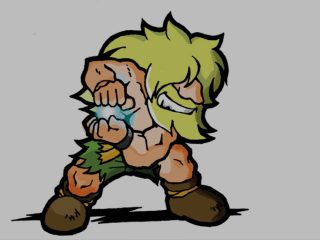 Among all of the scruffy bearded hostages you find, sometimes you’ll find one that follows you and will continue you Hadoken bad guys for a certain amount of time. This guy’s name is Hyakutaro Ichimonji, and other than his amazing powers, he looks identical to the other hostages. On occasion, you’ll stumble upon Rumi Aikawa, a backpacking allied agent who will drop food and other items. Some of the portable games also feature exclusive playable characters, such as Gimlet and Red Eye in Metal Slug: 2nd Mission for the Neo Geo Pocket Color, and Walter and Tyra in Metal Slug Advance for the Game boy Advance. Certain home versions also have female drill instructors which seem pretty popular with artists but don’t actually appear anywhere in the game.

Compared to Contra, Metal Slug is a bit slower and more deliberate – they actually only run at 30 FPS, compared to the 60 FPS of most 2D side-scrollers – but avoids the memorization/pattern based sequences that took over Konami’s series in the later home installments. Since most of them were created as arcade games, they’re not exactly “fair”, and you’ll usually find yourself dying quite often, especially since the action is brimming with absolute chaos – the screens are routinely filled with enemy soldiers coming from directions, gigantic machinations launching hellfire straight at you, and random explosions causing untold amounts of debris to fly everywhere. The gameplay itself also seems to take some small inspiration from Shinobi, because you can run into most enemies without dying, allowing you to sneak in melee attacks if you get close. Sometimes this is the only way to get past foes with otherwise impassable shields. 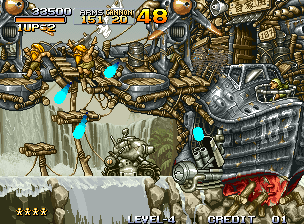 Although you’re equipped with a pistol as a main weapon, you can also pick up tons of weapon power-ups, which are sometimes given by rescued hostages. Some of these include the Heavy Machine Gun (self explanatory), a Rocket Launcher (jokingly dubbed “Rocket Lawnchair” due to the way the announcer pronounces it in later games), a Shotgun (literally disintegrates bad guys), Flame Shot (tons of fun), Enemy Chaser (homing missiles), Drop Shot (fire bouncing balls), and the Iron Lizard (which sends little robotic exploding lizards flying across ground.) All of these have limited ammo, but since you lose your weapon when you get killed, and you can usually only take one hit, it’s to your advantage to go wild. You also have a limited supply of grenades which can be used to toss over obstacles or attack heavily armored foes – these are restored whenever you begin a new life, which makes them extraordinarily valuable in boss fights.

The titular “Metal Slug” is a huge tank with an aimable vulcan cannon and limited number of artillery shells, and are obviously patterned after the police tanks from Masamune Shirow’s manga Dominion Tank Police. Although they are relatively rare, you can climb in on whenever you find out and blow up as much as possible, at least until the tank is destroyed. It lets you run over soldiers, over cars, over just about anything since its treads are made out of some kind of future rubber. The way you can catch the edge of a platform and still roll up onto it is awesome. It also has a rapid fire heavy machine gun that never runs out of ammunition along with the high powered shells you can use to level enemy vehicles with it. Later games introduced other “slugs”, which are just different kinds of vehicles, ranging from airplanes to submarines to two-legged mechas and other bizarre things to ride on and shoot more bad guys with. There’s a great variety of enemy hardware to contend with, ranging from assortments of tanks and mobile cannons, all of which are gigantic, beautifully animated, and fun to destroy. 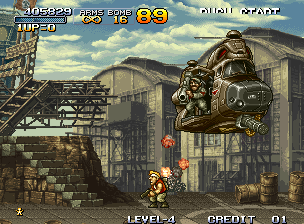 Despite the excessive amount of carnage, Metal Slug never takes itself seriously. Enemy soldiers are usually portrayed as lazy peons who are really just doing their jobs, and it’s often you’ll crash their camp-outs and lunch parties with a well-timed grenade. Even the death sequences, for both your characters and the enemies, are pretty amusing, especially when you set them on fire. Some of them throw up their arms and run in the opposite direction from the sight of your one-or-two man/woman army. Even the main boss, an amalgamation of every evil dictator ever seen, can later be found captured by aliens and unceremoniously stripped to his boxers, buried in tears.

The beautiful animation brings the entire game world to life, which is punctuated by perfect sound effects and amazing voicework, in the form of hilarious screams and one of the coolest announcers in video game history. The guy who proclaims “MISSION ONE START!” when you begin a mission, or “HEAVY MACHINE GUN!” when you pick an item, or “THANK YOU” when you rescue a hostage, seems to be running a competition with the Soul Calibur announcer for The Most Bombastic Voiceover in Existence, and it’s all the more awesome because of it. The music is very distinctive, with a “Metal Theme” working as a recurring motif in many songs, usually remixed in the first stage or in the final moments right before the end. The Mission Complete theme ranks up next to Contra as one of the most recognizable in the industry. 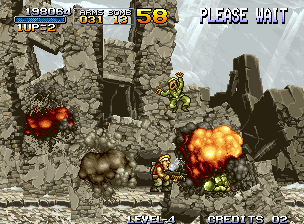 The original games were created by a team called Nazca, which had previously worked with Irem on games like In the Hunt and Gun Force 2. Later, they were assembled into SNK, and have continued to turn Metal Slug into one of SNK’s most popular – and prolific – series. SNK published the original Neo Geo game in 1996.

SNK published the first Metal Slug for the Neo Geo in 1996. You go through six missions of ass kicking, shooting/rolling over/immolating your way to victory. The game starts in a jungle, with various ruins in the background, before moving off to the European front, where cross rivers, raid a small city, and climb frozen mountains. One of the key moments takes place where you completely demolish a large house, sending bits of bricks and mortar (and enemy soldiers) flying all around the screen. There are also two endings, depending on whether you’re playing with one or two players. The game’s controls, level design, graphics and sound merge together flawlessly for one of the best gaming experiences around. 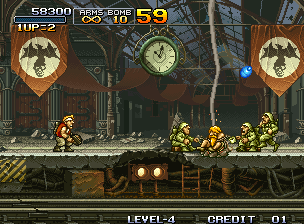 Of course, with so many sequels, it raises the question of where this first entry fits as far as quality. It certainly doesn’t have as many features as later games (only two playable characters, only one type of Slug), but the foundations are solid and it’s still a blast to play. Plus, every subsequent game slowly got more loopy as to supernatural and science fiction concepts, so this one is the most down to earth, relatively speaking, since it just focuses on the war between human characters.

After its initial arcade release, it was also ported to the PlayStation, Neo Geo CD and Saturn. The PlayStation version has missing animation and even stops the action midway through each level to load, making it less than ideal. The Saturn version requires the 1 MB RAM cart, so it keeps almost all of the animation and sounds, and eliminates most of the loading, other than some minor waits between levels. In these versions, you’re given five credits, and can continue where you left off until you run out. All of these have cut loading scenes with a monkey juggling grenades.

These versions include a “Combat School” option, where you replay various stages of the game under various conditions (such as: “complete as fast as you can” and “don’t die”.) Your instructor is a cute woman named Sofia, who shows off a lot of concept artwork in the gallery, despite not being anywhere in the actual game other than the Combat School. Most of the music in the CD versions is exactly the same as the cartridge, via streaming audio, except the two-player ending song has been rearranged to add vocals. The PlayStation version also features an additional “Another Story” mode, which is another collection of four mini-games (with alternative versions as unlockables) wherein you aid a prisoner to escape for an enemy encampment. Like many Neo Geo games, the amount of blood depends on the regional setting, spurting red on Japanese systems and white on American ones.