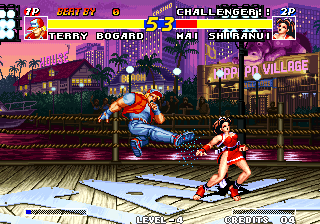 Fatal Fury 3 had potential, but it never quite fulfilled it. Real Bout Fatal Fury is everything that its predecessor could and should have been, and more. Every character from Fatal Fury 3, bosses and all, has been brought back and made playable. Three more characters from previous installments – Kim Kaphwan, Billy Kane, and Duck King – also return for a total of sixteen playable characters. The plot again concerns the King of Fighters tournament. At the end of Fatal Fury 3, Geese was able to obtain the magical artifacts, but they were destroyed by the Jin twins. So shortly thereafter, he stages another KoF tournament. The events of the game are best remembered for ending with the death of Geese Howard after he refuses to get saved by Terry Bogard.

Instead of using four attack buttons, the D button is strictly for plane switching. A punches and B kicks, but the C button executes a nebulous “power” attack. This can either be a strong punch or kick, depending on the character and situation. It takes a bit getting used to, as it makes executing special moves somewhat confusing. For instance, with Terry, a QCB+Punch executes the Burn Knuckle, while a QBC+Kick executes a Crack Shoot. QCB+Strong is more powerful Burn Knuckle, which means there’s no way to do a stronger Crack Shoot. Weird. 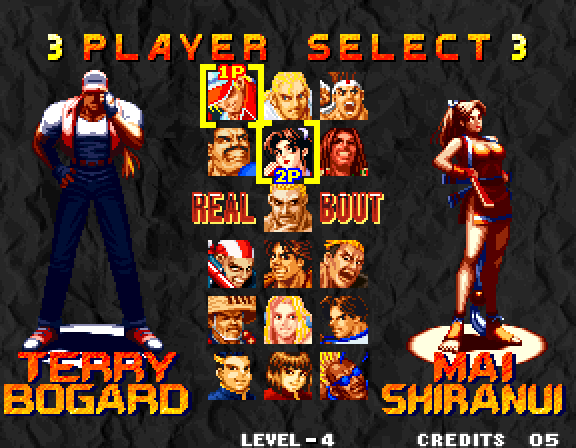 All of Fatal Fury 3‘s techniques have been retained in some form or other, with a few changes that make a world of difference to the game’s quality. At the bottom of the screen is a super meter that starts to deplete gradually as soon as it is maxed out. The character can perform as many S. Power Supers as desired until it’s completely depleted. Desperation moves have technically been removed, but if the health bar begins flashing with the super meter maxed out, a P. Power Super can be performed, which is generally a more powerful variation of the standard super. These completely deplete the super meter at once. After the super meter reaches its halfway point, it enables H. Power, which allows to perform “Break Shots.” Break Shots are specials and supers that can be guard cancelled into. Finishes have been changed to Knockout Finishes, which are identical except they only knock the opponent toward the screen. Combatants can also recover quicker from a knockdown by pushing the D button after a fall.

In every arena other than Geese Tower, it is possible to destroy the side of the stage. All walls can be damaged when a character is knocked against them (whether or not they block), or by attacks that miss the opponent and collide with a wall. Any damage to walls is retained after each round. When a wall is destroyed, it reveals an out of bounds area. If a fighter is knocked into it, they’ll lose by a ring out, similar to Virtua Fighter. Some of these ring outs are pretty funny. In the subway stage, the combatants can be knocked onto a train, which then departs, spiriting them away from the fighting ground. In the museum stage the destination is an elevator, which then carries the losers upward as they hop furiously. When Blue Mary is knocked into the water in the docks level under the right conditions, she’ll surface without her top, which is one of the very few instances of actual nudity in an SNK game.

Other than introducing a multitude of techniques and upping the size of its character roster, what really makes Real Bout so much better than Fatal Fury 3, and so fantastic in general, is in the overall feel of the game. For starters, it’s faster and much more combo-oriented than any previous game in the series. Fatal Fury 3 relied mostly on canned combos, but in Real Bout, the system is much more free form. In fact, it’s extensive enough that there’s a great deal of room for improvement for anybody determined to master it. Most importantly, its physics are more intuitive. The damage has also been rebalanced so fights now last a bit longer. Combined with its speed and impeccable-as-always controls, it all makes for an excellent game.

Most of the character sprites are identical to those from Fatal Fury 3, but everything else about the graphics has been significantly improved. SNK’s sprite artists were working with much brighter palettes this time and the result is significantly more colorful than its predecessors. There are only five different stages, but their designs are immensely better than in any prior Fatal Fury game and are easily comparable to what SNK was doing with Samurai Shodown at that point. Besides just having gorgeous graphics, an amazing level of attention has been paid to detail in its animations. The moves have been made way flashier to the point that the Real Bout games are among the flashiest fighting games ever made. Musically, Real Bout retains Fatal Fury 3‘s compositions and has a few originals that are just as great. 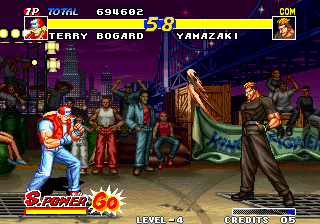 Around the time of its release, Real Bout Fatal Fury was ported to Neo Geo CD, PlayStation, and Saturn. The NGCD port is nearly flawless, but has the expected problematic loading times. The PlayStation version was released in Japan and Europe, and was advertised for release in America, but never made it over. It’s also inferior to the Saturn version, which utilizes the 1MB RAM cart this time, and is a much better port than Fatal Fury 3. There are still some load times, and the sound effects are still scratchy, but it’s definitely a step up. There’s a release for PlayStation 2 as part of the compilation Fatal Fury Battle Archives 2, which is basically arcade perfect. The Japanese version has Blue Mary’s wardrobe malfunction removed, while the American version is censored for blood, just like the arcade original back in 1995.