When The King of Fighters ’96 was released, it made a pretty big impact. Besides some major changes to how the game plays, almost all of the characters have been completely redrawn and reanimated from the ground up. Several new playable characters have been added to the roster as well compared to the three in KoF’95. The most notable addition is Heidern’s replacement, Leona, although she’s brutally overpowered here and had to be toned down for later games. Another fan favorite is the Boss Team, consisting of Geese Howard (Fatal Fury), Wolfgang Krauser (Fatal Fury 2) and Mr. Big (Art of Fighting). Kasumi Todoh from Art of Fighting 3 makes an appearance here as well. 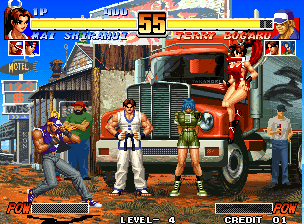 Four more original characters debut in this game: The two bosses, Goenitz and Chizuru Kagura, as well as Iori’s new teammates, Vice and Mature. The first two are typical of SNK fighting game bosses, being extremely frustrating to fight against. The latter two, Vice and Mature, became very popular. Vice, despite her slim frame and formal dress, is a berserk grappler. Mature, on the other hand, is much faster and has a variety of “blade” like attacks similar to Leona and Goenitz as well as a super move stolen from Rugal Bernstein (fitting as Vice and Mature appeared in previous King of Fighters games under the guise of being Rugal’s assistants). Oddly, Vice and Mature’s design seems to have been inspired by The Human League. 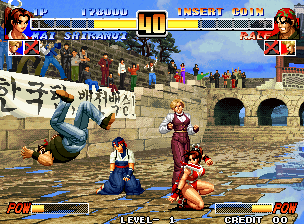 This is also the first game to replace the sidestep found in King of Fighters ’94 and ’95 with an evasive roll, another technique that would become a series mainstay. It drastically changes the way the game is played, as you can use this to roll through an oncoming projectile or to quickly get behind an enemy while they’re recovering from a move. You can also tap forward twice to quickly run across the screen instead of hopping a set distance. 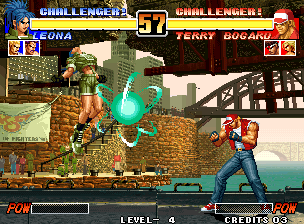 The biggest game changer, however, is how jumping works. Now, every character in the game has a unique jumping speed, height and distance depending on if you tap or press the joystick to jump, as well as if your character was walking or running before jumping. This and the new evasive roll are the things that have come to define KoF games and really give them a completely unique feel. It really can’t be oversaturated how much more aggressive and relentless this game feels to play compared to most other fighting games from 1996. 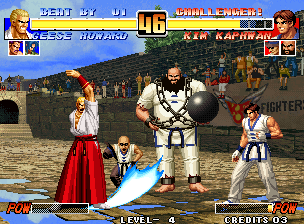 Besides being redrawn, most of the returning cast has had some drastic changes to how their special moves work. The big change here is how many characters who were almost clones of each other in ’94 and ’95 now finally have enough unique moves and abilities to stand out. An impressive feat for a game that has twenty-seven playable characters (compared to contemporaries like X-Men vs. Street Fighter or Ultimate Mortal Kombat 3). While this was accomplished with subtle changes to damage levels and characters receiving more unique normal attacks, the change that really stands out is how projectiles work. In the past two King of Fighters games, projectiles were fairly standard – you perform a motion on the controller and the character shoots a ball of energy out of their hands that flies across the screen (or along the ground). Here, however, things are completely different. Some projectiles are gigantic but take a long time to execute, some do significant damage but have a shorter recovery time, some have a hit box that grows slightly the farther the projectile travels… there’s a great variety both visually as well as mechanically. More characters have special attacks they can perform while jumping as well, though you can now actually block these aerial attacks as well as other projectiles while jumping yourself. 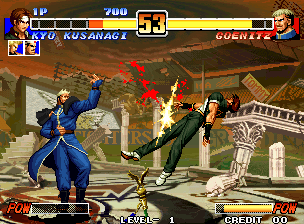 Another concept typical of fighting games is that if you attack a character as they’re starting a special move of their own, your attack “counters” theirs and you get rewarded by doing a little more damage than normal. A cool addition here is that if you counter your opponent with a special move instead of a normal attack, you can then continue to juggle the enemy in the air for even more damage. The timing for this is made less stringent when your gauge is full as well, giving an incentive to not immediately expend it all to perform one super move. A few more techniques have been added to the game to let you play with getting a good counter in as well. The most important is that some moves can be canceled by hitting all four buttons. This lets you fake out an opponent. You can also, while blocking an attack, quickly cancel the blocking animation and roll out of the attack at the expense of your power gauge. 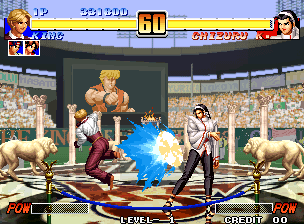 Similar to the past two installments, you can call one of your teammates out to help you evade certain attacks or protect you while you’re dazed. However, here, the series’ storyline is taken into account as there’s a chance characters will not, or will never help you if they are canonically rivals or otherwise ambivalent to each other. It’s an interesting decision as while it makes little sense to have the game’s story effect how the actual fights control, this feature is so rarely used that it’s barely noticeable. It’s a nice contrast from previous SNK games where the roster and mechanics would often feel unnecessarily held back due to the game’s plot like in Art of Fighting or Samurai Shodown III. The game also has several specific introductory animations for various characters, which is great for revealing bits of character development without slowing down the game’s fast pace or interfering with the fighting itself. In general, with King of Fighters ’96 SNK successfully finds that sweet spot of bringing a lot of personality to the table without it being at the expense of the game’s mechanics. 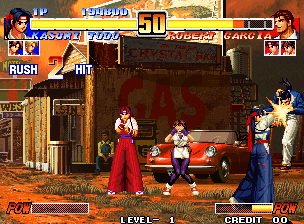 The story itself is actually fairly simple, with each team having some unique dialogue before the final fights against Chizuru and Goenitz along with an epilogue unique to each team. The main development is that we find out that Goenitz is the person that turned the previous games’ villain, Rugal, into a super powered maniac. We also learn that Vice, Mature, Goenitz, and Leona are all distant relatives. This is handled in a cool way because some of their moves are cosmetically similar, even if they play nothing alike each other. 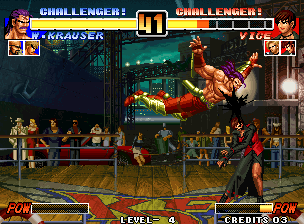 King of Fighters ’96 also has one of the more highly regarded soundtracks in the series. Several iconic songs like Kyo and Iori’s themes made their first appearance here. Many songs from this game return as optional themes even in much newer installments like The King of Fighters XIII. This was also the year SNK began really capitalizing on their musical prowess, re-releasing several of their previous games soundtracks as well as “drama CDs” for many of their games, where the game’s voice actors would reenact important moments in the series storyline. 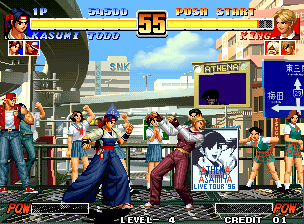 This sudden burst of interest in SNK’s characters and the background information of the games was a good thing for them, as while The King of Fighters ’96 has a tremendous presentation for its time and is extremely ambitious, it’s also very unbalanced to actually play. Some characters have a massive advantage over others due to having very little recovery time after performing their moves, while others simply deal way too much damage compared to the rest. Every fighting game has a few questionable balance situations that make it to the final release, but with The King of Fighters ’96 you can tell that most of these issues slipped out because the team was busy implementing so many new features without paying as much attention to the fundamentals of the game. This allows for the player to do things like have Iori Yagami perform a single infinite combo on an opponent once they’re in a corner without too much trouble, or for new characters like Leona to be almost untouchable because of how fast their attacks come out. 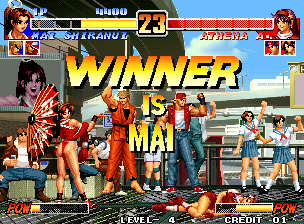 Despite that, The King of Fighters ’96 is worth checking out even today. It has the great backgrounds and fast action SNK fighters have become known for. The presentation and character variety also stands the test of time. It’s also a nice time capsule of all the changes SNK made to the series to make it stand out not just among their own games but among fighting games in general.

While it was ported to both the PlayStation and Saturn, the former was once again saddled with cut animation and load times, while the latter used the 1 MB RAM cart. While both ports still have plenty of loading, it’s much shorter and very little animation is sacrificed. The sound quality is still noticeably downgraded, though the arrange soundtrack makes up for it. For the Neo Geo CD there was a bonus disc available, called The King of Fighters ’96 Neo Geo Collection, which contains an extensive database of the characters and other supplemental material. The game also appears on The King of Fighters Orochi Collection. 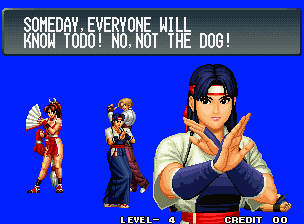 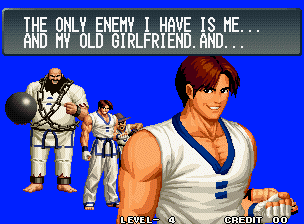 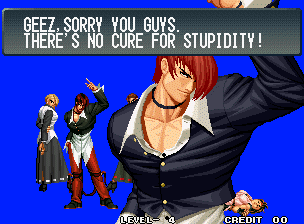