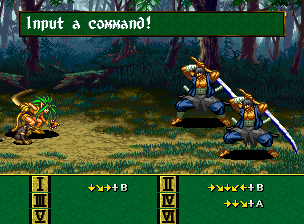 Nicknamed “Samurai Shodown RPG” by the English fans (and known under the fan translated subtitle Tales of the Bushido), this title is exactly what it sounds like. Samurai Shodown has plenty of backstory, and makes for a brilliant tale.

The gameplay is pretty much Final Fantasy with a Samurai Shodown twist. Characters represented by resized sprites from the main series perform RPG-style actions on opponents you encounter in random battles. There are basic attacks, magic, and special attacks, which can be upgraded as the game progresses. Even the Rage gauge has been implemented into the system: as you take damage, your character gets angry and starts inflicting more damage on the foes. There’s also the obligatory “wait-for-your-turn” meter based on your character’s speed stat, and various commands for items and the like. There’s also a choice to use the fighting game notations to perform moves, which is novel for a while, but grows tiresome rather quickly.

There are several selectable main characters: Haohmaru, Nakoruru, Cham Cham, Ukyo, and Galford. They each follow different storylines, but generally all meet up at the same point. After choosing your character, you can pick whether to pursue a plot with Amakusa (resembling the first game’s storyline) or Mizuki (the second). Having to play through the game with each character twice to see everything the game has to offer naturally gives the game a lot of replay value. And then there’s the characters themselves. Like any good RPG, there is an assortment of character varieties, from the simply powerful (Haohmaru and Genjuro), to the speedy and magic-intensive (Nakoruru), the everyman (Galford), and the overpowered (Ukyo). Each character even has affinities for different elements: Haohmaru is Wind elemental, Galford is Lightning, Rimururu is Ice, etc. 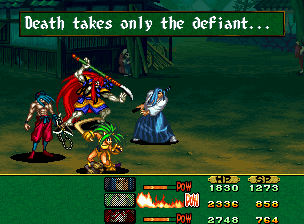 You aren’t just restricted to the main characters, either. Fairly early on you can join up with other members of the Samurai Shodown crew, from Charlotte to Kyoshiro. There’s also an original character, a sexually ambiguous ninja named Shippu no Reon. Like the main characters, each character has their own attributes and elements, making for some really diverse teams. The sole exception is Genjuro, who travels alone – which isn’t much of a surprise, but you’d figure they’d make him more powerful since he fights alone throughout both scenarios. (He’s stronger and faster than Haohmaru, but still slower than Ukyo, who has great techniques and a crew in tow). You also have your typical side quests that can be completed for rewards, and often involve other characters like Jubei and Basara.

The graphics are clean and surprisingly detailed. Since the game uses downsized sprites from the main series, everyone’s attacks are almost exactly how you remember them (which has the added bonus of making the fight cutscene look especially cool). The music is alright – it’s very Japanese and captures the vibe for each area of the game. 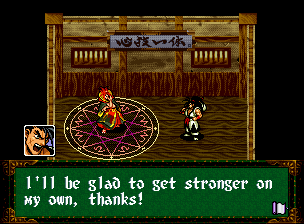 The biggest problem is, of course, the load times. They’re infuriating in the Neo CD release, often taking up to thirty seconds – and while the PlayStation and Saturn versions are quite a bit faster, they’re still pretty sluggish. There are other minor differences between the three releases – the Neo CD version generally has smoother animation, while the PlayStation version has slightly better sound. All three versions contain some unique storyline segments, too. The Neo Geo CD version has a mini-chapter starring Hisame Shizumaru as you bump into characters from other SNK games. The PlayStation version version includes some added cutscenes revolving around some of the secondary characters. The Saturn version has an “Interview Mode,” where you can learn about different characters.

Despite its quality, the Samurai Shodown RPG was never translated for an American release. A fan translation (from which the screenshots on this page are taken) has once been in the works, but was never completed/released.