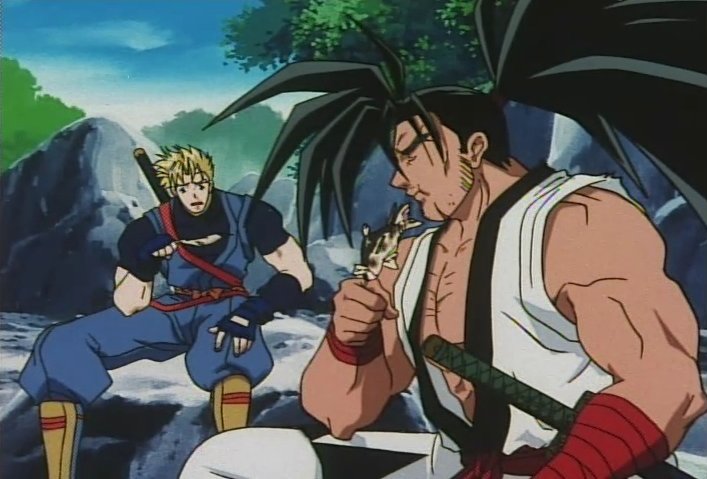 Samurai Shodown: The Motion Picture was released in Japan during the height of its popularity. This happened with a lot of video games during this time period – sometimes we gamers got a good product out of the deal, like Street Fighter II (well, debatable on who you ask), but most of these ties-ins fall under the same contemptible umbrella as most Disney sequels that go straight to DVD, led by a bunch of buffoons who storm in and tear the original concept to pieces, and are only out to make a quick buck.

Samurai Shodown starts out strangely enough – there’s this talk about evil arising over Japan, and then suddenly Haohmaru and Amakusa face off for some reason. Besides the abrupt nature of this conflict, what’s even more strange is that Amakusa has been turned into a female, which baffles me as the original Christian heretic design is now lost entirely. This is fine for people ignorant of the story, but a total failure for older fans. In another surprise twist, she now uses a sword instead of her floating ball thing.

Then the rest of the cast members appear from nowhere, Power Rangers-style. Tam Tam, Wan Fu, Galford, Charlotte and Nakoruru, along with Haohmaru, comprise the team of six holy warriors from around the globe to defeat evil. Unfortunately, here they’re all killed, but don’t worry: 100 years later, they’re reincarnated, and eventually band back together to stop Amakusa once again. Haohmaru, for some reason, doesn’t recall his former life, until Earthquake shows up to terrorize the village under orders of Amakusa. This prompts Haohmaru to go into Rage mode, just like the game. It’s incredibly cheesy, as the gameplay gimmick was just that – a gimmick, not something to be taken seriously in an animation.

Then it all boils down to the good guys teaming up for the last battle. It’s strange that, despite the popularity of Nakoruru, she remains relegated to the background, with Haohmaru and Charlotte taking on the role of the protagonists. All of the characters show up at some point or another – Hanzo drives the plot forward with exposition, Jubei and Kyoshiro are just kind of there, and the heroes need to fend off Gen-an at one point. The others don’t really have much of a role, and just fight in some very poorly animated fight scenes, filled with the usual clichéd speed lines and triple takes that were trademarks of anime during this area. The result is extremely boring. Plus the English dubbing, done by ADV, is atrocious. Akamusa is pronounced like “amoxicillin” and Haohmaru is pronounced “How-maroo.” Charlotte has an awful French accent… and why does Galford sound like such a loser?

The animation is pretty average, but still isn’t up to snuff when you look at it. At least for the most part the characters look faithful, only a bit more “humanoid” and normal. Tam Tam and Wan Fu look like regular mooks, rather than their sizable in-game counterparts. Earthquake is represented pretty well, though.

In the end, this sixty-minute movie feels just like what it was intended to be – a quick cash-in on the Samurai Shodown phenomenon, with no regard for quality or canon. It’s best left avoided.

The second OVA is specifically based on the events of the second 3D game, Warrior’s Rage. It really tries to be deeper and more cinematic than the horrid original, and it certainly achieves that. But is it any good?

The previous title seemed to cater towards a younger audience, but Samurai Spirits 2 opens with Genjuro in the aftermath of a bloodbath, having (rather messily) finished an assassination job. He looks up to find a mysterious man and challenges him to fight, only to be defeated rather handily. And that’s enough to introduce the main antagonist into the story.

The man is none other than Asura, the demonic swordsman from Makai. It appears he has just recently arrived from the underworld in pursuit of something, and it doesn’t appear to be to take in the scenery. In previous events, he has escaped the clutches of Yuga, and now seeks to take care of Shiki, her puppet. In the meantime, Haohmaru is lounging around under the care of Nakoruru and Rimiruru, sponging off their kindness, when they run into Galford. They grow concerned about the return of Yuga, and things become increasingly serious for our heroes.

And then there are some fights and that’s pretty much it. However, the story is told in a rather fragmented way. While there are various flashbacks, the actual story is a touch broken. We get a competent introduction of the characters and a feel for their personalities, but being such a short running time between the two videos totalling less than an hour, there is no way for everything to be explained or having a deep meaning. Lots of scenes look impressive and have good interaction between the characters (Especially the conflicting viewpoints between Nakoruru and her bust counterpart) but they’re never deep enough. Characters muse about the re-emergence of Yuga, or ponder whether they need to kill Shiki, and Nakoruru wonders whether she should fight. The appearance of Galford and the Dekus are probably there to please fans, but their presence doesn’t really make sense. It’s as if the producers wanted to introduce some characters simply to be cool and dramatic. It’s nice that they didn’t attempt to cram the entire character roster into the movie, like the first one did.

Then again, there are some good fight scenes. The action is reminiscent of the first movie but uses more of the character’s signature attacks. It also has a lot more blood and the camera provides nice views of the action.

The production won’t win any awards, and it looks like it didn’t have much of a budget behind it. The characters are recognizable, but some look awfully freaky with the drawn, bug-eyed anime look. The drawings are generally better, at least, and it certainly beats the drab, colorless look of its predecessor.

So, in summary, the story wanders a bit and some aspects are somewhat illogical. But it does have decent character moments and interesting situations, nicely amplified by some good voice work from Japanese actors, to keep you watching. It’s definitely worth it for fans of the series, but will be of little interest to anyone else. It was never translated or released outside of Japan, although fan subs and bootleg Asian DVDs exist. The cover artwork was provided by artist Aoi Nanase, who gained quite a bit of popularity due to her Samurai Shodown doujinshi. 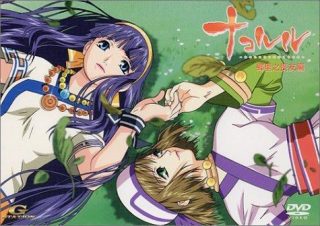 Nakoruru’s solo adventure was also turned into an anime. This movie oozes potential, promising conflict, backstory, beautiful animation, drama, and perhaps even a love triangle. Surely an anime set in this vein (like Rurouni Kenshin) would be worthwhile.

The video opens with a young girl trudging through the snow-saturated wastelands, clearly exhausted from a difficult battle. She is both mentally and physically wounded, and has horrific flash backs as she fights to stay awake. However, she can withstand the cold and weariness of her body no longer and collapses. Luckily, she is retrieved by her childhood friends, and taken back to the village to recuperate.

This girl is the Ainu warrior Nakoruru, and no sooner has she returned from the trauma of a previous slaughter, problems began to rear their heads in the village. Animals have began to go bonkers, a strange woman has arrived with dubious motives, and Nakoruru’s inner conflict with Rera is increasing. Will this young woman ever be able to find peace?

Nakoruru is a reluctant warrior girl who proves to have a peaceful heart, but at the same time wishes to protect those she loves. A rather close friendship is challenged by an unclear love triangle. With some mature themes and plenty of drama, it makes for good watching. It’s familiar, it’s well known to appeal to the anime market, and Groove Corporation, the production studio, definitely has the skill to do it well and add some extra depth in the process. It is a little bit strange that an anime based off a fighting game franchise has no real fighting or even action, but it’s mostly intended to flesh out Nakoruru’s backstory, which was only hinted at in the main game series.

The only problem is it never got to finish. It’s clear that this first episode was the introduction to a beautiful and exciting series, but due to budget constraints, as well as the general apathy of consumers, only one episode was released. The end of the OVA clearly leaves the door open to some good angsty storytelling and simply leaves you hanging. This is a shame as this is easily the best Samurai Shodown animation yet, and you don’t even have to be a fan to enjoy it. The only real complaint I have is the fan service. Early on, the viewer is treated to the top end of the main character for no good reason. And there’s even more of them later on, all in the span of thirty minutes. Multiple occurrences are simply an excuse to offer an exercise in voyeurism. Of course, if you like pointless servings of babes, boobs and bangs then this should be right up your alley.

It’s reasonably well produced, of course. Groove Corporation has a nice sense of visual design, good computer animation and solid production values which assures it looks rather impressive. The character designs were done by artist Yasuomi Umetsu, usually known for sex-and-violence filled animes like Kite and Mezzo Forte, but also contributed character designs to random other video games, like Castlevania 64 and Shin Megami Tensei NINE. Nakoruru and her sister look fairly different from their video game counterparts, and a few new characters show up, such as Yantamuu (an Ainu lad with the hots for Nakoruru) and Manari (Nakoruru’s best friend, who makes cameo appearances in Capcom vs SNK 2). There’s lots of color in the characters’ very stylized outfits, and some rather dark storytelling hidden beneath. It’s really too bad this never got to finish, because there’s lots of potential. It was never released in America, although fan subs can be found.