The King of Fighters ’99 starts the NESTS storyline, a plot of an evil organization who seeks to clone the world’s most powerful warriors and use their DNA for their own nefarious purposes. The new hero is K’, joined by cyborg grappler Maxima. Other new characters include the sadistic military girl Whip, stupid little kid Bao, Tae Kwon Do master Jhun Hoon, and Chinese girl Xiangfei, the latter of which is taken from Real Bout Fatal Fury 2. The roster is relatively small, and feels a bit lazy, seeing as how two characters are literally Kyo clones (Kyo-1, who plays like the ’94/’95 Kyo, and Kyo-2, who plays like the ’96/’97 version.) Iori and the “real” Kyo (who has another new moveset and is the version used in all following games) are initially hidden – they weren’t going to be in the game at all, but SNK eventually added them due to popular demand. The look and feel of The King of Fighters ’99 is quite a bit darker than the other games, which also shows through in the soundtrack. The character portraits, while still by SNK’s house artist Shinkiro, have a much more modern-feeling, cleaner look. 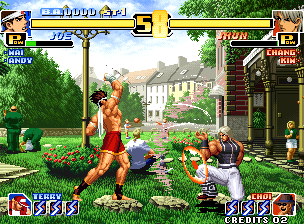 Taking a page from the Capcom’s frantic “Versus” games, King of Fighters ’99 introduces Strikers into the mix. Now each team consists of four characters, but only three are let into battle. The fourth is designated as a Striker, who can be called out a limited number of times to execute special attacks. 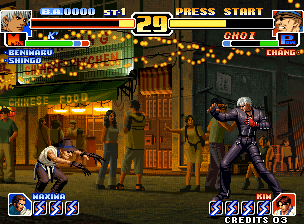 There are also two special modes that can be activated when the power bar is at max with three stocks – Counter Mode, which strengthens offense, allowing to execute super moves infinitely during this short period of time, and even combo in them; and Armor Mode, which enhances defense but disables any super special moves. The “Extra” mode from the previous games is gone entirely, while the tactical roll has changed a bit – instead of just dodging backwards, characters leap back then forward again. The player is also graded after every fight, and assigned “Battle Points” – the only way to fight the true last boss is by consistently keeping the ranking high. The final boss is Krizalid, who takes on two different forms before finally going down. KoF ’99 also is the first game that removes the characters cheering from the sidelines, for whatever reason. Alas, due to weird censorship issues, the blood was removed from the American versions, and Whip is missing a move involving a firearm. 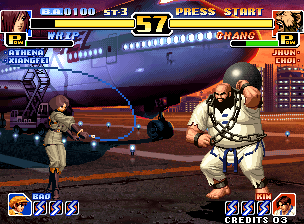 The King of Fighters ’99 was ported to PlayStation and Dreamcast, with the Dreamcast version subtitled to “Evolution” – both were brought to America by Agetec. The Dreamcast version has 3D backgrounds once again – some of them are recreations of stages from the arcade game and one or two are completely new – and they look much sharper than they did in KoF ’98. The character select screens have been touched up a bit, too. Load times are pretty much nonexistent, and the music issue from the previous DC game was finally fixed. This version also introduces some extra Striker characters, including Vanessa and Seth, who were being prepared for KoF 2000. In theory, the game would link up to Battle de Paradise for the Neo Geo Pocket Color to obtain more Extra Strikers, but since that game never came out in America, that feature was excised. Naturally, the PlayStation version isn’t quite as good, as it has cut animation and load times, but still plays fine, and has a color edit mode. The best feature of this version, however, is a massive gallery full of unused alternate sprites, concept sketches and goofy artwork. 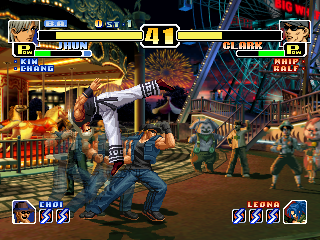 KoF ’99, 2000, and 2001 were compiled on the PlayStation 2 into the NESTS pack. This release contains both the original Neo Geo versions of KOF ’99 and the Dreamcast version, including 3D backgrounds and extra strikers. Like all of the other Neo Geo anthologies, it allows to chose from original or arrange soundtracks, color editing, in game move lists, and online play (the latter only in Japan.) However, all this only applies to the DC versions in this anthology. The Neo Geo versions only have the original music with no move lists. The PlayStation Network has the PlayStation version this time, under the PS1 Classics label, so it comes with the art gallery, but also the drawbacks of that version. 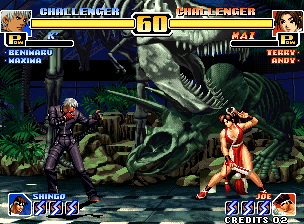 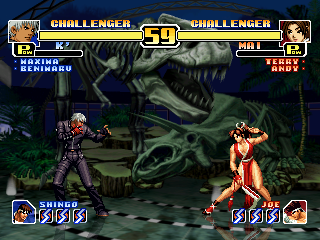 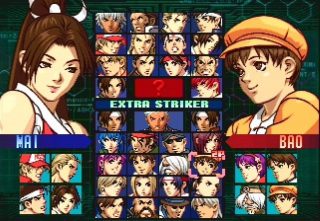 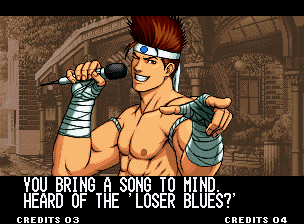 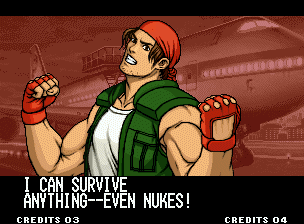 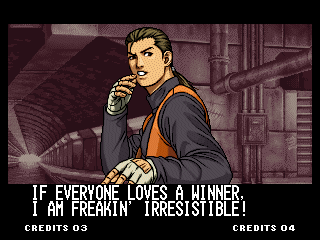