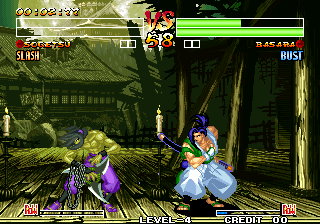 Samurai Shodown IV‘s story takes place in the early winter of 1789, a year after Samurai Shodown III, but still prior to the events of Samurai Shodown II. Zankuro is once again the game’s antagonist, having been revived after his death in the last game, and the plot still revolves around his persecution. When you begin the game, you’ll see a timer set at eight minutes. This means you’re under pressure to reach Amakusa’s castle. If you reach the final stage in time, you’ll fight Amakusa and Zankuro and get the real ending. If you exceed the time limit, you fight an alternate character and receive a bad ending. The roster from Samurai Shodown III remains intact, with two new characters added: the ninja brothers Kazuki and Sogetsu Kazama, who wield the respective powers of fire and water. Charolotte, Tam Tam and Jubei Yagyu are also back, adding another three faces to the roster. 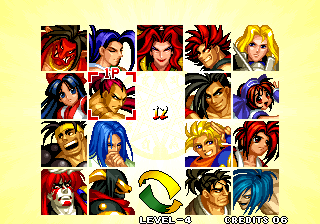 Mindful of the qualms many gamers had with the third installment, SNK sought to amend them in the fourth. Samurai Shodown IV is largely identical to the precursor, although the team has modified various functions and added in more tweaks, resulting in an overall more polished experience. Air blocking has been removed, and the “Rage Explosion” maneuver has been introduced: pressing A, B and C together will completely change the background (usually to something darker), and your character sacrifices their POW meter for an entire match in exchange for a massive power upgrade and an opportunity to unleash a special technique. Samurai Shodown IV is also the only title to have a clearly defined combo system: by pressing the C and D buttons followed by a series of commands, the player begins an auto combo that maximizes at fourteen hits. These combos, while cool-looking, do little damage, but automatically max out the POW meter. The final system addition is the “Fatal Slash” technique that allows the player to execute character specific fatality attacks, reducing the opponent to an even bloodier end. You can even commit seppuku if you want to deny your opponent the glory of a win.

Samurai Shodown IV‘s system and characters are more balanced than its predecessor, resulting in not only a much more playable title, but one of the best in the series. It’s little wonder SNK used this system for its next ventures, Samurai Shodown 64 and Samurai Shodown 64: Warriors Rage. It’s also probably the most violent game in the series until then, to be surpassed only by Samurai Shodown Zero Special. Additionally, it features the absolute best Engrish of any SNK title, which is remarkable achievement: whenever you win a match, the text will declare “VICTOLY!” 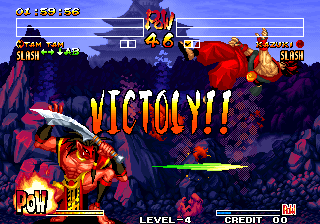 The home ports of Samurai Shodown IV were released in 1997. The Saturn version once again uses the RAM cart and maintains most of the animation with minimal load times, although unfortunately there’s a bit of slowdown with some of the bigger sprites. The PlayStation version, given the dubious “Special” subtitle, suffers from even worse animation and load times, although it’s not nearly as bad as the Samurai Shodown III port. At least the dull loading screens have been replaced with attractive art. Cham Cham has also been added to the playable character roster in this version, although she has no story mode. The Wii and PlayStation 2 ports as part of the Anthology are nearly perfect, but contain brief load times before fights.