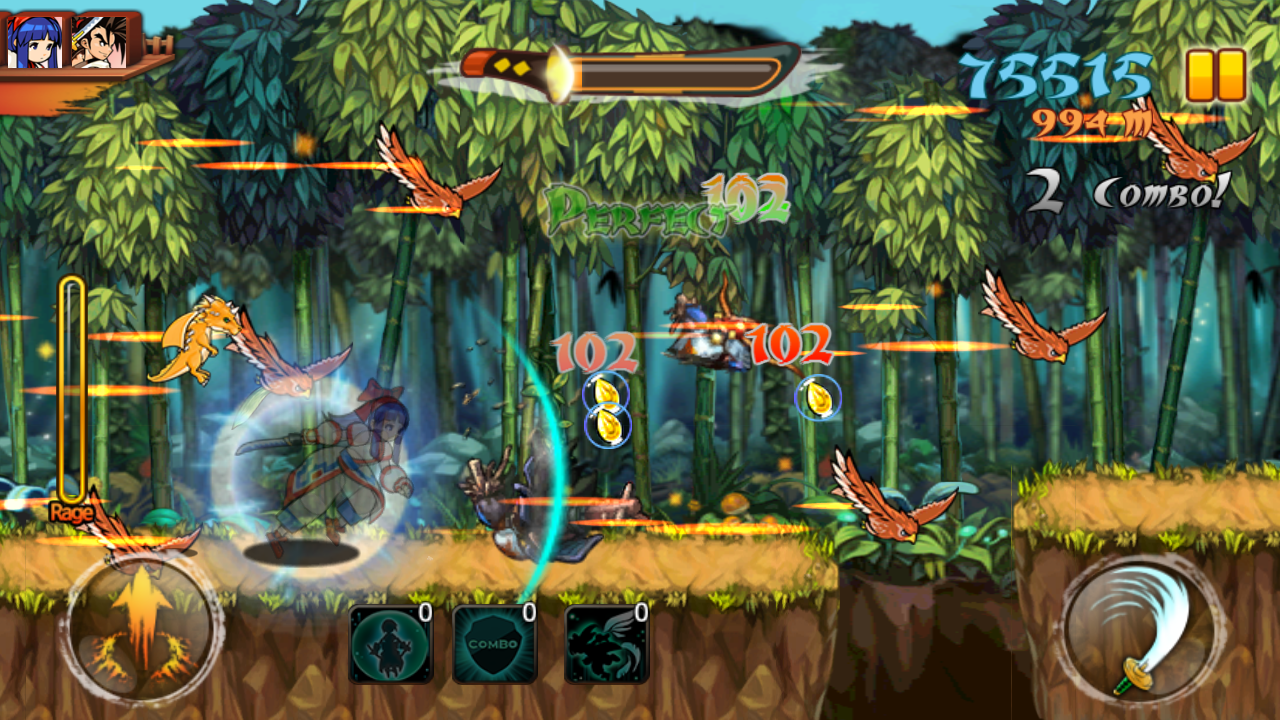 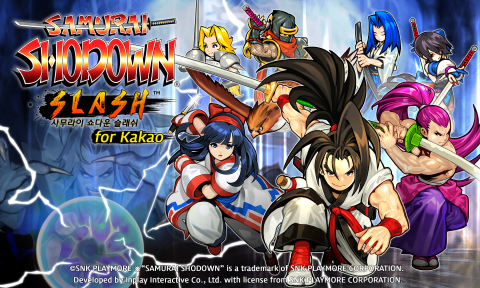 SNKP has a long history of licensing their IPs to Korean studios, so it’s not surprising that Samurai Shodown would end up on smartphones in form of a free-to-play infinite runner game. But it wasn’t just running alone – the franchise would have been wasted on something that, after all. That’s where the “Slash” in the title came in. In addition to a range of (mostly) indestructible traps like spikes pits and salves of burning arrows, you would frequently find yourself forced to hack down opponents in order to avoid collision. Most of them were inanimate – literally just wooden sword training dummies – but there were also demons that threw projectiles at you or hopped up and down to throw you off when trying to jump over them.

The game had two modes – in the regular stages you just kept on running through a variety of stages until everyone in your squad of three warriors went down. There were five distinct areas with different backgrounds, after which the game just kept looping as it got faster and faster. In boss mode, you either got to fight Amakusa or Zankuro after every three stages, who kept hovering at the far end of the screen. Some of the projectiles they threw at you had a different color, which signified that you could send them back at their originator with your sword. Every few hits, the fight transitioned to a pointless “weapon clash” sequence, where you just had to keep tapping the screen like crazy to slice of a large chunk of the boss’ health. Maybe the developers just didn’t think of the possibility of someone using both thumbs for this, as the only way to fail was by not trying at all. 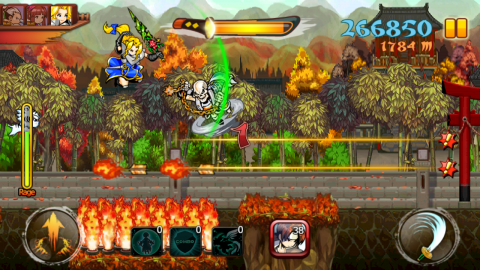 As a free-to-play game, of course Samurai Shodown Slash required a ton of upgrade options. Characters could be upgraded by increasing their level (which increases the score and money they gain), buying them new weapons and upgrading those as well (which gives a slight increase in range and attack speed).

But the first and most important step was to unlock more warriors to fill your squad, so you got essentially three lives instead of one for each run. Every new character had some special ability that made them superior to the previous ones. Since regular Haohmaru, Nakoruru and Genjuro were the first to be unlocked, immediately followed by their Bust versions, the most famous characters ended up not getting much use after the better ones were unlocked. From Bust Genjuro onwards, most strong characters got short hovering time on their second jump (double jumping was standard for everyone), which made the stages a lot easier. Shiki had an additional shield that allowed her to take another hit, while Bust Haohmaru rushed forward a few extra seconds when he was the last to die. Charlotte in turn could skip a few metres at the start of her turn. Galford and Hanzo even got a triple jump by default. Every character also had their own unique supermove that got triggered automatically when the sword-shaped meter at the top of the screen got filled, which were all typical for the characters from the fighting games.

To make the original characters a bit more competitive, you could unlock and equip permanent special buffs, which ranged from score and money bonuses to supplements for the cooler abilities. So even the regular characters could gain a very short hovering boost or an additional jump, but since these buffs applied to the entire team, they still ended up outpowered by the rest. In addition, temporary items like a shield or a one-time rescue from a fall could be bought before each run starts. 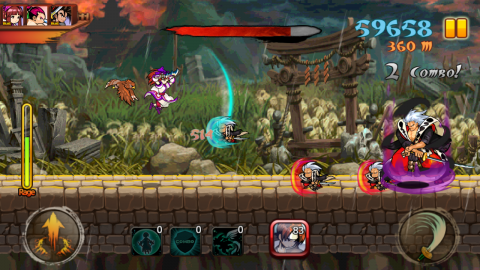 The party was further accompanied by one of many possible pets, which included familiar companions like Nakoruru’s hawk, Rimururu’s ice spirit and Galford’s dog, but also more extravagant creatures like a frog, a squirrel or the turtoise-and-serpent guardian spirit from Chinese mythology. They were drawn at random from a tombola and could be merged in order to get better pets, but the higher the pets’ rank, the more likely the merger failed, while the pet that was chosen second just vanished. Pets didn’t have a terribly big impact on the game, though. Most of them gave brief buffs in certain intervals, like turning into a magnet for coins and score items or providing invincibility for a few seconds.

Finally, you could unlock a few support characters, which for some reason were pooled from The King of Fighters, as if the Samurai Shodown franchise didn’t have dozens of colorful characters that would have fit much better. When summoned, Mai Shiranui would take out all traps on screen, while Kyo Kusanagi took care of the enemies. Iori Yagami could even do both at once. Unfortunately, Mai was locked behind a friend invitation gate, so you could never get her if you didn’t want to bother everyone you know, while Iori had a very high player level requirement.

The monetization scheme for the game was pretty bad. Since you could earn a fair amount of rubies by placing high in the boss mode ranking of your random segment of players, your money wasn’t worth much and you’d need to spend insane sums to get a significant boost. At the same time, the standard progression without spending anything was really slow, and it took weeks simply to unlock all the characters. 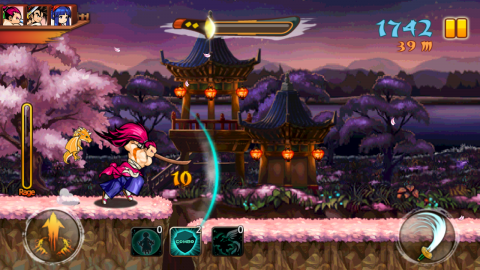 Fortunately, the core mechanics were fairly solid and despite the many upgrades, player skill remained the most important factor for success – at least as soon as you could fill your team with characters that were able to hover or triple jump, as a few parts in the later stages were designed to screw over characters without any of those abilities. It could be argued whether or not an infinite runner was an appropriate extension for the series, but as a spin-off it was much closer to an action-filled arcade experience than an RPG or visual novel. On touch screen devices, it was also probably a better idea than trying to port over the fighting game experience – which SNKP also did, so there’s no reason at all to get angry at Samurai Shodown Slash for existing.

And even those who would still get angry at it can relax, as it doesn’t exist anymore. The service was shut down on January 22nd, 2016 alongside Metal Slug Revolution, Inplay Interactive’s other SNKP license, even though it was a much better concept compared to that one. But given the not very enticing mode of monetization, it’s easy to imagine that Samurai Shodown never made its development and service costs back.