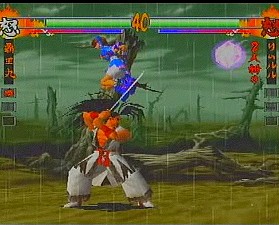 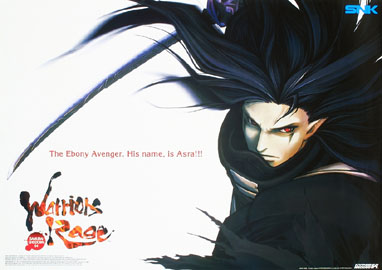 The sequel to the first 3D Samurai Shodown title hit arcades a year later. The villain Yuga is once again the antagonist, having revived herself a year after the events of Samurai Shodown 64. Two new characters appear: Taizan Morosumi, a paintbrush-wielding demon hunter, and Asura, a swordsman from the demon world who desires revenge on Yuga. Asura is actually meant to be the new main protagonist, and the Japanese subtitle is Asura Zanmaden (“Legend of Asura the Demon Killer”) Gandara also makes a return as another midboss. The greatest addition to Samurai Shodown 64 II, however, is not the characters themselves, but the representations of their Bust and Slash forms. Whereas Samurai Shodown III, IV and the first 64 merely distinguished the two alter egos with palette swaps, Warriors Rage takes a much more drastic artistic approach. The two forms are now extremely different from one another, almost appearing as two different characters in some cases.

The gameplay has been revamped and refined as well. The 3D movement has been removed and replaced with standard 2D gameplay (similar to Street Fighter EX), although there are still dodge attacks to move into the foreground and background. The 3D backgrounds have been eliminated completely – the backdrops are now two dimensional and scroll infinitely in both directions. Since the stages themselves are less polygon instensive, the character models have been slightly improved and the colors are much more vibrant in the arenas (the level with the Japanese gates and water is breathtaking), and the blood doesn’t look quite so flat anymore. Several gameplay options have been removed, while news ones have been added. Features such as the “Fatal Slash” maneuver have been tweaked with the combo system first introduced in Samurai Shodown IV. Various command attacks, such as “low jumps” and side step attacks have been implemented as well. The super moves have been changed into more traditional flashy combos, ditching the still artwork of its predecessor. Many of them are extremely impressive, almost cinematic in nature, taking advantage of the three-dimension graphics. Asura calls chains out from the netherworld, holds his opponent in bondage, and slashes them repeatedly. Taizan draws huge calligraphy marks that demolish anyone. Shiki strangles her opponent, mounts them suggestively and sucks the life out of them. Hattori Hanzo executes killing blows that shows x-rays of various bones breaking, similar to any number of cheesy kung fu movies. 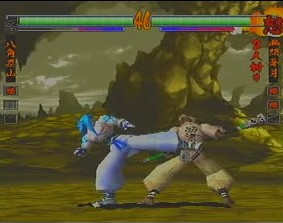 These impressive displays, along with diverse roster and other gameplay improvements garnered Warriors Ragemore respect and definitely make it superior to its predecessor. Sadly, the game’s low distribution and lack of a home port meant it failed to gain a sizable audience yet again. Currently, Samurai Shodown 64 and its sequel are sought by collectors and gamers worldwide due to their rarity. It’s a good 3D fighter, and a worthy addition to the Samurai Shodown series.

Attention: Due to the state of emulation, the screenshots for this game have various imperfections and are not representative of the actual hardware.