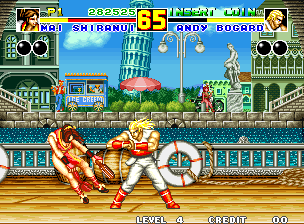 While the original Fatal Fury resembled Street Fighter II because it was based on the same source, Fatal Fury 2 is definitely a blatant clone. The plane switching has been retained, and the three playable characters from the original are back with five others (Cheng Sinzan, Jubei Yamada, Big Bear, and fan favorites Mai Shiranui and Kim Kaphwan) and four non-playable boss characters (Billy Kane and three original characters – Axel Hawk, Laurence Blood, and Wolfgang Krauser). With Geese Howard believed to be dead, he’s absent from the game this time. Instead, Fatal Fury 2 tells the tale of an international King of Fighters tournament organized by a man named Wolfgang Krauser. The controls have been made more conventional so now there are two buttons for kicks and two for punches. Everything from the size of the character roster to the combo system to the international tournament theme screams Street Fighter II. However, it transcends being a mere clone and actually ends up being a pretty decent game in its own right.

A few new techniques have been introduced into the series with this installment. Like in SNK’s Art of Fighting before, Fatal Fury 2 allows to execute a desperation move whenever the health bar is flashing. In a first for the fighting game genre, it’s possible to hop backwards by quickly double tapping in that direction. It’s also possible to crawl forward by holding the joystick in the down-forward position. These techniques show that while SNK was deliberately imitating Street Fighter II, they were also intent on further refining the formula. This all results in a higher level of control than in most other fighters and a greater level of options besides attacking, blocking, or being hit. 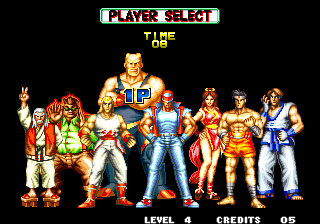 People often dismiss plane switching in the Fatal Fury series as being nothing more than a novelty. While this is essentially true about the original, it was made more relevant in Fatal Fury 2 and onward. Planes can now be switched at any time by pushing the A and B buttons at once. In the original it only lead to needlessly chasing the opponent around, but this time it’s obviously intended to serve as a means of evasion. It’s pretty effective in this respect and allows to effortlessly dodge fireballs or any other attack, and to take a very careful defensive approach to fighting. While not quite as beneficial, it’s also still possible to knock the opponent to the other plane by pushing both the C and D buttons at once. While the combatants are on opposite planes, the jump and back dash are not available, and any attack button will make them jump straight at the opponent and attack. This prevents the plane switching system from slowing down matches by discouraging players from staying on opposite planes and avoiding each other. Also, if correctly timed, it’s possible to attack an opponent in the process of switching planes and get in a hit before they are able to defend themselves.

Other than plane switching, what really defines the difference between Fatal Fury 2 and Street Fighter II is the feel of the two games and the nuances in how they are played. Fatal Fury 2 is more reactive and Street Fighter II is more combo oriented. This is a fairly minor physical difference, but these subtleties require to adapt different strategies and playing styles. Control responsiveness is absolutely impeccable in both of course, but as always, the game physics are slightly different and which of the two is better is going to come down to personal taste. Fatal Fury 2 also feels a bit slower, even when compared to the original Street Fighter 2. In particular, the jumping speed isn’t nearly as fast. 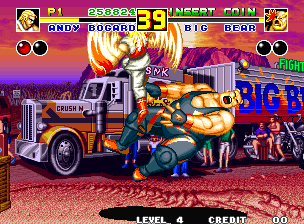 Fatal Fury 2‘s presentation has been massively improved upon from its predecessor in every possible way. Each character sprite has been completely redrawn and looks much better for it. The backgrounds are all fantastically designed and were easily the best looking in the genre at the time this game was released. The scenery still has minor changes in later rounds as the fight progresses through later periods of the day, but each background is much busier and much more detailed than any of the stages in the original game. Cheng’s stage depicts a brightly lit view of Hong Kong with a slow moving ferry floating along the water in the immediate background. Mai’s stage is set on a raft floating down a river, and Terry’s is set on a train car quickly moving along the tracks past Mount Rushmore. Jubei’s level is the best of all: A set of large framed paintings separate its two planes. If either character switches planes they will break apart to reveal a meticulously detailed garden. Andy’s arena is set on a boat floating down a canal in Italy with The Leaning Tower of Pisa visible in the background, along with Terry and Mai standing along the edge of the canal. Amusingly, if this level is played with either of the two characters, they will still be visible in the background.

Fatal Fury 2 was ported to most of the major consoles at that time. The Genesis and SNES versions, ported again by Takara, are certainly not graphically perfect, and they don’t have perfect game physics, either. Both of these ports are generally considered worthless by fans, but they really aren’t all bad. If judged on their own, both of them, especially the port for SNES, play reasonably well. However, the best console port was for the PC Engine CD, ported by Hudson and requiring the system’s arcade card. It looks better and plays smoother than the others, and it includes a completely new arranged soundtrack different from SNK’s version for the Neo CD release. As with all CD ports though, the load times are pretty annoying. The X68000 version is very close to arcade perfect. Of course Fatal Fury 2 was also included on the Garou Densetsu/Fatal Fury Battle Archives 1 for PlayStation 2.

Takara also released a port for Game Boy called Nettou Garou Densetsu 2, which lacks plane switching, has completely redrawn graphics with SD character sprites, so-so music, no voices (little speech bubbles appear above the characters whenever they execute a special move) and very different game physics. There’s a ton of crippling slowdown, so the game is only just barely playable. However, it does have every character and move from the arcade game.

There even was a Chinese bootleg version for the Famicom, which includes Terry Bogard, Andy Bogard, Mai Shiranui, Kim Kaphwan and Cheng Sinzan (and in some versions Laurence Blood) in several color variations, but of course the controls barely work, and the sprite flickering is beyond horrible. 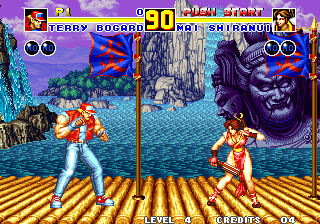 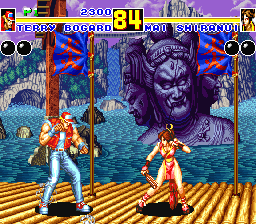 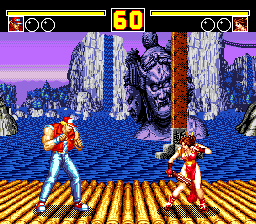 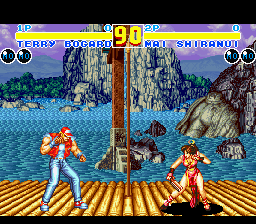 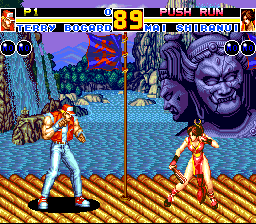 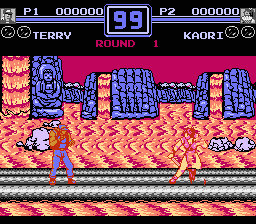 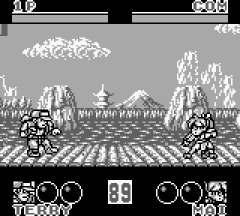 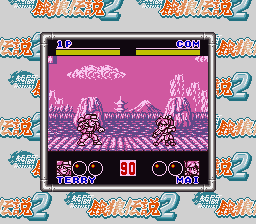