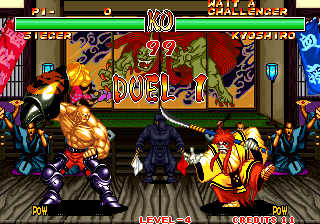 Samurai Shodown II (known as Shin Samurai Spirits: Haohamaru Jigokuhen or “True Samurai Spirits: Haohmaru’s Journey to Hell” in Japan) was released in the arcades in 1994. The game’s storyline revolves around the evil demoness, Mizuki, “The Marauding Deity.” The plot occurs in 1789, (a year after the events of the first game) and picks up after the unsuccessful attempt of Amakusa Shiro Tokisada to lead the world into ruin.

Samurai Shodown II improves upon the first game in several ways. There are now four new playable characters – Cham Cham, the cute, green haired, boomerang wielding catgirl; Haohmaru’s rival Genjuro Kibagami; Caffeine Nicotine, a tiny little old monk in a funny hat; and Neinhalt Sieger, who wields a gigantic iron fist. It also keeps most of the characters from the previous game except for Tam Tam, who apparently has been turned into a monkey and fights alongside Cham Cham. This increases the character roster to fifteen playable combatants – not including the judge, who’s playable in the ports. Add in Mizuki, the long-nailed, shape-shifting, monstrously difficult final boss, and there are seventeen characters total. 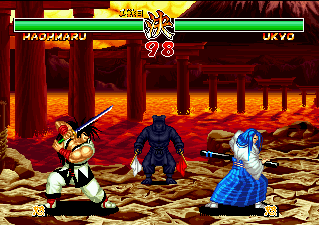 The twin slash/kick control system is identical to its predecessor, but there are additional special attacks when the POW meter is filled, which are politely displayed right above the gauge when it is maxed out. There are also more options during combat, such as the ability to destroy an opponent’s weapon rather than simply disarming them and the ability to taunt the opposing character. Each character also has a number of new defensive moves, including the ability to roll (double tap diagonally downward), hop quickly upward or backward (press B and C), and lie down flat on the floor to completely avoid projectiles (press down twice.) Hikyaku the delivery man still randomly tosses in items to assist or impede the players during combat.

Graphically, Samurai Shodown II is improved over its predecessor; arenas are more detailed, colors more abundant and the character sprites are better animated. It’s no wonder it was a smash hit in arcades and considered a classic and one of the series best among its fan base. Samurai Shodown II is pretty much the game that popularized the mold of weapon-based games, and really made SNK known. It’s still the most “perfect” entry in the series, since every game afterwards added in unnecessary elements that didn’t add much to the gameplay. There are also a few interesting gags, like the ability for characters to temporarily transform into a super deformed doll – useless but cute – or the hidden Alien (yes, from the movies) found simmering in the stew in Gen-an’s stage. 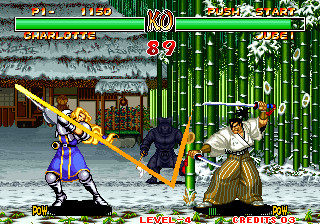 Samurai Shodown II was one of SNK’s most popular games, so it’s curious that it didn’t receive any home ports at all at the time. It wasn’t until 1998, four years after its initial release, that it was ported to the PlayStation and bundled along with the first game in the Samurai Spirits Kenkaku Shinan pack. It suffers identical problems to the original game – that is, cut animation and terribly long load times, although at least the gameplay is intact. Strangely enough, it was also ported to the PC in the late ’90s and published in America by Cyberfront, who also released conversions of Raiden II and Fatal Fury 3 for Windows 98. It’s a near perfect port, and includes the CD audio track from the Neo Geo CD version. It’s basically just like playing the game on an emulator. The PlayStation 2 and Wii versions on the Anthology are solid emulations as well.

SNK Playmore made up for the initial lack of ports much later: Samurai Shodown II was chosen to represent the series on Xbox Live Arcade in 2008, and the Xbox 360 version is also pretty much perfect, with options to turn off the smoothing filter, but it only has the original OST and not the arrange music. The game is also the only part of the series that’s available for iOS and Android devices. 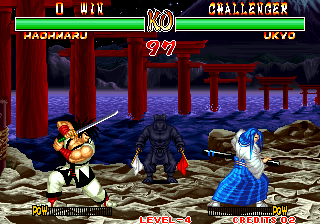 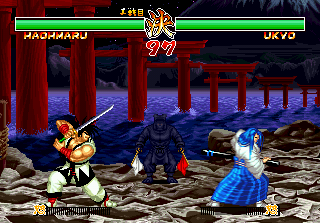