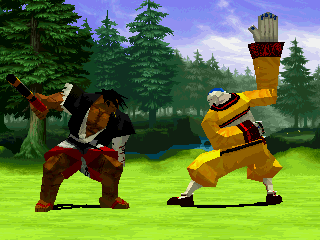 Samurai Shodown‘s third (and for a long time final) foray into the third dimension is also subtitled Warriors Rage, but it was a completely new game and exclusively released for Sony’s PlayStation in 1999, around the same time when SNK was porting titles like Fatal Fury: Wild Ambition to the console. Due to weird region-naming issues, it was originally released in Japan as Samurai Shodown Warriors Rage 2, following the naming convention of its predecessor, Samurai Shodown 64: Warriors Rage. (The 64 is omitted due to the game not running on the Hyper Neo Geo 64 system like the previous two titles.) The full Japanese title is Kenkyaku Ibunroku: Yomigaerishi Soukou no Yaiba – Samurai Spirits Shinshou, which roughly translates to “Story of the Swordsman – The Revived Blue Crimson Blade – Samurai Spirits – A New Age.” The product we received turned out to be worse than anyone could have thought possible. 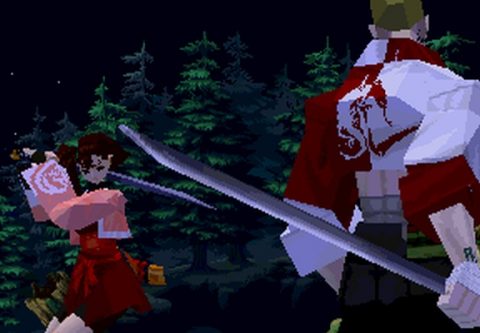 Chronologically, Samurai Shodown: Warriors Rage is the final installment, occuring in 1810 (about twenty years after the original series). The character roster is almost entirely changed, and only two characters from the previous titles remain: the aging Haohmaru and a younger relative of Hattori Hanzo. Both have lost many of their signature attacks from earlier games. Nakoruru and Rimururu make appearances as well, but only as spirits. The story revolves around how the age of the sword is coming to a close, and the aspirations of a faction called the Razor Trio located on a criminal island called Ritenkyo. There’s nothing wrong with the story, really – there’s quite a bit of dialogue in between fights that correlate to the chosen character. But the new cast just feels generic and flat.

Much like the Warriors Rage arcade game, this entry is strictly regulated to the x and y-axes, save for a sidestep that briefly moves the character into the background. The battle system shares several functions with its brethren, such as the Rage Gauge and Rage Explosion. The control and feel are also similar to the last two games – and all similarities end there. The system is almost entirely combo based, the input has been changed entirely to format the PlayStation controller (two buttons for slashes, one for kicks, one for the dodge mentioned above, and another to activate the Rage Explosion technique). 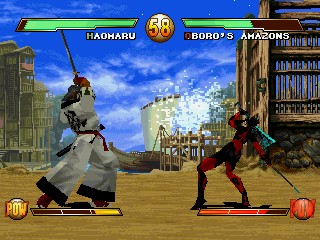 The input for special attacks and maneuvers is, at best, floaty and unresponsive. The quarter circles we’ve been performing for years come out easily enough, but most others seem to only activate at their conspicuous fancy. A dragon punch movement is already tricky; this input system makes the game nauseating. Many characters have combo-based movelists (perhaps to make up for the shoddy input system), but it’s unnecessarily complicated for an Samurai Shodown game. The computer opponents don’t even bother with special attacks or combos, and just hit you with regular slashes since the combos aren’t even that damaging.

There’s also a new life meter system. It’s separated into three decreasing “intervals” and there’s a short break in the action every time one is depleted. After the second is gone, the attacking character will taunt the opponent. Maybe the developers were striving for dramatic effect, but it ultimately just disrupts the action. This is irritating because you have to face droves of generic characters, including Iga Ninjas, “Brutes,” Amazons and Samurai. This quickly gets annoying because they have the same amount of life bars as the regular characters. Each and every one of them. Apparently the idea was to make you feel really powerful by taking on mooks by the barrelful, but you’ll just find yourself wanting it to be over with. 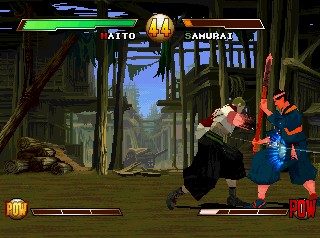 The graphics are also pretty bad, with boxy character models that look even worse than PlayStation launch titles such as Battle Arena Toshinden. There’s barely any blood, either. And while the first Warriors Rage arcade game also had flat bitmaps for backgrounds, it used some visual chicanery to make them appear more three dimensional. This one doesn’t even bother, and the results are battlefields that feel huge and empty. At least the music and ambiance are impressive. Each stage’s tune fits in just right, from the slow melody of the village and the pounding tune in the abandoned city area. There’s also loads of unlockable artwork, and you can even go through the aptly named Battle Mode to power up a character.

But still – who would want to buy this game? Only masochists who enjoy shoddy frame rates, loading times, unintuitive controls, poor gameplay and boring characters would get any kind of kick out of Warrior’s Rage. All of its redeeming qualities, are overshadowed by the fact that the whole game seems like it was rushed out the door. It’s an extremely poor entry into the Samurai Shodown series and is a deplorable game in general. 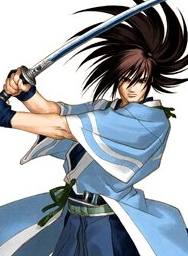 Seishiro Kuki is the main hero of Samurai Shodown: Warriors Rage. He works for the Japanese government and seeks to take revenge on his adopted brother for the death of his father. His design is okay, but he’s so boring as a character. He’s a pretty good character to play, but this isn’t saying much due to the game engine. 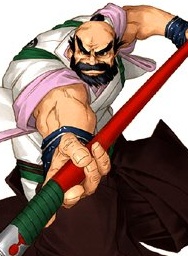 Seishiro’s older sidekick, who accompanies him on his journey. His spear attacks are reminiscent of Charlotte, though, which counts for something. 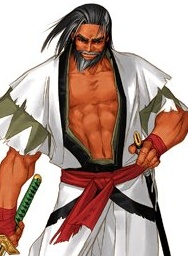 The only truly returning character to denote this as a Samurai Shodown game at all. He has aged quite a bit and lost some of his moves – maybe he’s gotten too old to pull them off, anymore? 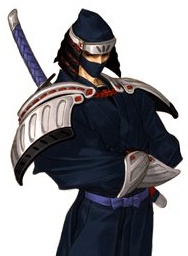 He isn’t really the Hanzo from the other games – throughout history, there have been actually four Hattori leaders who in some capacity bore the name Hanzo, which has been taken by popular culture and transformed into this continuous lineage of super ninjas, with the name functioning more as a title. At least that’s a better explanation for his reduced moveset than Haohmaru got. 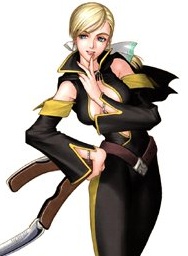 The inevitable fan service character, Saya is a buxom blonde who wields dual curved swords, which makes for an interesting play style. She seeks to assassinate the Razor Trio. 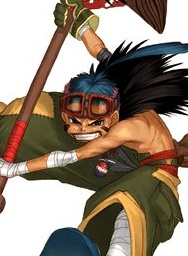 A youthful punk that likes beating up brutes for fun in Warriors Rage, which makes him mildly interesting. Uses high-flying attacks and a giant mallet. 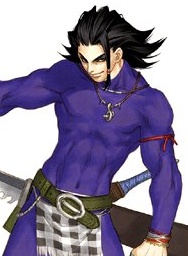 This man seems to be supposed to be a “bad guy.” Wears a rather laughable outfit and uses a razor sword. Also seems to be gay, bi, or simply doesn’t know his “girlfriend” is a transvestite. He’s interesting for that reason alone. 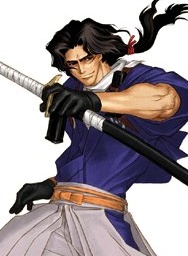 He uses a sword/rifle weapon. He also wants the Razor Trio. Seeing a pattern? 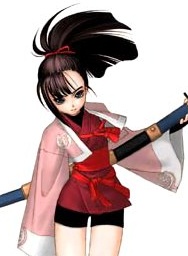 A young girl from a Samurai family that uses a sword nearly twice her size. Also has the obligatory pet animal that joins her in her win animation. 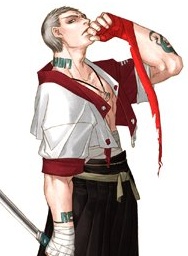 The only decent new character in Warriors Rage 2. His design is awesome, as is his moveset. Has some wicked combos and a power-up move. His involvement in the story isn’t any better explained than the other characters, though. 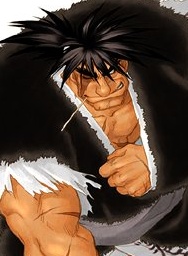 A big gang leader that uses a stick as a weapon. He’s too cool to put in an effort, so he keeps one arm in his jacket. He wants revenge for his murdered comrades. 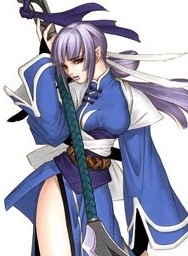 Daughter of Shiki and Asura, but adopted by Haohmaru and Nicotine. Uses a double sided blade. She apparently has a struggle with the demons within her, which she needs to deal with before they take over completely. 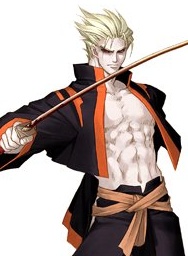 Adopted brother of Seishiro, and a member of the Razor Trio. They’re trying to take over the government and/or attain more power. Has a better design than his sibling, although he makes for a very poor man’s Genjuro. He killed his foster father and took one of the family’s sacred swords because he knew he would never be accepted as a true heir to their style. His brother eventually kills him for this. 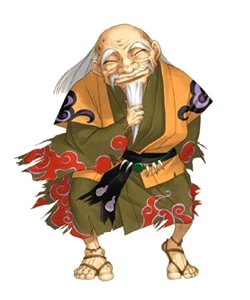 The main villain of Warriors Rage. Uses two rather neat looking blades and you must fight him while he is invisible. Not much to say. Too bad he’s not playable. 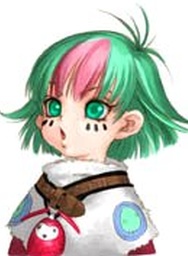 She’s the younger sister of Ran Po. It’s highly disturbing that the in-game character voice sounds like some sort cross between a chicken and an army clock alarm, and may have you waking up in a cold sweat for weeks to come. 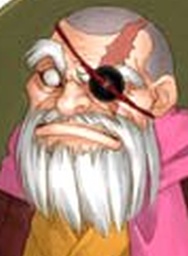 The master of Ran Po and Minto. And he also wants a piece of the Razor Trio. That’s it. 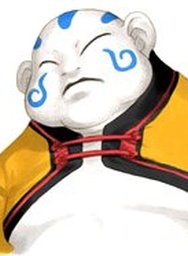 Some Chinese warrior that uses his enormous left hand as a weapon and has a crush on Nakoruru. His voice actor is hilarious. 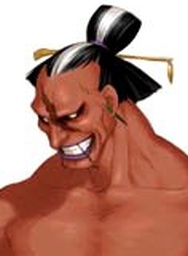 A crazed murderer that inhabits the outskirts of the Ritenkyo. He likes “beautiful things” and like Yaci (in fact he’s an exact gameplay clone), uses poison in combat. He resides in the ‘tower of prayer’ and functions as a mid-boss, although a very sorry one.