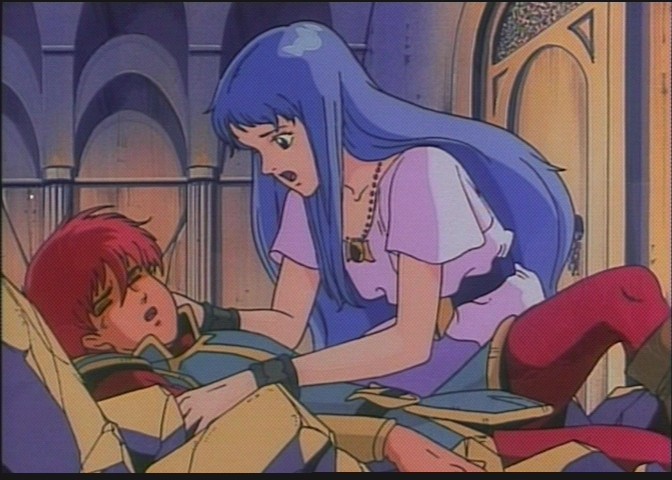 Like many of the more popular video games in the era, Ys was honored with two anime OVA series. The first one is seven episodes long and covers the first game. This might sound a bit off, because the total running time is about as long as it takes to play through the game. While it follows the basic events, a lot of the characters and their relationships are fleshed out quite a bit more. There are certain nuances that affected later games – the character Slaff first appeared in this OVA, and eventually ended up in Ys Eternal. The first town Adol ventures into, Promarock, is eventually visited in Ys IV. The music is good, but one song – “First Step Towards War,” the field theme – is used far too often. As this is an early ’90s anime, the character designs and animations are rather lame.

The second OVA covers the story of Ys II, but it is titled Ys: Tenkū no Shinden – Adol Christin no Bōken (イース 天空の神殿 アドル＝クリスティンの冒険, meaning “Ys: Heaven’s Sanctuary – Adol Christin’s Adventure”), and only four episodes long. The storyline is much altered and condensed (Lilia gets captured as a sacrifice in the first episode and nothing is mentioned of her illness, for example) and the narrative works much better for it. Approximately half of the story is spent convincing the people of Ys that Adol is not a heretic, as they are still ignorant that anything exists beyond their floating continent. Eventually, the story picks up. The art is also much better, and there’s a greater music selection, all of which is excellent.

Like most video game anime, the Ys OVA is bound to be pretty dull unless you’re a fan of the series. Still, there are far worse out there. Astonishingly, Anime Works brought the series to America in 2002, perhaps anticipating that Ys Eternal would be released for the PC in English, which it wasn’t. The menus are clearly designed by someone with a passion for older computer games, as they feature graphics that would’ve looked at home on a PC-88. One does have to question putting simulated load times into DVD menus when there are plenty of real pauses to sit through. You can buy the three discs separately, or, far more economical, get the Ys Legacy set, which includes all 11 episodes. Also included is a trailer of an Ys IV: Dawn of Ys anime. It was meant to be a pilot for the creators to shop around to different animation studios to see if they wanted to make a full length version, but there were no takers, so nothing really came of it.

Of course, Japanese fans have always had access to much more other media Ys material that we cannot cover here, namely a ton of mangas and novels and drama CDs.