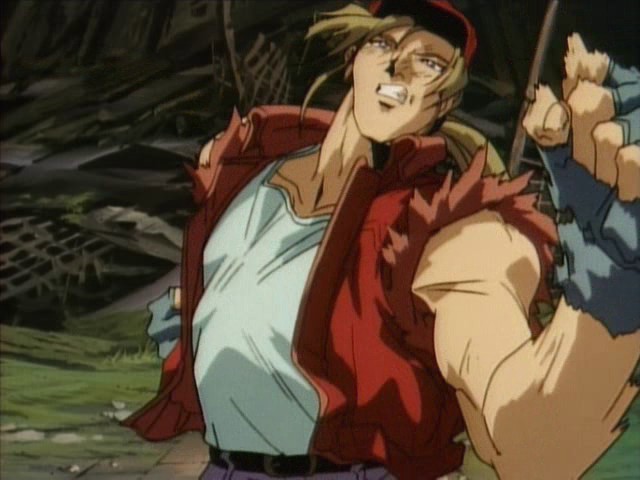 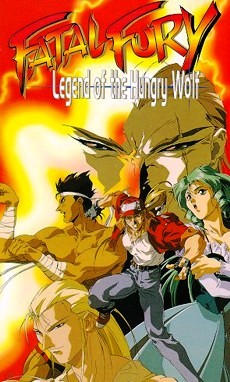 The first of two Fatal Fury TV specials, Legend of the Hungry Wolf, retells the story of the first game. It begins with the murder of Jeff Bogard at the hand of Geese Howard and his thugs. Terry and Andy, still just children, witness their father getting brutally beaten, but are helpless to do anything. Their master Tung Fu Rue advises them to spend the next ten years training as martial artists to enact their revenge. Apparently, both Jeff and Geese were students of Tung, who eventually elected to pass down his knowledge to the elder Bogard. Geese grew jealous and wanted all of the secrets of Tung’s martial arts to himself, so he disposed of Jeff as retribution. The story then fast forwards those ten years, as Andy and Terry enter the King of Fighters tournament to get close to Geese, and eventually defeat him.

The anime introduces a new character named Lily MacGuire (unrelated to Lily Kane, Billy’s sister). She’s apparently the “Queen of Southtown,” a fashionable young woman who’s desired by men all across the city, but in reality, she’s little more than a slave to Geese and his men. Geese had actually drafted her at a young age, and he played a small part in Jeff Bogard’s murder. Terry, upon first meeting Lily, immediately falls in love with her, and vows to set her free. When she helps Terry and Andy escape from Geese’s thugs, she is brutally murdered. As they escape, Tung is also mortally wounded, causing Terry to swear triple revenge on Geese. The ending is kind of lame – Terry just does one of his special kick moves to knock Geese into water, instead of hurling him off the top of his own tower, completely eliminating one of the most impressive parts of the original story. 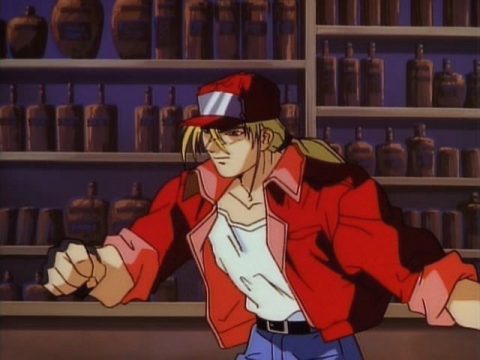 Legend of the Hungry Wolf is only about forty five minutes long, which doesn’t leave much time for plot development – but then again, it’s not like there’s a huge plot to begin with. The characters generally lack much in the way of personality, so it’s hard to really get attached to them, even when familiar with the games. The fight scenes are pretty boring, that is when they actually happen – there are least three instances where the characters spend time preparing for a scuffle, only to be thwarted before the action can begin. They must’ve been saving the budget for the final moments, when Terry, Andy, and Joe face off against Billy Kane, Raiden, and Geese himself.

The character designs for this and all of the other Fatal Fury anime are done by Masami Obari, whose renditions of the cast look and feel a bit off. He draws his male characters with very slim eyes, while his female designs have huge bug eyes. In addition, Andy has silver hair for no good reason.

There’s nothing special about this film, expect for maybe the way it portrays Southtown. It’s a major metropolitan city filled with street signs in Asian languages, reminiscent of Hong Kong, even though it’s supposed to be in America. It also shows the city as filled with destitute young kids. It’s a side of the city you’re never really shown in the games, and for what little use it is, it does flesh out the world a little. All taken together, Legend of the Hungry Wolf is better than, say, the Samurai Shodown or Art of Fighting anime, two particularly abysmal renditions of SNK games, but it’s not particularly great either.

The second TV Special (roughly) covers the storyline of Fatal Fury 2. Terry Bogard has obtained quite a strong reputation after beating up Geese Howard (who isn’t really dead but just lives in a cave somewhere, sulking from his loss.) Even little kids dress up as Terry and pals and re-enact his battles. Fighters from all over the world have come to challenge him, but he beats them all pretty easily, including Kim Kaphwan. However, he meets his match with Wolfgang Krauser, Geese’s half-brother, who pummels the hell out of him. (Wolfgang, for some reason, has transformed from a gruff old bastard of a man into a bishounen who parades around in a ridiculous suit of armor.)

Depressed beyond belief, Terry spends the next half of the movie drunk and depressed. It’s so overdone that it comes off as more silly than dramatic. This is a huge disappointment to a little kid named Tony, who looks up to the once-proud Bogard as a hero. Andy and Mai decide to get together to stage an intervention and get their old pal back on track. They don’t exactly help much, as Mai gets kidnapped by Laurence and Andy needs to protect his woman. Joe tries to beat up Krauser, but ends up in the hospital instead. Eventually, Terry gets his act into gear after a confrontation with Axel Hawk, and finally decides to take on Krauser once again. 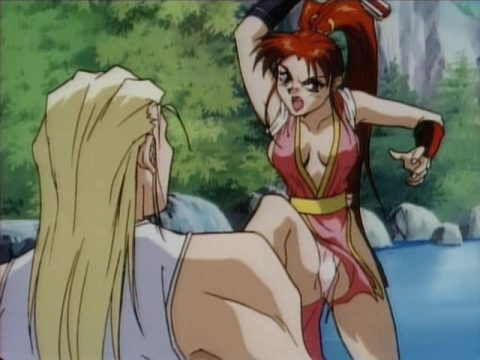 The New Battle is a bit longer than the previous OVA, clocking in at just over an hour. There’s still not much a story to tell here, but it’s definitely an improvement. Sticking Mai in the mix adds for a bit of personality (and the predictable fan service) and it fleshes out some interesting backstory between Geese and Krauser. The fight scenes are also a little bit better, even though there’s a disturbing number of scenes featuring little kids getting beaten up. The artwork quality is about the same, although Andy actually has the right hair color now. This OVA was originally released separately from the first on a VHS tape, but can be found bundled together on a tape called Fatal Fury: One-Two Punch, or on a DVD named Fatal Fury: Double Impact.

Unlike the two OVAs, Fatal Fury: The Motion Picture tells its own self-contained story and is not based on any of the existing games. The first two games were fairly grounded in reality, at least as much as a story about guys who can create hurricanes with their arms can be. But this film takes the series into the realm of the supernatural, a prelude to the turn that the series took in Fatal Fury 3 with the Jin Twins and the magical scrolls.

The story begins with Cheng Sinzan (looking quite a bit thinner than his game counterpart) exploring some ruins in Egypt. He discovers a mysterious artifact in some underground ruins, but he is attacked by a gang, which seems to use strange elemental powers. This group of ruffians is lead by a man named Laocorn, who is seeking legendary items all over the globe in order to obtain some kind of mysterious power. 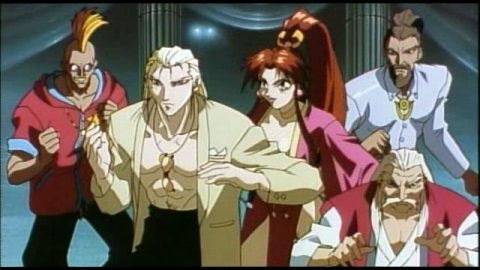 Back in Japan, Terry Bogard is confronted by a young girl named Sulia, who’s the twin sister of Laocorn. She’s worried about her brother’s evil ways, and after learning that Terry defeated Wolfgang Krauser, believes that he’s the only person that can stop him. In addition to Sulia, Terry is joined by Andy, Joe and Mai, and the gang ends up on a globe trotting spree to uncover the lost artifacts before Laocorn does. Naturally, that doesn’t quite work out, and eventually Terry must confront Laocorn and his minions in battle.

Fatal Fury: The Motion Picture is not only improved over its OVA predecessors, but it’s better than most video game-based anime overall. This is partly because it’s one of the few that doesn’t necessarily require that the viewer be familiar with the game series. All of the main characters have likable personalities that are fleshed out more than the other OVAs – Terry is a soft-hearted tough guy who’s still haunted by the death of Lily, Andy is constantly embarrassed by Mai’s advances (despite technically having gotten over this in the second OVA), Mai is appropriately light-hearted and slutty, and Joe is a firey blowhard who’s constantly getting into tiffs with his friends. There are tons of cameos from characters from the game, including Cheng, Kim Kaphwan, Big Bear, Richard Meyer, Jubei Yamada, Duck King, Lawrence Blood, Billy Kane, and even Geese Howard for some reason. But they’re all secondary to the plot. There are plenty of other scenes that will probably amuse game fans – the first place that Terry heads to in Japan is Neo-Geo World, the now-defunct SNK arcade, where we learn that Terry might be an expert martial arts fighter, but he’s terrible at fighting games. There’s even more Mai fan service than the previous OVA, with an absurd shower scene, a few shots of her clothes ripping off, and a completely ridiculous magical-girl style transformation. 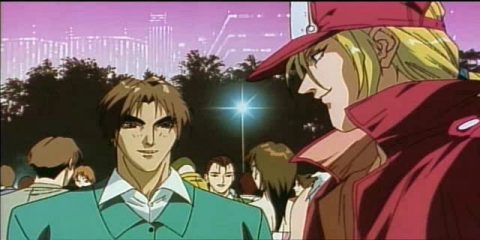 Most video game anime, including the Fatal Fury OVAs, fall into the trap of being far too short to really be of any substance. Since this is a feature length movie, it’s about ninety minutes long, which allows for a complete story to be told. There’s actually a lot of exposition between the rather brief fight scenes, which usually just involves the characters using the signature moves a few times to beat their enemies. It’s not until the latter half of the movie where the action really heats up. Compared to other video game anime, this one actually has a budget, which means the animation is pretty good. It was made in 1994, so it’s obviously not as pretty-looking as modern anime motion pictures, and those who don’t care for Obari’s character designs won’t find themselves converted, but it’s a definite step up.

Taken on its own terms, Fatal Fury: The Motion Picture is only kind of okay. But even though it’s no masterpiece – it’s basically an Indiana Jones rip-off combined with a martial arts flick – it’s good to see a fighting game anime that’s actually somewhat worthwhile.

Even though SNK Playmore had effectively abandoned Fatal Fury as a fighting game series in favor of the more popular The King of Fighters, the company hadn’t completely forgotten its breakthrough work. For the 15th anniversary of the series, SNKP released a massive soundtrack compilation with six CDs, covering all the games in the series. Included in this box also was a DVD, which contained “Memories of Stray Wolves.” 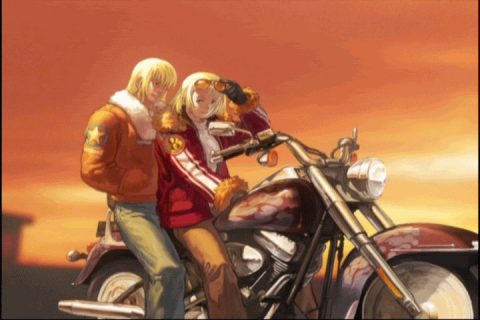 “Memories” isn’t really a movie, though – there is no animation outside of some footage from the games, and the plot is brought forward by narrated still images. Most of it takes place in Pao Pao Cafe, where Terry, Rock and Mary (spoken by the same voice actors as in the games) reminisce upon the events of the past decade and a half. It’s technically just a rather boring drama CD, banking heavily on nostalgia and nothing else. It is nice to see Duck King, Richard Meyer and Blue Mary in their would-be Mark of the Wolves-era appearance, but there’s not much else to get out of this.