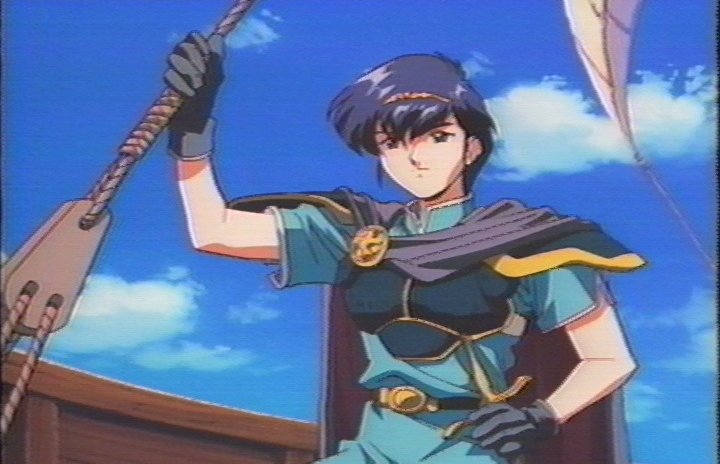 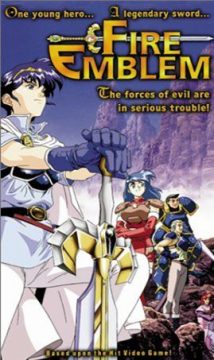 In 1996, an anime based on Fire Emblem was released. It’s only a two-episode OVA that details the events of the first game. The first episode gives a bit of backstory, detailing how Marth fled from his kingdom and how he became friends with Caeda. The episode then ends with the story of the game’s first battle, and Marth’s return to take over his kingdom. The second episode covers stages two and three of the game, mostly focusing on Marth and company saving Julian and Lena from the thieves at Devil Mountain. 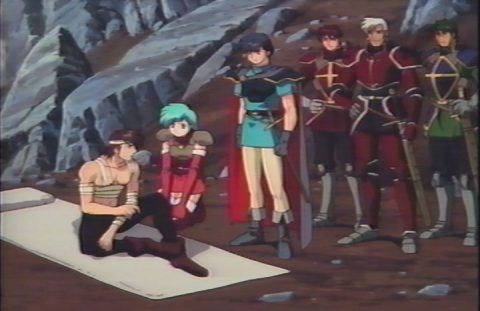 Unfortunately, that’s where the story ends abruptly. It’s really hard to get a grip on the characters, since there’s rarely much focus on them. Marth is a bit on the wimpy side and Caeda is kind of a whiny brat. The artwork is pretty standard for the time when it was made, and there are a few music themes that are carried over from the game. Had it went on longer, it might have been worthwhile, but it just sorta leaves you hanging. Oddly enough, this was translated and brought to America by ADV long before most English speakers knew what Fire Emblem was, so the connection between the game and the anime was pretty much lost, making it seem like another Record of Lodoss War wannabe. ADV decided to translate the main character’s name as “Mars” instead of “Marth.” It has only been released on VHS. 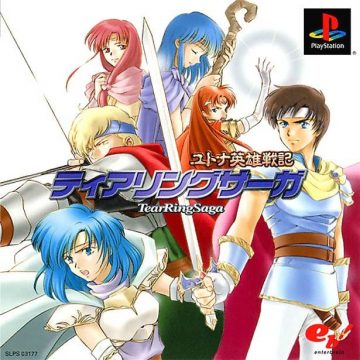 After leaving Nintendo, Fire Emblem series creator Shouzo Kaga founded his own studio called Tirnanog. One of its first games was TearRingSaga for the PlayStation in 2001, which bore more than just a suspicious resemblance to Fire Emblem. In fact, the game is almost exactly the same, right down to the interface, graphical and music style. It was originally called Emblem Saga early in development, and the hero, Ryunan, even had blue hair, though this was later changed to brown. It seemed that Kaga was creating his own unofficial sequel. Nintendo was none too pleased about this, and ended up suing them, along with publisher Enterbrain. Nintendo lost, and the game went on to sell very well. For a clone, it’s exceptionally well done, and the 32-bit graphics of the PlayStation look significantly better than any of the 2D entries in the Fire Emblem series. The PlayStation 2 sequel Berwick Saga changed the formula significantly, so it wasn’t as much of a blatant clone, but that’s a story for a whole other day. 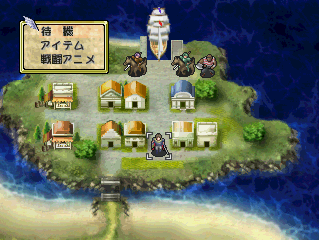 Super Smash Bros. Melee was the first time North American players were introduced to Math, Roy, and Fire Emblemin general, and it’s believed that it was because of their presence, popularity, and the curiosity surrounding them that finally convinced Nintendo to release Fire Emblem overseas. 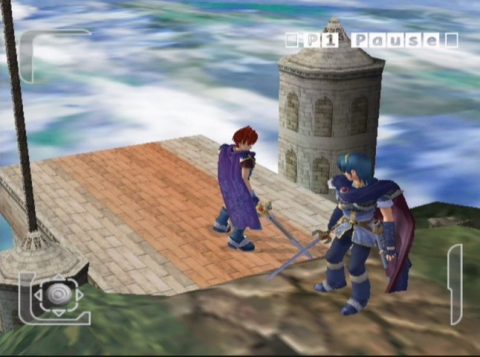 In-game, little was revealed about them, other than their trophy information, some of which was inconsistent, such as referring to Roy’s home Pherae, as a principality, when later, it wasn’t classified as such, or even false, like Marth’s kingdom, Altea, being annihilated by Hardin, when really, it was just invaded and taken over.

Something most North American players are unaware of is while Marth is an essential figure in Fire Emblem, being the first Lord, as well as starring in the most games, Roy’s presence in Melee, to Japan, was to fuel interest in Rekka no Ken, which was released soon after Melee. That’s right, Roy’s inclusion was essentially product placement, which may also explain his exclusion from Brawl. Of course, almost all of Roy’s popularity and recognition are a direct result of this, seeing as, unlike Marth, he only starred in one game, where he was an average unit, as opposed to Sigurd, Hector, Ephraim, and Ike, who were popular for being monstrously powerful in their games. 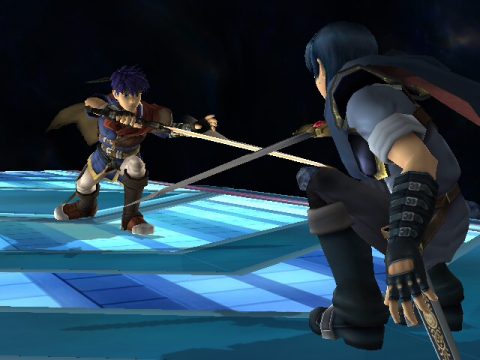 Marth and Roy both had essentially the same movesets, with Marth being the quicker, but weaker one, and Roy being the slower, but stronger one (though still pretty quick compared to similarly classified characters). Also, the tip of Marth’s (rather lengthy) sword did more damage, while the mid-point on Roy’s inflicted optimal harm.

Other than the characters and their respective trophies, the one other thing Fire Emblem in Melee was a single tune, which combined the recruitment theme from the first game with the Fire Emblem theme.

With considerably more worldwide recognition, Fire Emblem had much more presence in Super Smash Bros. Brawl. However, Roy was excluded from the roster, and replaced with Ike, who, at the time, starred in as many games as Marth (two), both of which were released overseas.

Marth kept his moveset from Melee, only this time, his Sword Dance technique (which required careful timing in Melee) was much easier to execute, and he also had the only Final Smash which could instantly KO opponents, regardless of their damage percentage, called Critical Hit, where he charges forward and slashes the first opponent(s) in his path, causing them to fly off-screen, along with HP meters rapidly ticking down to zero. The trade-off was if there was no one in Marth’s path, he would fly off the side of the screen, assuming there was no wall in the way, making it a high-risk-high-reward move. Other than that, though, he was somewhat nerfed with the length of his sword (his main advantage in Melee) being shortened.

As for Ike, he was a slow-moving heavy hitter (even though Speed was one of his highest stats in his own games), with his sword, Ragnell, having considerable reach. Despite his lacking speed, however, his side-special, after a charge up, causes him to dash forward almost instantly. His Final Smash, Great Aether, launches his opponents into the air, at which point, he leaps up after them and delivers a series of heavy slashes before slamming them into the ground; it’s a powerful move, though somewhat lacking in range. 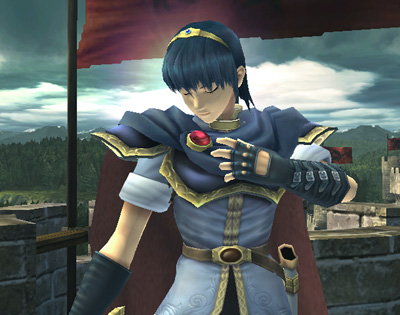 There is one Fire Emblem themed stage, Castle Siege, based on no particular location in the games, but rather exists as a reference to the series as a whole. Its starts on a castle roof, but after a certain amount of time, the background turns to a gray blur, and the stage shifts to a throne room with generic knight-class characters in the background. The area itself has statues holding platforms and destroying them destroys the platforms. Soon after, the area shifts to a fiery cavern on a large tilting platform, after which the stage resets.

As for music, there are now several themes from the series, about half of which are remixed (a couple of which are medleys of tunes from particular games), and the other half are kept in their original forms. Standing out among them is a version of the Fire Emblem theme orchestrated with a Latin choir. 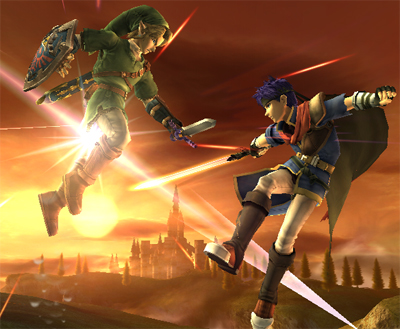 Interestingly, Caeda appears as a collectable sticker under the name “Shiida.” It’s a mystery why Nintendo of America chose not to stick with one spelling for the name…