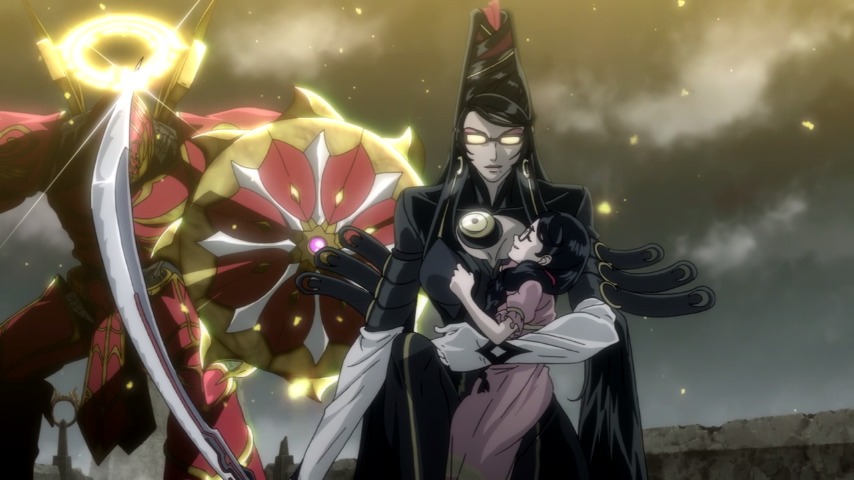 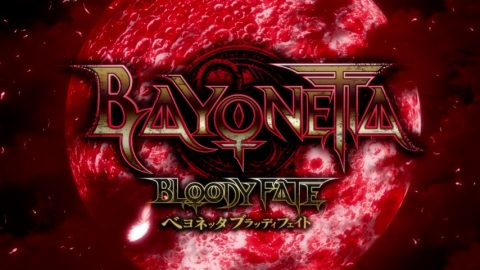 It’s not all that hard to figure out why Platinum Games thought the first follow-up to Bayonetta should be a movie. Given the three year gap between Bayonetta’s release and the announcement of a sequel, the company needed some way to initiate first time players into the series while still keeping the property fresh in the public’s mind. So Bayonetta was translated into a 2D animated film and given a limited theatrical run in 2013 – right between Bayonetta 2’s announcement and its release many months later in 2014. (This would also explain the two-part manga adaptation of Bloody Fate released in late 2013.)

In theory, everything should have worked out. Key Bayonetta staff supervised production, and the team they’d assembled looks tailor made to handle this project: direction from Afro Samurai’s Fuminori Kizaki, writing from Mitsukata Hirota (credited for his work on Hunter x Hunter and the Digimon tri movies), and production by Gonzo, a prolific studio with credits in video games like the Lunar remakes, Silhouette Mirage, Radiant Silvergun, and Zone of the Enders II. In other words, not only does the studio have extensive experience working with action-oriented games, but the staff they chose specializes in rich, stylish action that accentuates that work’s narrative. Bloody Fate is the one exception. Its misunderstanding of the Bayonetta ethos leaves it wanting for the original’s creative spark and you wondering why you wouldn’t just play the game it’s based on instead. 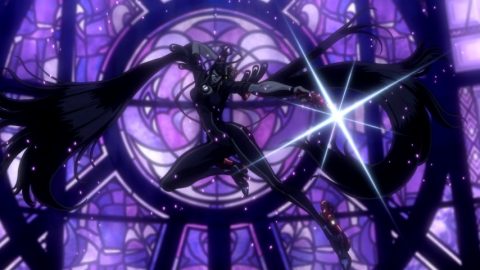 Considering Bloody Fate’s status as an unabashed retelling of Bayonetta’s story, it wouldn’t make a lot of sense to summarize the film’s plot. After all, Bayonetta never showed all that much interest in a coherent narrative and neither does the movie. The closest it comes to a plot is in Luka’s attempts to uncover Bayonetta and learn what happened to his father twenty years prior, attempts are given more weight now that the camera is free to wander away from the eponymous heroine’s side.

Given how this serves as background material for Bayonetta’s actions, Bloody Fate is still better described as a moment to moment film than anything else. It’s a format the movie can work with, especially where dialogue is concerned. In fact, it’s here where the film best understands Bayonetta’s character: her cheeky dialogue, her aloof personality, her reversal of power through sexual embarrassment, etc. All of these traits shine their best when Bayonetta catches Luka sneaking through her house while she’s taking a bath – she’s much less concerned with Luka’s impotent attempt to catch her off guard than he is with her revealing him as a pervert – but it’s by no means the only moment where the film’s talent for dialogue shines.

Despite that talent, Bloody Fate isn’t all that interested in moments like these. They serve as background material to its expected interest: the various fights its heroine jumps between. It’s in these flashy sequences where the most elaborate animation shows up; where some of the film’s most memorable moments are, like Bayonetta’s transformation sequence; and where Gonzo’s most intricately laid out plans should pay off.

Unfortunately, they’re also the source of the film’s greatest problems and its central irony. Despite Gonzo’s eye for adaptation – Rodin’s brief fight toward the beginning and the copious amount of “anime glasses glare” afterward are evidence of that – the studio seems to have glossed over Bayonetta’s very obvious appeal. Its “style as substance” philosophy, its playful whimsy, its joyous celebration of life born from an aesthetic abandon – none of this is present in Bloody Fate. Some of that stems from budgetary constraints, confusingly enough. For a film that’s already struggling against its own budget, the cartoonishly exaggerated choreography Bayonetta calls for is out of the question. 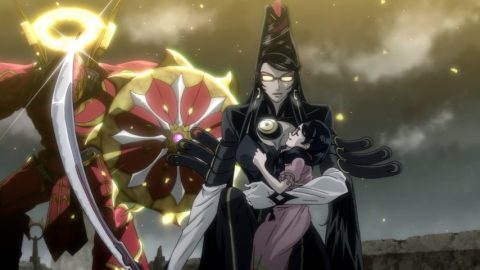 What ends up taking their place reflects a more fundamental skewing of priorities that no budget could hope to fix. Rather than revel in self-aware genre performance, the direction instead tries to make that performance feel as organic as possible to the plot’s circumstances. The strategy backfires, removing more than it can hope to add. Bayonetta’s fighting style is just as effortless and in control as ever, but her subversive brand of sexual humiliation is conspicuously absent. In fact, sexuality in general is absent during her battles (save one moment during the Jubileus fight), because rather than acknowledge what Bayonetta’s sexuality means for her or what role it plays during these fights, the movie ignores it. Instead, it admires strength and raw physical power as ends in themselves. Her hair hound mercilessly devours its prey, and her hair fists punch through Angels’ stomachs with all the force they can muster.

You’re meant to watch in awe as Bayonetta demonstrates the power at her disposal, but the effect falls well short of expectations. At best, the scenes are so straightforward that they lack any nuance. And at worst, the action takes itself so seriously that it feels dull, muted, and emotionally hollow. Where’s the introduction where the protagonist bursts herself into the spotlight? All this Bayonetta has to offer are moves that are methodical, calculated, and planned out in advance, like she’s doing a job rather than having fun with a performance. If the direction is this stiff and unwilling to have fun, then why should anybody watching the movie feel the same?

The set design exhibits similar problems. As impressive as some of the backgrounds are (the intelligent staging and use of light makes it hard to argue otherwise), many of them lack the imaginative, almost dreamlike quality that makes Bayonetta’s fights so distinctive. At best, that quality is occluded – hidden behind dull color palettes (neutral greens, blues, blacks, and purples) and a camera whose sweeping movements, try as they might, aren’t enough to make a scene appear otherworldly. And at worst, that quality isn’t present at all, the film only giving its audience the brute fact of an area’s existence. 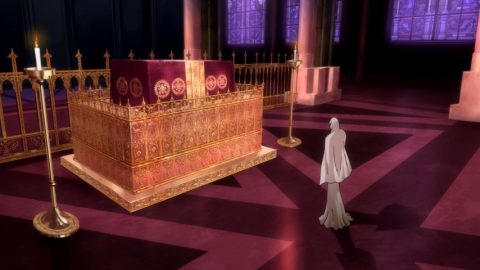 In addition, the city of Vigrid isn’t as important to understanding the events of Bloody Fate’s story. As minor a criticism as that may seem, by minimizing the role Vigrid plays in that story, the movie foregoes all the nuances that setting was able to introduce. Without Bayonetta’s journey through Vigrid (part physical, part spiritual), you don’t have the religious extremism/fundamentalism, the persecution born of that extremism, the Ithavoll Group’s corporate control (the Ithavoll Group at all, really), and all the other loose story threads that gave Bayonetta life. This isn’t to say that the movie completely lacks the game’s shades of meaning. Holding onto the Art Deco architecture and militarized vehicles allows Bloody Fate to demonstrate Vigrid’s materialistic excess and greed and its paranoia in a small amount of space. However, this raises an obvious question: if Gonzo could represent this aspect of Bayonetta just fine, what made them struggle with so many of the others?

One could argue that comparisons to Bayonetta don’t do Bloody Fate justice; that it’s possible to enjoy the film on its own terms. But it’s an argument the film resists. Its priority is mirroring the game it was based on. All the minor details it captures, like the rosemary dialogue, Rodin’s Evil Dead joke, Bayonetta’s hatred of cockroaches, etc. are proof of that. With this in mind, Bloody Fate asks from its audience not fresh eyes with which to view the film, but knowledge of the source material so the audience can appreciate just how well it sticks to the source material.  Unfortunately, it’s a self defeating approach. For every new detail that will please those who know about Bayonetta (like the brief mention of Bayonetta and Jeanne’s day jobs), there’s at least one clumsy change that will frustrate them (Enzo’s irrelevance or Cereza’s out-of-nowhere introduction). Those who don’t already know the story will be similarly frustrated whenever the story comes to a halt to deliver obvious exposition.

Moreover, it’s hard to see what the film could possibly offer on its own terms. If it’s an alternate interpretation of Bayonetta’s character, then it’s not a particularly compelling one. Most of her character remains the same and any changes the film does make, like giving her genuine moments of vulnerability, contradict that character without contributing anything in return. Some moments don’t even make sense: Balder taunts Bayonetta by saying she won’t shoot him, and then she…doesn’t shoot him, for some reason. 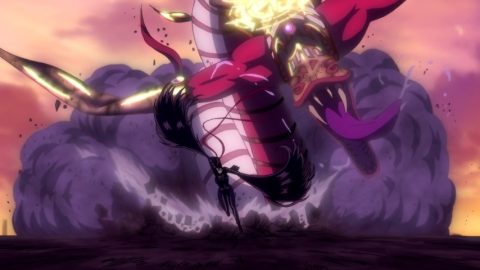 If what Bloody Fate offers is an enticing narrative, then the script doesn’t leave the film much to work with. Because every element is made to facilitate the action, the movie can’t find a lot when it wanders outside those bounds; no plot, no theme, no character (beyond Bayonetta herself), nothing. This is also why the film can’t hold up from a pure aesthetic standpoint: the animation is too thin for that to make sense. “I am not your mother”, Bayonetta tells Cereza while holding her hand up in disapproval, her pose completely static. “How dare you speak of the word love!?”, she later yells at Balder through a mildly angry glare. Of course, much of this comes down to the shift from 3D animation to 2D, but if the only way one can do Bayonetta justice is by animating it in 3D, then the movie’s entire existence might as well be thrown in question.

On closer inspection, the film’s circumstances are very similar to video games at large. For decades, video games have mimicked film in a desperate bid for cultural legitimacy. But by misunderstanding both the legitimacy they seek and the medium through they hope to attain it, these video games have doomed themselves to failure. They either replicate only a small selection of what films have to offer, or they let their own techniques atrophy as they try to mirror films. Even if Bloody Fate’s problems emerge from a different place, they’re fundamentally the same as those video games have struggled with for decades. Its efforts to say faithful to the Bayonetta brand only serve to highlight its own confused identity, and the potential inherent in 2D animation goes unrealized. Given how much Bayonetta relies on the language of film, one would imagine Bloody Fate’s job to be an easy one. Apparently that wasn’t the case.