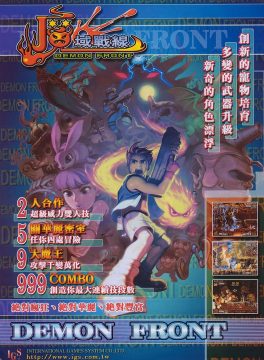 Taiwan-based developer IGS is primarily known for their PolyGame Master arcade hardware, and along with it, a whole slew of Final Fight-style beat-em-ups. Demon Front, release on 2002, veers away from that direction though, and instead pays homage/rips off SNK’s Metal Slug.

In Demon Front, you can choose from one of four characters: Jake, a human from earth; Sara, another human, with purple hair; Dr. J, a cool scientist who looks like a cross between Cyclops from X-Men and Gordon Freeman from Half-Life; and Maya, a human-looking ape. You go through six levels, with three being selectable from the start, two more that are unlocked after, and one that is revealed at the very end. 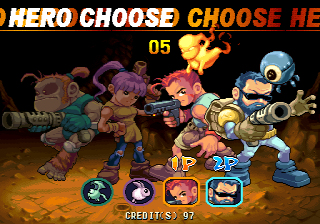 Visually there are some strong parallels to Metal Slug, even if it does feel a little… off. The designs are a little strange, straddling the line between super deformed and merely cartoonish, and the enemies are strangely chubby. The color palette has more saturated colors, giving it a brighter feel. Plus, the game runs at 60 FPS, rather than Metal Slug‘s 30. While superior from a technical standpoint, combined with the “almost-but-not-quite-the-same” graphics, it gives it a kind of offbrand, daytime soap opera feel. Still, the pixel art is very well done, and everything is generally well animated. 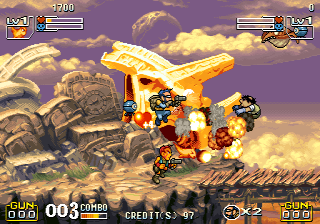 The controls are fundamentally the same as Metal Slug, though the pacing is a little faster. Additionally, each player has their own unique flying pet, which hovers about their shoulder. Holding down the fire button will unleash a special attack – Jake’s pet is some kind of dragon that unleashes a barrage of flames. Dr. J’s pet is a one-eyed robot that creates a field of electricity. Sara’s pet is a rabbit that creates homing projectiles that freeze whatever is in their way. And Maya’s pet is a pterodactyl that creates wind blasts in a spread formation. Holding the jump button also makes the characters float as opposed to hovering down like they usually would. 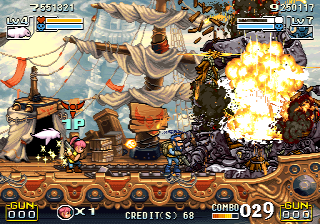 The C button will also turn your pet into a shield, which can protect against various projectiles. However, the pet has its own life bar, and if it runs out, the pet disappears until the player dies and respawns. Life can be regained for the pet by knifing various enemies up close (done the same as in Metal Slug). There are the usual special weapons with limited ammo, with some interesting weapons like a freeze gun. The machine guns are handled out regularly too, so you’re rarely stuck with the regular old default pistol for too long. 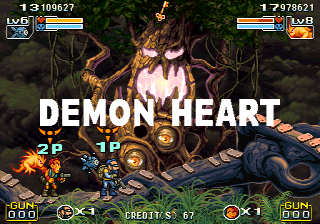 Each stage is plainly announced with gigantic letters and a booming announcer, having been granted such descriptive titles as “Falls,” “Snow,” and “Temple”. The bosses are announced with similar gravitas, and they include several Metal Slug-type enemies (giant enemy crab, several mecha-looking beings), along with other offbeat creations (a giant tree). After a boss is defeated, it reverts to a weaker form as a possessed artifact flies out of it. You then have to shoot this artifact in order to get as many bonus points as possible. At the end of a playthrough, a code is given to the player for them to enter online and see how they rank against other players who registered through the site. 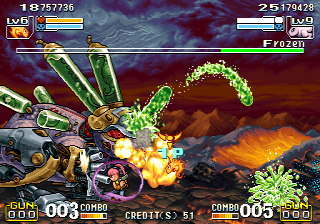 Demon Front is shameless, but for a clone, it’s actually pretty good. The pets are an interesting addition, and there are enough weird things about it that shows the developers were not only a fan of SNK’s series, but added their own odd sensibilities to it too.