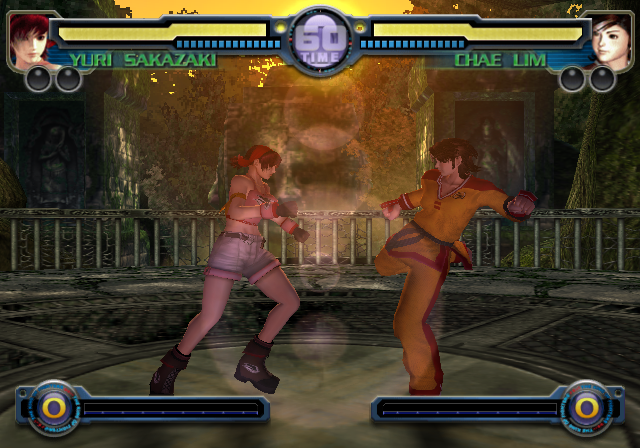 In years prior, SNK didn’t exactly have the greatest of luck with 3D games. The Hyper Neo Geo 64 tanked, and the two PlayStation ports from the system – Fatal Fury: Wild Ambition and Samurai Shodown: Warriors Rage – weren’t exactly what one would call good. But SNK gave 3D another shot with KOF: Maximum Impact for the PlayStation 2, and it actually turned out pretty well.

Calling this game King of Fighters is a slight misnomer, and it’s not without reason SNKP always keeps it shortened to KOF in the official titles, at least in Japan. The single player game focuses on choosing only one character, and the gameplay is a bit closer to a 3D version of Real Bout Fatal Fury. Even the plotline – two brothers fight against an evil syndicate in South Town – is basically a retelling of the original Fatal Fury with new characters. Of course, in addition to the six new characters (aforementioned brothers Alba and Soiree Meira, sexy assassin Lien, bubbly magical girl Mignon, tae-kwon-do student Chae Lim and nefarious crime lord Duke), there’s a healthy number of returning faces from the main series, including Terry, Mai, Ryo, Yuri, Leona, the Ikari Warriors, and a few others – in other words, the most popular characters. This also marks the first time Rock Howard has officially appeared in a “King of Fighters” game. There are twenty characters total, which is a little low for the series but pretty decent for a start-up 3D fighting game. 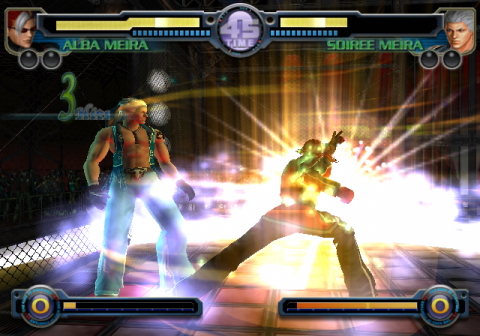 Although the graphics are 3D, the gameplay is all 2D, except even faster. It’s perhaps a little too fast, especially when characters execute jumping uppercuts far quicker than they normally would. Power bars replenish quickly, allowing you to use special moves with great abandon, combos are easy to pull off, and the whole game feels much tighter than any other 3D fighter ever made. The tradeoff is that it might be a bit too simple and cheesy for those who take their fighting games seriously.

While reinventing the series for 3D, artist Falcoon drafted an alternate costume for each of the characters. More than simply new outfits, these are entire redesigns of known and loved fighters, and more than a few of them are a bit weird. Still, you needn’t bother with them if you don’t like them, and the regular characters’ costumes and animations are replicated almost perfectly. The music is composed by Toshikazu Tanaka, also known for Rage of the Dragons, Matrimelee and Metal Slug 5. The furious pace of the soundtrack fits the game brilliantly, even if it relies too much on goofy English (and occasionally Korean) rapping. 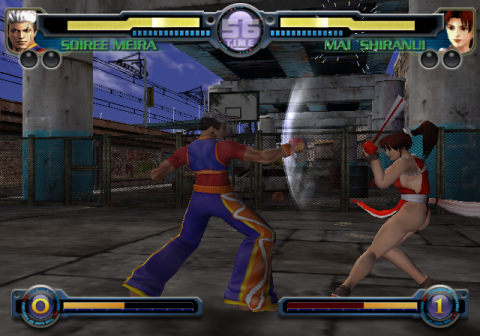 King of Fighters Maximum Impact for the PlayStation 2 was released in a double disc package with a bonus DVD featuring interviews with the developers. Unfortunately, the American version only features English voice acting for all of the characters. While some of the voices are pretty good, most aren’t, and it’s a bit strange to hear fighters yell out the names of their attacks in English. The European release adds dual language tracks. SNKP also released King of Fighters Maximum Impact Maniax for the Xbox, which features both language tracks, as well as a picture-taking mode and online play. Unfortunately, it’s missing the bonus DVD.