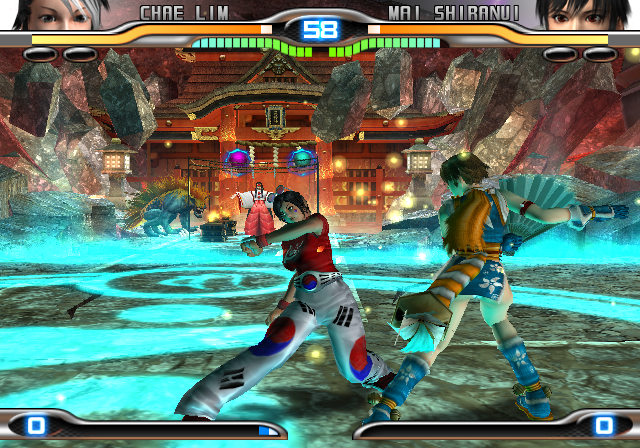 KOF Maximum Impact 2 (known as The King of Fighters 2006 in the US due to bizarre marketing reasons) remains pretty faithful the original game, but adds a lot of cool extra stuff. You can now sidestep and super cancel certain moves, but otherwise, it’s pretty much business as usual. Five entirely new characters are introduced – Nagase, an oddly dressed ninja girl; Luise Meyrink, a silver-haired witch, Mignon Beart’s evil sister Ninon, Billy Kane’s sister Lilly and Jivatma, the final boss. There are also a few other characters that make their first 3D KoF appearance, like Kula, Kim Kaphwan and Billy Kane. A few visitors from other series can also be unlocked: Fio originated in Metal Slug and brings a couple of her guns, ninja Hanzo Hattori comes straight out of the feudal Japan of Samurai Shodown, and Fatal Fury veteran Richard Meyer shows off his capoeira moves. The graphics are roughly on the same level as the original, although some of the modeling has been improved, which results in some much better looking faces. The music is much the same style, and while it removes most of the rapping, overall it’s not quite as good. 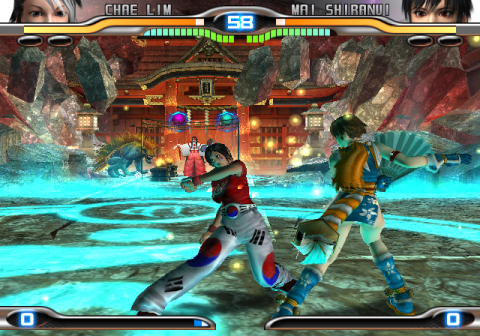 But the best aspect of MI2 is the extraordinary amount of cool unlockable bonuses. A good portion of the cast has to be unlocked, and every character has a huge number of costumes, many based on other characters. Geese cosplays as famous SNK bosses (like Goenitz and Krauser), while Ralf can dress up like Marco from Metal Slug, and Chae Lim puts on May Lee’s cute blue frog shirt. There’s tons and tons of SNK love, including a rendition of the long-closed Neo Geo Land arcade, which features music directly from all kinds of classic Neo Geo games. Maximum Impact 2 is the first game directed by Falcoon, and it’s obvious that he knows what the fans want.

Geese as Karman (Art of Fighting 3)

Chae Lim as May Lee

Chae Lim as Hinako (Buriku One)

Rock as Kain (Mark of the Wolves)