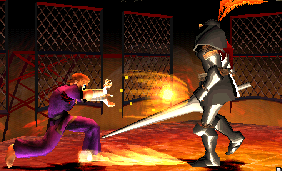 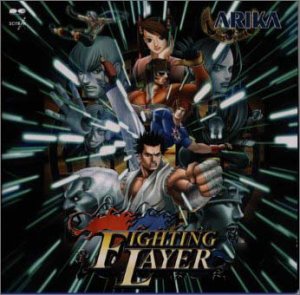 The developer Arika was built from former Capcom employees, yet their first major game was the Capcom co-venture Street Fighter EX. Perhaps wanting to escape the shadow of their parent company, Arika decided to make a fighting game of their own without any involvement from Capcom, instead published by Namco. While the resulting game of Fighting Layer failed to make much of a public splash, it was nonetheless a competent attempt that turned out a respectable fighter. Naturally, it’s in 3D like Street Fighter EX, as 2D fighters were mostly on their way out thanks to Tekken and Dead or Alive. 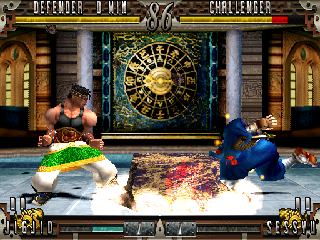 There are twelve normally playable characters, some of which are pretty standard and others which are just way out there on the wacky meter. There’s Tetsuo Kato, the basic spiky-haired karate guy, Lan Yinghua, the also fairly normal Chinese fighter girl, Hong Gillson, a major ripoff of Hwoarang from Tekken, George Jensent, a funky fighter somewhat evocative of Johnny Cage, Sessyu Tsukikage, the requisite mysterious ninja, Jigjid Bartol, an earthbender long before the Avatar series existed, Exodus, a crazy wrestler possibly based on Goldust, Janis Luciani, an insane green-haired assassin with knives and pistols, Shang Fenghuang, another assassin and the obligatory white-haired bishounen, and Cappricio, a freakish witch doctor who looks a bit like Giger’s xenomorph. Guest starring from Street Fighter EX are the shoto Allen Snider and the revealing Blair Dame, both of whom oddly never starred in the SFEX sequels after this game.

Not surprisingly, the mechanics are very similar to SFEX, with the key difference that all arenas are walled instead of taking place in the open, providing opportunities to trap opponents in the corner. It also allows for sidestepping by tapping forward and either fierce punch or kick. Most other mechanics are par for the course, like autocombos and escaping throws, but the most interesting element is the “Super Elusion.” If you get knocked back, press all three kick buttons before hitting the ground and you roll far from your opponent, gaining a maxed-out super meter right after. You can only do a super escape once per match, as the gold dragon icon beneath your character’s name loses its luster. It’s an interesting boost that could give you the edge you need to turn the tide in a fight, even though the notion of instantly filling super meters is not something that would fly in most “balanced” fighters today. 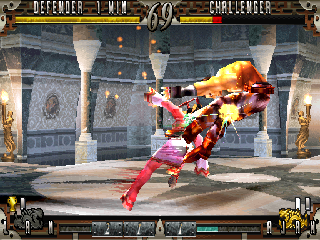 All fighting games are best played amongst two (or more) people, but there’s always something to be said when a fighter puts some effort into its single-player gauntlet. Fighting Layer has a structure actually denoted by a map screen, but your first two fights are conventional aside from the fact that your character’s theme music plays instead of the opponent’s. The third fight is a miniboss battle against a hulking armored knight, slow but strong. It can only be seriously damaged by throwing it after stunning it with a super, and you only get one chance to win, where losing affects your choice for the sixth match. The next two fights play out normally, then after your fifth opponent, you get a choice as to your next two opponents, but only if you beat the knight earlier. You get to pick your poison between fighting a shark, a tiger, or a giant hawk, all of which have a limited moveset but immense strength and/or agility. You’re forced to fight the shark if you blew it against the knight, and it’s arguably the toughest opponent as your battle is underwater with hampered speed. The tiger is the smartest of the three and can roll to avoid your attacks, and the hawk is the hardest one to hit for obvious avian reasons. You only need to win one round against an animal, but that’s also all they need for you.

Depending on which animal you’ve angered PETA with, your next battle is against a human sub-boss, all three of which can be playable by fiddling with the dipswitches. The hawk leads to Joe Fendi, an agile boxer who seems to have ripped off Zack from DoA. The tiger goes to Preston Ajax, a cyborg soldier who uses wires and explosions in similar-yet-not-quite ways to Doctrine Dark from Street Fighter EX. The shark is before Clemence Kleiber, a powerful old-school German wrestler with an eyepatch with no gimmicks aside from raw power. Regardless of whom you face here, you will face the incredibly bizarre final boss: Vold Ignitio, a well-dressed nobleman who fights and sounds like a feral animal. He leaps around like Vega, counters your attacks by hitting you with the exact same attack, and his super move has a large gun emerge from his crotch and spam unblockable projectiles. If you do well enough throughout your battles, you may get to face the knight again, though super-powered and a lot harder to stun. You also only get one chance to beat it, as is the case with these secret fighting game superbosses, but the precise criteria on facing the iron man is currently unknown. 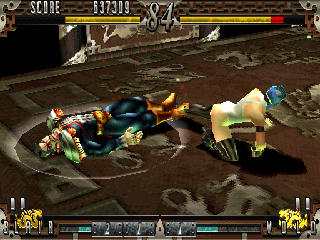 Fighting Layer is not the most original or remarkable fighter ever, but it has enough quirkiness with its cast to be memorable enough for those who have played it. It was released in an odd time where fighters, while still quite popular, had slowly begun to phase towards a niche crowd with more complex factors making them less appealing to anyone who grew up on the relatively simple Street Fighter II. The big fighter companies like SNK and Midway continued to produce games in their most popular series, so anything that wasn’t a King of Fighters or Mortal Kombat fell to the wayside. Fighting Layer faded into obscurity without any home ports or even releases outside of Japan, but it’s worth playing just to settle the ninja vs. shark debate once and for all.