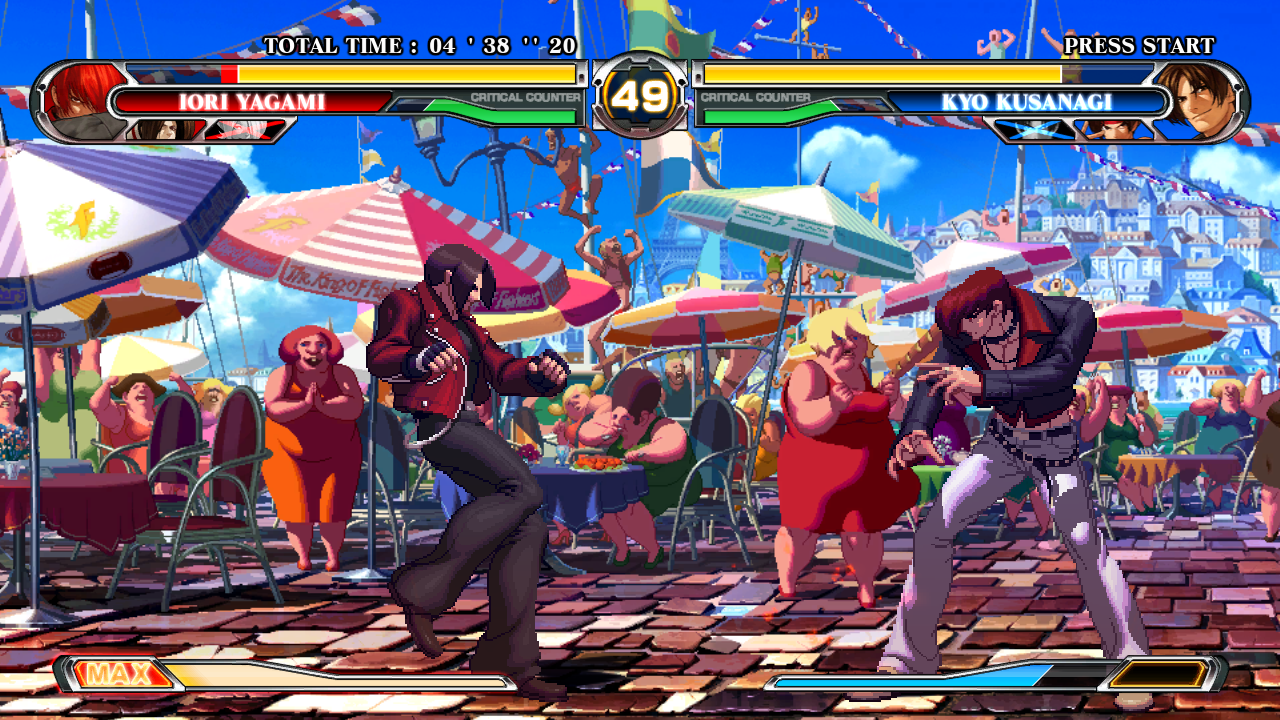 The King of Fighters XII represents a radical shake-up for the series. It’s the first since the golden days of 2D fighters to have completely new character sprites, done at twice the resolution as the previous games. And it looks fantastic. The art style retains all of the skillful design of its ancestors, but with improved detail. It looks fantastic in motion, too, with some quality animation that outshines the previous KoF games (although not Mark of the Wolves and Street Fighter III, still the most smoothly animated 2D fighters out there.) It’s also the first 2D KoF that utilizes a scaling camera, and the sprites are absolutely huge when fully zoomed in. It does look a bit old fashioned when stacked next to Arc System’s Blazblue, the spiritual successor to Guilty Gear that has sprites at an even higher resolution, but KoF XII‘s sprites are still more detailed and better animated, if not quite as crisp. Nona returns as the character artist, and he’s improved significantly since KoF 2002.

The new poster feature to the system is called “Critical Counters”. Similar to the Revenge meter from Street Fighter IV, it’s a secondary gauge that fills up as you take damage. Once it fills, you can execute counters while standing still and pressing an attack button, but only for a limited time. If timed correctly, the opponent is stunned and vulnerable to custom combos, similar to those from Street Fighter Alpha 2 (and the V-ism from Street Fighter Alpha 3.) This can potentially cause skeezy opponents to spam Critical Counters when they’re activated, although they’re not too hard to punish. Reminiscent of weapon-based fighting games is the “Sousai” or “Deadlock” effect when two characters hit each other at exactly the same time, repelling them both. There’s also a Guard Attack, which is essentially a counter move for every character that executes a blowback when attacked. 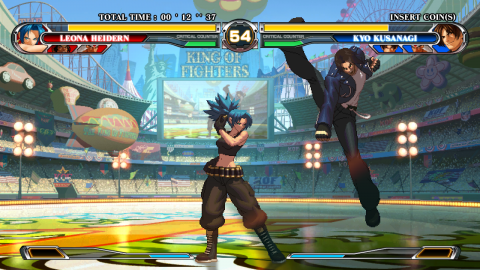 It’s nice to see SNK try to modernize the visuals, but it came completely at the expense of everything else. The character roster is the smallest it’s ever been for the series, topping out at 20 in the arcade version and 22 on home consoles. The selection largely hearkens back to the early days, bringing back Andy and Joe, but removes other long time stalwarts. Mai, King, Blue Mary, Yuri, and Takuma? All gone. All of the NESTS saga folks are AWOL too, so that means no Kula, K’, Vanessa, Maxima or Whip. The stars of the Sacred Treasure arc – Ash, Shen Woo, and Duo Lon – are all here, and Elisabeth shows up in the console release, but otherwise it’s all older characters. The console version also adds Mature, who now has an eyepatch. The only really “new” character, at least for King of Fighters, is Raiden/Big Bear, who initially appeared back in the original Fatal Fury. The fighting itself also plays out like older games on the series. The tag-team switching is gone completely, and the action is a bit slower than it used to be in KoF 2003 or XI.

The characters also have significantly dwarfed movesets. Most only have two or three specials, and only one super. Many characters play very differently as a result, sometimes for the better (like the drastically redesigned Kensou, who now wears his Chinese uniform from Psycho Soldier), others for the worse (such as Iori and the lack of his purple flame attacks.) Much of the timing and range for the existing moves has changed, too. 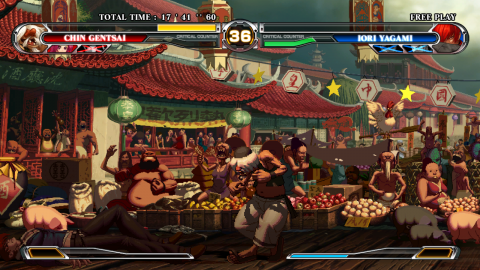 The rest of the game feels remarkably barren. There are only five backgrounds that, while nice looking, feel sparse and empty. What little music there is is barely memorable. Since this is technically a Dream Match game, there’s no story, no predetermined teams, and no ending. The single player mode is just a standard time attack. The console versions feature online play, but both the 360 and PS3 versions suffer from inefficient network code.

While KoF XII is still technically a solid game and looks quite fantastic, it feels remarkably incomplete. It suffers from the same problem as Capcom vs SNK, Street Fighter III and other first installments in new series – the content just isn’t there, and it ends up lacking compared to what’s come before it. Indeed, when it was released in Japanese arcades, it was trounced by The King of Fighters 2002 Unlimited Match, which despite being the remake of an older game, has three times as many characters and substantially more features. As such, The King of Fighters XII really just serves as a stepping stone to the 13th episode.