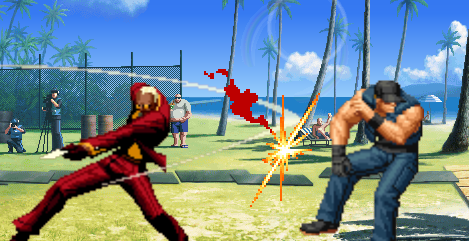 After messing around with the Atomiswave for NeoWave, SNK finally got back on track with The King of Fighters XI, which drops the yearly subtitle in favor of a roman numeral. The tag system from 2003 has returned, with some minor changes to the tagging attack and Super Cancel system. Now there is a separate “Skill” stock for these maneuvers, so some of them no longer consume the regular power stocks. You can also immediately switch a character out of the match by using both Skill stocks, which is useful if they’re being pummeled by a powerful combo. 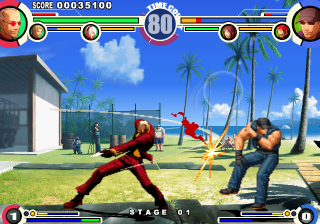 The high-res 2D backgrounds are pretty decent, and the fancy artwork by Hiroaki shows off some of the best character portraits of the series. All of the music was composed by SHA-V, who is known for guitar-heavy songs like “Goodbye Esaka”. The soundtrack is a mixture of that same rocking attitude, mixed with the hard electronica of KoF 2003. Also, there’s now a gauge beneath the timer that determines who is “winning” the match, based on performance – if the timer runs out, this gauge will decide the winner, as opposed to basing it on remaining health. Also new are Dream Cancels, which is like a regular Super Cancel, except for Leader Desperation Moves. 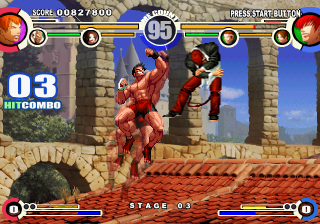 The new combatants this time are little girl dancer Momoko, card-wielding badass Oswald, and the classy dominatrix-style Elisabeth, along with Duck King from the Fatal Fury series, and B. Jenet from Mark of the Wolves. The new sub-boss is Shion, an androgynous spear-wielding fighter, and the final boss is Magaki, who’s pretty close to Onslaught from the Marvel vs Capcom series. Needless to say, he’s remarkably cheesy. There are also several hidden subbosses from other SNK titles – Gai Tendo and Silber from Buriki One (a Hyper Neo Geo 64 game) shows up, as well as Hayate and Jazu from Kizuna Encounter. Some of them seem a bit out of place (especially Jazu), but it’s cool to see SNK grabbing from their lesser known series. The problem is, a lot of old favorites have been removed from the roster – Andy is still missing, and Joe, Leona, and Mai are gone as well, at least in the arcade version. 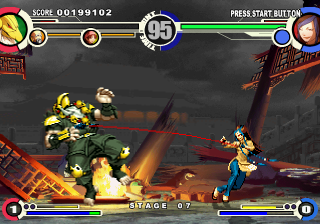 Thankfully, the PlayStation 2 port adds a bunch of exclusive characters: Mai, Robert Garcia, Geese Howard, Mr. Big, Hotaru Futaba, and Tung Fu Rue. They are the same versions as found in Neo Geo Battle Coliseum. All of them are unlocked through the Mission Mode, which offers over forty challenges, most of which are pretty difficult. There are plenty of additional endings, several new 3D backgrounds, and a few remixed character-specific songs (“Diet” from Art of Fighting 2 for Yuri, “Big Shot” from Fatal Fury 3 for Terry, “Bad Girl” from Mark of the Wolves for B. Jenet and “Still Green” from KoF 97 for Shingo.) Surprisingly, the load times are even shorter than in the arcade version. It also features the original “Arcade” as well as an “Arrange” mode, which changes some of the character balancing. 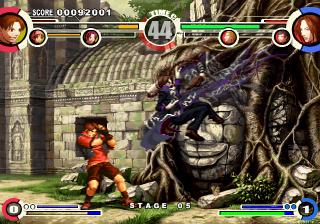 KoF XI is undoubtedly one of the best, most refined entries of the series, both in gameplay and presentation, and shows that SNK Playmore still knows what they’re doing after all these years. The PAL release, however, contains a number of glitches. The North American version published later fixes all of them, but neither version has the progressive scan option that’s available to Japanese players. 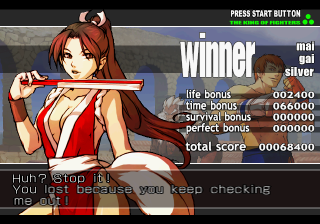